Thirty Seconds to Mars touches down in the Valley this weekend. Ticketmaster

Stephen Malkmus rides into town this weekend.
Giovanni Duca
Christopher Cross
Saturday, July 21
Talking Stick Resort in Scottsdale
What was with all the flamingo imagery on Christopher Cross's albums, and just what the hell was between the moon and New York City that made us want to fall in love? The San Antonio native (and tight bro with Michael McDonald) was one of the 1980s' greatest soft-rock success but was undone by the increasingly image-hungry landscape that came with the rise of MTV. Cross was a bigger guy, sort of a cross between Meat Loaf and the Minutemen's D. Boon, with the voice of an angel.

His 1979 self-titled album came preloaded with three schmaltzy but catchy hit singles in "Sailing," "Ride Like the Wind," and "Never Be the Same." Co-written by Cross, Burt Bacharach, and two others, "Arthur's Theme (Best That You Can Do)," from the 1981 film starring Dudley Moore, won an Oscar for Best Song and remains Cross's most enduring hit. His 1983 follow-up album, Another Page, only birthed one single in "Think of Laura." Cross has never quite had the success of those first five but continues touring to this day. Craig Hlavaty

A scene from last year's Desert Splash pool party.
Benjamin Leatherman
Desert Splash
Saturday, July 21
Four Points by Sheraton Hotel
We’ve officially reached peak pool party season, . On any weekend in the Valley, there’s any number of swank or dank swim celebrations happening, any of which are likely to suit your particular music tastes. Case in point: this weekend’s Desert Splash at the Four Points by Sheraton hotel in south Phoenix, which is aimed at fans of hip-hop, , and R&B sounds — and anyone who wants to party hard for 12 hours strong.

The stylish event on Saturday, July 21, will be a round-the-clock rager that will consist of a “Miami-style” pool party called Wet and Wild that takes place during the day, followed by the Grown and Sexy pajama and lingerie affair at night. The poolside partying kicks off at 2 p.m. with spins from DJ Pest and DJ Klassic. Dallas-born rapper Dorrough Music will also perform, and separate swimsuit and male contests for cash prizes will take place. Food, drinks, games, giveaways, hookah, and vendors are also planned. Keyke On Pointe will host.

The pajama and lingerie party starts at 9 p.m., will be hosted by Charmaine Johnise of Black Ink Crew: Chicago, and will feature DJ NC Slim in the mix. General admission is $40, which covers both parties. VIP tables for Grown and Sexy are $150 and VIP pool cabanas at Wet and Wild are $200. Call 602-428-1037 for more info. Benjamin Leatherman

Thirty Seconds to Mars
Sunday, July 22
Ak-Chin Pavilion
People dismiss Thirty Seconds to Mars simply because of what frontman Jared Leto does away from a microphone. Whether it's his method acting, his serious earnestness, or fame because of his acting career, one can easily minimize a band that continues to have a huge audience.

Sounding like a mix between U2, Coldplay, and Nine Inch Nails, Jared and his brother Shannon are promoting their latest release, America. Pared down to the brothers with hired help (longtime guitarist Tomo Milicevic left the band this year), the band keeps putting out music that confounds people who don't buy tickets while speaking directly to those who buy them.

Since its release in April, America, which hit No. 2 on the Billboard 200 and yielded three singles thus far ("Walk on Water," "Dangerous Night," and "Rescue Me"). As you'd expect, their current tour is in support of the album. It rolls through the Valley this weekend featuring Walk the Moon, K.Flay, and Welshly Arms as openers. Eric Grubbs

Stephen Malkmus & the Jicks
Sunday, July 22
Crescent Ballroom
If you had to sum up Stephen Malkmus’ music with one expression, “whatever’s clever” would be right on the money. The singer and songwriter, currently on tour with his band the Jicks, has been known for his genius wordsmithing for years. He’s been skillfully turning sharp and funny phrases he started the band Pavement back in the late 1980s. It was in 1992 when that band released their debut Slanted and Enchanted and Malkmus’ sardonic wit was cemented as one with the ability to slay. was also instrumental in the lo-fi indie rock boom of that decade.

The Jicks got going in 2000, around a year after Pavement threw in the towel. Going strong ever since, the band released their seventh album earlier this year, Sparkle Hard. A dynamic group of tracks, it glows with appeal. The poppy nature of songs like “Bike Lane,” however, can’t lighten the subject matter. In that case, the tune is about the 2015 murder of Freddie Gray by Baltimore police. True to the group’s history, catchy and steadfast tracks often transcend between mild, plodding rock and more aggressive riffs. Amy Young 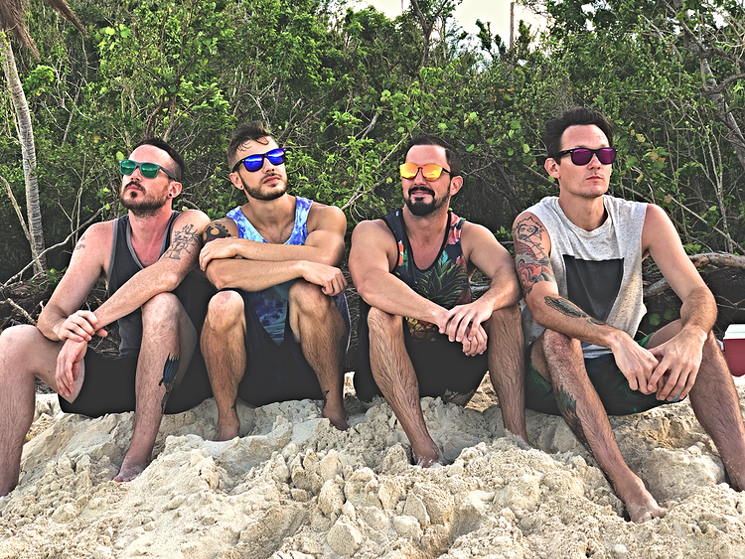 The boys of Ballyhoo!
Courtesy of Ballyhoo!
Ballyhoo!
Sunday, July 22
Pub Rock Live in Scottsdale
The all-knowing internet defines "ballyhoo" as "a buildup, hoopla, fanfare." And no title more aptly describes the musical output produced by the Aberdeen, Maryland, reggae/rock/punk fusion quartet known by that handle. Add an exclamation point to the end – Ballyhoo! – and one can already imagine the level of merriment set forth by this lively troupe before even pressing play.

The group has been on the grind since 1995 but only recently started making inroads in the music business. A successful jaunt across the country during the Vans Warped Tour in 2012 and an impressive showing on the Billboard charts for its self-released album, Pineapple Grenade, in 2013 helped them gain real traction. It's been a long time coming for Ballyhoo!'s lead singer, Howi Spangler, who, as a Green Day- and Goldfinger-obsessed teenager, began writing his own pop-punk and ska creations. He hoped to separate himself from the hip-hop and mainstream rock environment that dominated his suburban Baltimore confines.

Spangler and company toured constantly after high school, performing at house parties and high school gyms. The four-piece, slowly but surely, began earning a reputation as a fun-loving, party-starting type of band and roping in scores of fans. Alex Rendon

There may be a hint of his drum-and-bass roots, but Fingers' aesthetic absorbs everything and spits out a mind-fucking mélange of a mix, a dance-floor diversion that destroys the lines among wildly divergent styles. Everything and anything is fair game, from Daft Punk and Justice to Architecture in Helsinki and Squarepusher. It's an approach that might make dance-music purists sneer, but goddamn if it isn't a stupid amount of grin-inducing, butt-shaking fun.

This weekend, Treasure Fingers will get faces grinning and rumps shaking at Shady Park in Tempe during the latest TreeHouse Sunday session. GAWP, Devon James, and Austin Feldman will open. The music starts at 3 p.m. Tickets are $15-$20. Britt Chester