Demi Lovato and DJ Khaled Popped Off in Downtown Phoenix 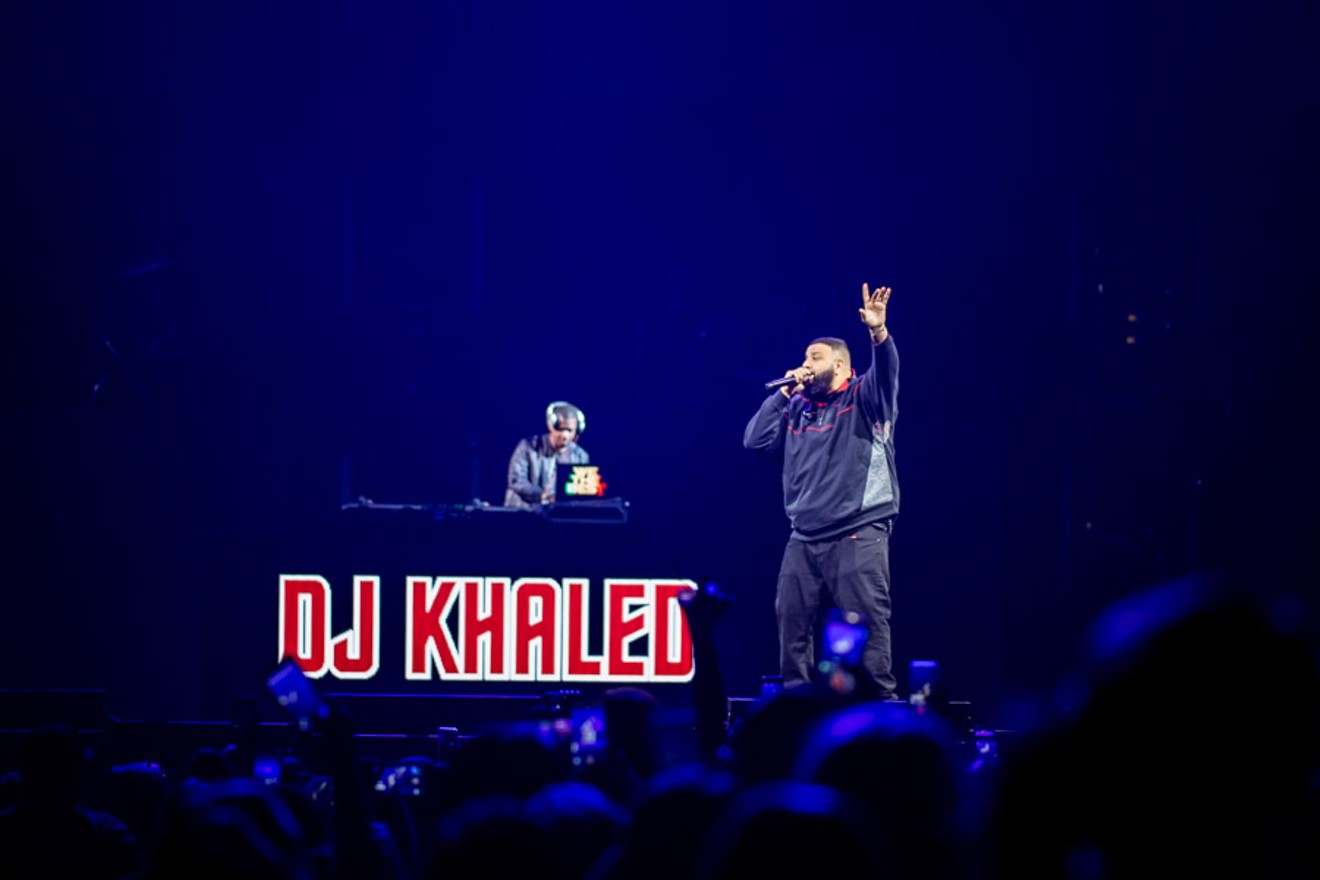 DJ Khaled got the crowd pumped and ready for Demi. Leavitt Wells
"He's such a fucking nerd."

A girl behind me says this to her friends with a chuckle, pointing at DJ Khaled, who's opening for Demi Lovato at Talking Stick Resort Arena in downtown Phoenix  She sounds bemused, though there's a tinge of malice in her voice. Of course, Khaled can't hear her. She's sitting far from the stage as he stands on the lip of a raised platform, turning his back on the standing-room floor so he can Snapchat the crowd.

DJ Khaled's set is over but he's still onstage, playing with his phone and taking snaps for about three minutes. There's a microphone plugged into his phone, but no one in the arena can hear what he's saying. That's probably a small mercy.

It makes sense that DJ Khaled, in many respects a more famous figure than Demi Lovato, would be the opening act for her tour. But the difference between them is simple and stark: Demi Lovato is a performer. DJ Khaled is not.
That's the thing about Khaled. Put him in front of a late night TV show camera or his own phone, and he's gold. He's got an earnest, absurd personality that's perfect for that kind of media. But he's not a singer, he's not a rapper, and he doesn't bother to pretend to DJ live.

So what exactly is a DJ Khaled live set supposed to consist of?

On March 4, his show started with an inspirational video where he talks about how much he loves his son. DJ Khaled loves his son. A lot. He talks about him. A lot. Think of that person you know on social media, the person who just had a kid and now everything they post is about their kid. That's who DJ Khaled is right now. It's the most endearing thing about him. The whole time he's onstage, you get the sense that he'd much rather show us all the baby pictures on his phone than play music.

DJ Khaled wandered around the stage, repeatedly inciting the crowd to raise hands and sing along — basically do all the heavy lifting for his set while an actual DJ stood behind him mashing the buttons. He played all the cliche crowd-work hits: "Which Side Is The Loudest," "Let Me Hear You Make Some Noise," "I Want To See Some Cellphone Lights," and "The Children Are Our Future, Let's Hear It for the Children."

He didn't do much beside offer "big ups" to all the moms and pops in the audiences and get the crowd to sing along to Bell Biv Devoe's "Poison." He played snippets of club bangers. Some of them were his own productions, and some of them were, well, Bell Biv Devoe. The highlight of his entire set was a pearl of wisdom he dropped after doing a bit of dancing that would have made Carlton from The Fresh Prince shake his head in disgust: "Don't act like you didn't see me lose 30 pounds just now ... but I don't lose weight, I get rid of weight, because all I do is win."

DJ Khaled may not do much of anything, but he wins by doing it. Even when he gets lost at sea on a jetski, he still wins. He is "The Triumph of Mediocrity (Extended Club Remix)."

Lovato also started her set with an inspirational video. It was a montage of different scenes, showing the pop star psychoanalyzing herself, training under UFC fighter Randy Couture, lounging in white lingerie. These were all scenes that Demi would re-enact onstage. It was like watching a quick trailer of the concert we were about to watch.

Lovato rose from a hole in the floor in a getup that looked like a cross between a black dress and a trench coat. She sang "You Don't Do It for Me Anymore" alone onstage. Her voice was loud and clear, while her presence and technique are impressive.

Reclining on a psychiatrist's couch to sing "Daddy Issues," Lovato was now accompanied by a team of backup dancers. The band was also revealed. Instead of being onstage with her, they were behind the projector screen, separated into three different open chambers that looked like peepshow rooms.

Throughout the night, Lovato and her dancers would execute a series of lightning-fast costume changes. The trapdoor that Lovato first emerged from was the MVP for the night and used constantly during her set. She would drop in and reappear in a pink boxer's robe or wearing the white nightgown from the video, or a dress that looked like it was made out of black fractal crystals.

The choreography for the dancers kept getting switched up too, so they never wore out their welcome. For "Dirty Sexy Love," they did synchronized chair dancing, pulling off a routine that blended Bob Fosse and Flashdance. Dressed up as B-boys, the male dancers sprang into the air like they had jumped off trampolines as Lovato sang "Heart Attack."

Lovato and her dancer during "Cool for The Summer."
Leavitt Wells
And in the most interesting bit of stagecraft that night, Demi pulled off a neat "everywhere at once" trick for the song "Games." Getting all the female dancers to dress exactly like her, they were arrayed across the arena — standing on stairwells, posing in the glass boxes the band performed in, cavorting on the wings of the stage. Demi would keep vanishing during the song and "magically" reappear across the room seconds later.

This wouldn't be the only time the crowd got to play "Where In The World Is Demi Lovato?" The singer would later disappear and re-emerge on a rotating bed on the other side of the arena. Holding a guitar, she sang "Cry Baby" while lounging on white sheets.

Lovato engaged the crowd in interesting ways throughout the night. After pulling off one slick choreographed pop number after another, she broke the ice with the crowd by taking a page from the sporting events playbook and using a "kiss-cam" for "Give Your Heart a Break." The camera bounded across the arena and everyone caught in its cross-hairs played along: friends, straight couples, and queer couples all laughed and kissed when they showed up on the big screen.

Toward the end of her set, Lovato did a few solo numbers on piano.

Before playing "Warrior," she talked openly with the audience about her struggles with addiction. She said sobriety is something that people can achieve, even if they don't believe they can. It was a heartfelt and empathetic moment. And it was yet another moment where Lovato completely outshone DJ Khaled.

Lovato brought out a chaise for "Daddy Issues."
Leavitt Wells
Not only could she do pull off half a dozen costume changes, dance, sing her ass off, play the piano, and run around the arena like she was on a treasure hunt, Lovato could also deliver inspirational talks that were meaningful and moving. She talked in heartbreaking specifics, while Khaled had nothing but generic "bless-ups" to offer.

Bringing a guest choir onstage for her last two songs, Lovato closed the show with "Sorry Not Sorry" and "Tell Me You Love Me." Confetti rained down from the ceiling as she closed out the night to rapturous applause. DJ Khaled may talk about having the keys to success, but Demi Lovato was the one who opened that door tonight.

The Crowd: Ladies, ladies, and more ladies. The demo definitely skewed toward the fairer sex tonight. They were also on the younger side of 30. It isn't hard to imagine that a good chunk of the packed house grew up watching Demi in Camp Rock. There were also some roving packs of DJ Khaled acolytes and pick-up artists. They were easy to spot, due to their slicked back hair and the fact they put on so much cologne that you basically had to swim through it if you walked downwind of them.

Overheard: DJ Khaled: "They don't want me to keep going. So I'mma keep going." Who is this "they" that Khaled keeps talking about? The NRA? The Illumanti? Bohemian Grove? Blavatsky's Secret Chiefs? How deep down the rabbit hole is this guy? What does he know?

Random Notebook Dump: Whoever came up with the idea of placing Mobile Mini ads with the slogan "Size Doesn't Matter" at face level above the urinals in the men's room is a marketing Super Saiyan.