Arizona State Fair attendees love the annual concert series. Jim Louvau
The fall festival season isn’t all about enjoying the cool weather while you ogle gourds and down spicy, soul-warming drinks. Well, okay, maybe it is, but music festivals are another fantastic way to kiss summer goodbye and look ahead to what the rest of the year may bring.

From old-school hip-hop and traditional Mariachi to punk rock and metal, here’s the scoop on 13 music festivals to make your fall season spectacular in metro Phoenix.

Arizona State Fair
When: Wednesdays through Sundays, October 6 through 29
Where: Arizona State Fairgrounds
Some come for the fried food served in massive-size portions, others for the thrill rides. For many, though, it’s all about what happens on the concert stage. Every year, the Arizona State Fair offers a mix of performers repping styles from country to metal. This year’s lineup includes Cake, who infuse their rock with a variety of styles, like funk, hip-hop, and world music. There’s rapper Snoop Dogg, classic rockers 38 Special, industrial-dance act Marilyn Manson, and the annual Old School Jam that features classic hip-hop and R&B acts.

Tour De Fat attendees come to party.
Alexandra Gaspar
Tour De Fat
When: Saturday, October 7, from 4 to 9 p.m.
Where: Tempe Beach Park
You can wear festive costumes and ride bikes any time you want, but this annual event provides the chance to do that with a whole lot of other people. And there’s beer. Not only does beer company New Belgium’s festival have a variety of brews to try, it boasts a pretty active concert stage. Local acts like Fairy Bones, Phoenix Afrobeat Orchestra, and Sunset Voodoo play throughout the event. Headliners Michael Franti & Spearhead take the stage at 7:45 p.m.

HAIM are one of Lost Lake Festival's headliners.
Chuff Media
Lost Lake Festival
When: Saturday, October 7, from 4 to 9 p.m.
Where: Steele Indian School Park
The folks behind popular music festivals like Bonnaroo and Outside Lands are bringing their skills to Phoenix, debuting the Lost Lake Festival. The three-day affair is packed full of heavy hitters like The Pixies, Chance the Rapper, Run the Jewels, The Roots, The Killers, Huey Lewis and the News, and Odesza. Some local acts, including Playboy Manbaby and Fayuca are included on this jam-packed roster. There will also be food, drinks, art, and interactive games to keep you fed and entertained between sets.

Arizona Old School Block Party Festival
When: Saturday, October 7, at 4:30 p.m.
Where: Rawhide Event Center in Chandler
Take a trek to Chandler for a trip back in time at this concert that features old-school hip-hop artists Biz Markie, Sir Mix-A-Lot, and Tha Dogg Pound. This all-ages concert has bars set up for folks 21 and older looking for some adult beverages to enjoy with their classic jams. The packed-with-acts shindig also includes Digital Underground, Newcleus, 2 Live Crew, and Mary Jane Girls. 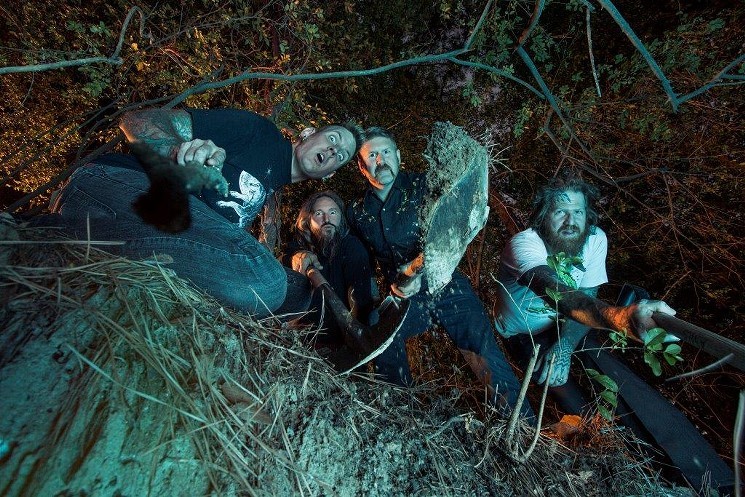 Metal band Mastadon adds the fright factor of Halloween season at a 98 KUPD event.
Travis Shinn
98 KUPD’s Big Red Night of the Dead
When: Friday, October 20, at 4 p.m.
Where: Fear Farm Festival Grounds
KUPD’s annual music festival aims to be as scary as the haunted house grounds where the event is located. This year, it’s a very metal affair with headliners Mastodon, and supporting acts In This Moment, Of Mice & Men, Avatar, and DED. All ages are welcome to headbang at this concert. VIP tickets include complimentary food and beverages and special access to the front of the stage for a chance for the ultimate ear-shattering experience. 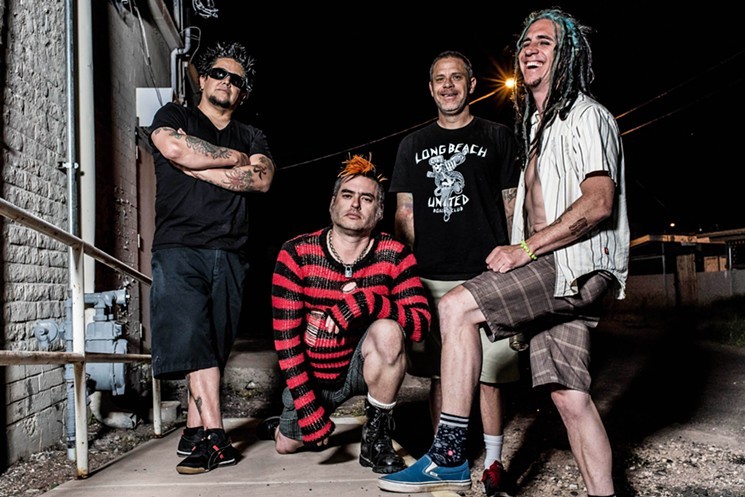 NOFX is going to get Punk in Drublic.
Ben Garcia
Punk in Drublic Craft Beer and Music Festival
When: Saturday, October 21, at 4 p.m.
Where: Fear Farm Festival Grounds
Hosted by Fat Mike of NOFX, this festival is an opportunity to try a selection of over 100 craft beers while getting your fix of punk’s poppier side with bands like NOFX, Bad Religion, Goldfinger, Guttermouth, and Authority Zero.

Arizona Bluegrass Film Festival
When: Saturday, October 21, at 5 p.m.
Where: Gilbert Historical Museum
This event focuses on a screening of Bluegrass, Banjos, and Squirrel Barkers, a film by Rick Bowman about San Diego’s rich bluegrass history. The film covers the bluegrass roots in that region, the performers hailing from the area, and talks about Deering Banjos, the world’s largest banjo manufacturer. Deering started in San Diego in 1974. A Q&A with Bowman follows the screening.

Jane N' The Jungle are coming to Apache Lake Music Fest.
Jim Louvau
Apache Lake Music Festival
When: Friday, October 27, at noon
Where: Apache Lake Resort and Marina, Apache Lake
This year marks this music festival’s eighth annual showcase of bands from the Arizona music scene. A variety of styles, from rock to funk to indie sound,s are represented. Attend daily or camp out for the entirety. However you choose to attend, this scenic spot ensures that you’ll get to soak up nature’s beauty as you get entertained by bands like 2 Tone Lizard Kings, Banana Gun, Dry River Yacht Club, Japhy’s Descent, and Phoenix Afrobeat Orchestra.

Mega 104.3 Fall Funk Fest
When: Friday, November 3, at 8:30 p.m.
Where: Celebrity Theatre
This one-night event celebrates the fall season by dosing it with some funk. Three long-running acts, Ohio Players, Zapp Band, and Rose Royce, have been funking it up for decades and will provide the sounds to make it a groove-filled evening.

Randy Jackson speaks at Mesa Music Festival.
Michael Becker/FOX
Mesa Music Festival
When: Thursday, November 9 through Saturday, November 11; hours vary
Where: Downtown Mesa
Mesa is celebrating fall with a music festival that brings together more than 200 acts from around the world to entertain guests over a three-day period. Arizona music is well-represented in the mix, including bands like Smiling Faces, Syde Project, Bloody Rogue Bastards, and Weslynn. The rest of the large lineup is a mix of more regional acts, and some traveling from different states, like Nate Mays from Ohio, or Trynket from California. International acts making a desert appearance include Monja Hammond from Spain and The Stanleys from Australia.

Tempe Art-A-Gogh-Gogh Six Year Anniversary Party
When: Friday, November 24, at 7 p.m.
Where: Yucca Tap Room, Double Nickels Collective, FiftyOne West, Sky High Smoke Shop, Rocket A Go-Go, in Tempe
This live music and live art event is having a birthday bash at the Yucca Tap Room — and the surrounding retail shops and music venues that comprise the entire plaza. Bop around and see bands like The Sugar Thieves, The Shivereens, The Linecutters, and Kill Your TV. DJ’s include Dapper Dan and ME2. J.J. Horner, Sierra Joy, and Tyson Powless are a few of the artists who will be on hand, making work before your eyes. Vendors with items ranging from handmade artsy goods to records and tapes will give you plenty of ways to spend your dollars.