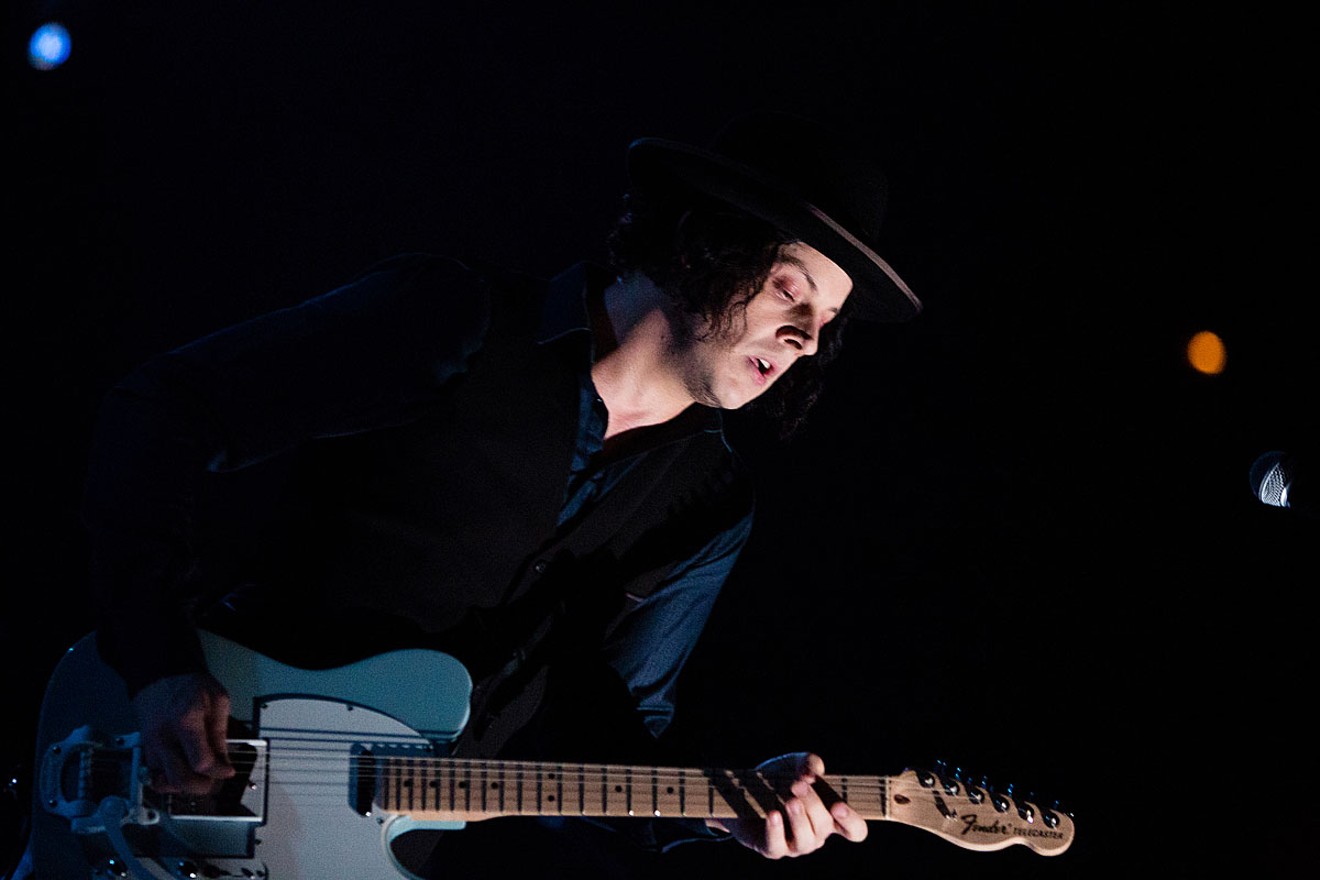 Let's start with Jack White, shall we? Mat Hayward / Shutterstock.com

Joe Satriani
Why he's a rock god: Because he imparted his fast arpeggios technique to such renowned shredders as Steve Vai and Metallica's Kirk Hammett. The fact that he's from Long Island, the fact that he's bald like The Silver Surfer, and the fact that he has a song called "Surfing With the Alien" all combine to make him more superhuman.

Why he gets a bad rap: Because he plays only instrumentals, his songs are harder to identify by a mainstream audience. The most Satriani that people have heard is his 2005 song "If I Could Fly," which he sued Coldplay for copying for "Viva La Vida" in 2008. The case was dismissed with both parties agreeing to an out-of-court settlement. The fact that he didn't beat them chips away at his god-like status, in a "Fool, you let Chris Martin beat you" sort of way. Would Silver Surfer settle out of court with Submariner?

Eric Clapton
Why he's a guitar god: Because there was graffiti all around London saying as much. You don't get much more overrated than being called God. No one can doubt that he is a very able rock god, although one would have to admit that ever since 461 Ocean Boulevard, his own records reflect a desire to be better known as a singer than a shredder.

Why he gets a bad rap: If "Clapton is God," then why did he make himself in Albert King's image? Two of his best-known songs are direct lifts. "Strange Brew" recreates King's solo for "Oh Pretty Woman" note for note, while the "Layla" riff, when played slow, recalls King's "As the Years Go Passing By." And most of the best licks Duane Allman played. The real reason Clapton gets criticized is because in 1976 he declared support for former conservative and anti-immigration advocate Enoch Powell from a Birmingham stage, making repulsive racist comments. Just kidding, he really just said a bunch of horrible things. Although Clapton tried to pass it off as a drunken joke later, he never apologized and for we now have the Rock Against Racism movement.

Esteban
Why he's a guitar god: To housewives or anyone who has spent hours plunked down in front of the Home Shopping Network or QVC, he's synonymous with Andrés Segovia, one of the greatest guitarists of all time. And the fact that he plays a Spanish guitar and wears a Zorro hat means it must be true!

Why he gets a bad rap: Ask anyone who's bought one of the cheap balsa wood guitars he endorses that splinter when you look at them. And in his 2000 New Times profile, Gil Garcia exposes the fact that Segovia's alleged endorsement of Esteban amounts to nothing more than the classical guitar legend autographing a copy of his autobiography.

Kurt Cobain:
Why he's a guitar god: Nirvana is the last iconic rock band, so it stands to reason that Kurt would be catapulted to guitar god status after his death.

Why he gets a bad rap: Musos will tell you that he couldn't play anything near guitar god status. He would be the first to tell you that he was no great guitarist. But he was a breath of fresh air coming after the hair farmer and reintroduced white noise and fuzz into mainstream rock. If anything, he did everything he could to be an anti-guitar god. And as scientists will tell you, you can't be anti-matter and still be matter. Or maybe you can. We dunno. Do you need the number of a scientist?

Ted Nugent
Why he's a guitar let's just skip to reason he gets a bad rap.

Why he gets a bad rap: Uncle Ted's politics have overshadowed any warm and fuzzy memories you have of The Amboy Dukes and "Cat Scratch Fever." The GOPs cling to him the same way people hang around the schoolyard bully: They admire him for his badass persona and the fact that he could kill a squirrel at close range and make it seem patriotic. We have always had this vague memory of him de-tuning the strings of his Gibson Birdland in concert so he was able to shot flaming arrows from it while playing. Nope. He just shoots the flaming arrow INTO a guitar. Shouldn't that be possible, though? (See Billy Gibbons: We have the technology.)

previous
KEEP PHOENIX NEW TIMES FREE... Since we started Phoenix New Times, it has been defined as the free, independent voice of Phoenix, and we'd like to keep it that way. With local media under siege, it's more important than ever for us to rally support behind funding our local journalism. You can help by participating in our "I Support" program, allowing us to keep offering readers access to our incisive coverage of local news, food and culture with no paywalls.
Make a one-time donation today for as little as $1.
Serene Dominic
Contact: Serene Dominic