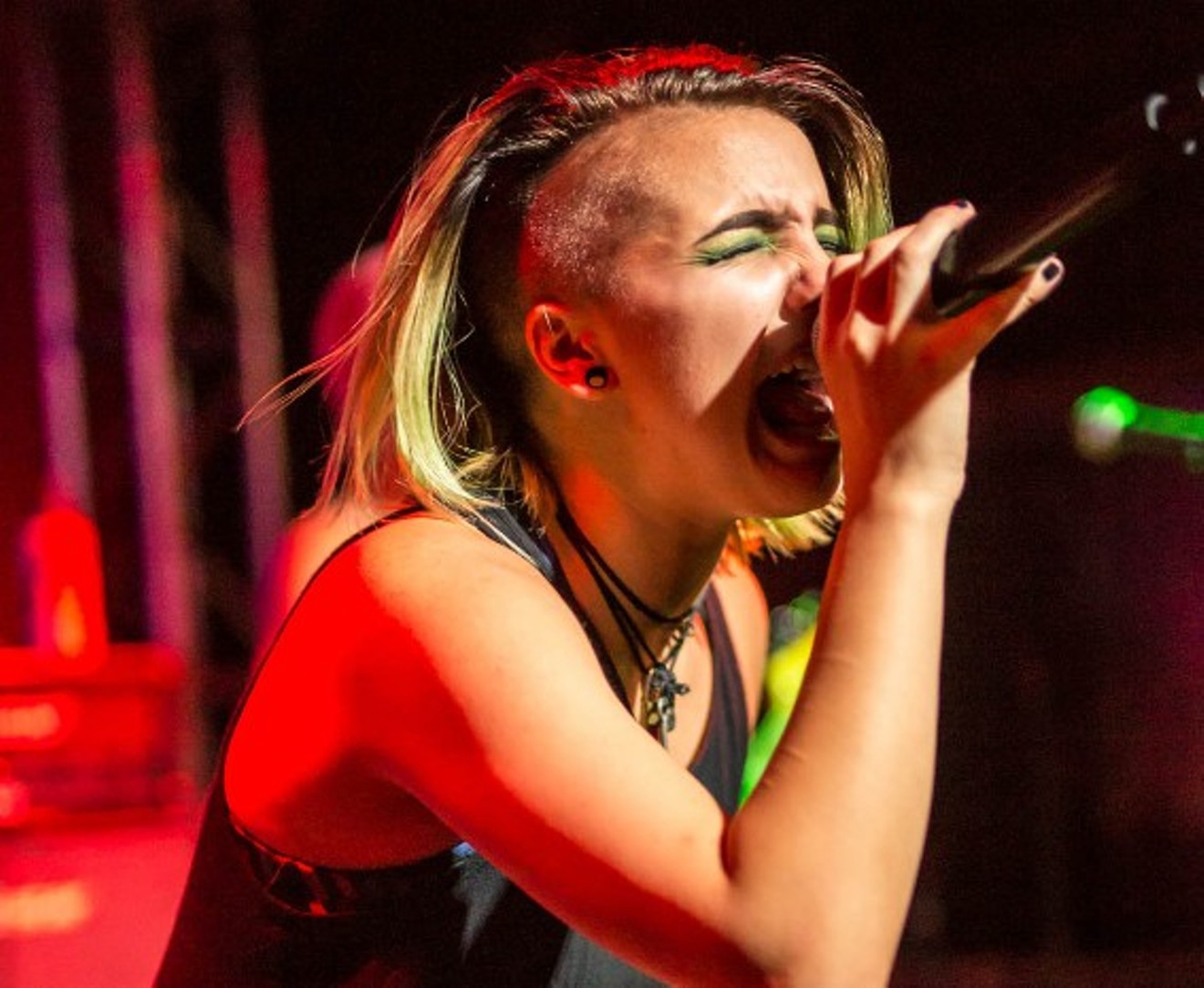 As a band member, every musician has a strong responsibility to uphold. Whether it's a plucked string, well-timed hi-hat, or tap on the keys, each musical element has to come together perfectly. And while no instrument is necessarily more important than the next, it’s no secret that that many music fans end up loving or hating a song based on the vocals.

Typically the face of the band, a main vocalist not only has to appeal to the listener by way of sound, but they tend to have a hand in songwriting, developing a band’s stage presence, and interacting with the crowd.

It can be a difficult juggle all that — and to do it well. So we wanted to put the spotlight on the best hard rock vocalists in the Valley of the Sun, using as criteria current band activity, vocal range, personal style, and, of course, some crossover into heavy metal. Here's who made the cut.

Sydney Dolezal of Doll Skin.
Jack Lue
Sydney Dolezal of Doll Skin
Doll Skin frontwoman Sydney Dolezal originally wanted to be a pop singer, but apparently the hard rock gods weren't having it. Developing a penchant for performing at a young age, Dolezal found herself meeting other like-minded artists at the Phoenix School of Rock in 2013, and Doll Skin was born. The four-piece blends punk, hard rock, and pop (think Rancid meets The Runaways) and quickly got the attention of Megadeth’s Dave Ellefson. Ellefson produced the band's debut release in 2016, and it landed on AP Magazine’s 2016 list of “7 of the Best Rising Bands Under 21.” Dolezal is the youngest member of Doll Skin, but you wouldn’t know it from her vocals, which call up Caleb Shomo (Beartooth), Vic Fuentes (Pierce the Veil), and Lzzy Hale (Halestorm). In 2017, Doll Skin dropped their sophomore LP and performed on the Vans Warped Tour. And Dolezal says she’s planning to develop a heavier style.

Chris Powers of Razer.
Alien Photo/Razer
Chris Powers of Razer
Razer are no stranger to national attention. The band’s 2015, self-titled debut received accolades by Classic Rock magazine (three songs were rated as Tracks of the Week) and reviewers who were blown away by Chris Powers’ vocal prowess. He considers himself an R&B vocalist who sings hard rock. He studied flamenco guitar and music theory at the American School of Music in Manhattan. And his resume's pretty impressive. Powers sang on "The Devil Went Down to Georgia" (downloaded over 10 million times) on the Guitar Hero III: Legends of Rock video game, and he always seems to be working on new music or with his classic rock cover band. Guided and co-produced by Alan Niven, whose credits include kickstarting Motley Crue, Great White, and Guns N’ Roses, Razer is poised to do big things with Powers at the helm. 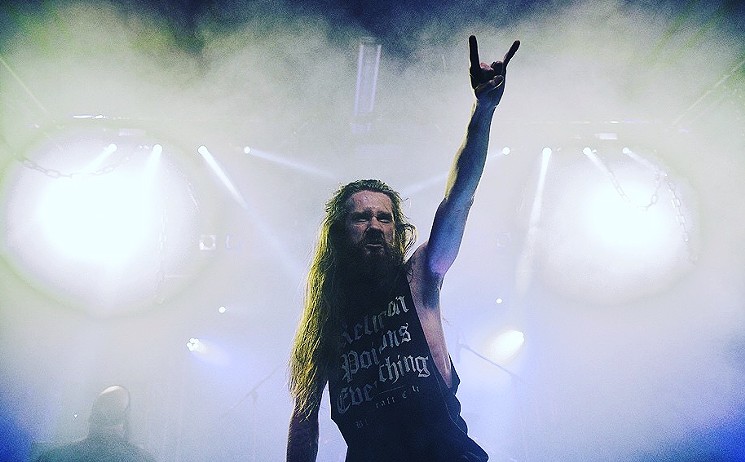 Richie Cavalera of Incite.
Szeymour Photography
Richie Cavalera of Incite
Groove metal trio Incite have undergone a few lineup overhauls since coming together in 2004, but there’s always been one staple: Richie Cavalera. Name sound familiar? His dad, Max Cavalera, has been a staple in the local metal scene for years, with bands like Sepultura, Nailbomb, Soufly, and Cavalera Conspiracy. Incite are working on their fifth full-length, due out next year. And the band are best known for tightly implemented, straight-to-the-jugular music. Richie’s throaty screams roil and claw against doublebass and heavy (yet catchy) guitar riffs. While the majority of the vocals are guttural-based screams, the overall sonic experience is that of a finely tuned metal band. Heading out on a large North American tour, Incite will finish 2017 on a European run and start recording a new album in 2018.

Cade Miller of Concertina
Listed among Phoenix New Times' “17 bands to watch in 2017,” desert groove trio Concertina have put that vision to work. The band finished writing their first full-length, and this month, they are heading into the studio to record. The band embraced being a trio after their guitarist left in 2016, and while frontman Cade Miller already had guitar/vocal duties, he’s picked up even more responsibilities instead of adding another guitarist to the roster. Miller pulls from influences like James Hetfield, Henry Rollins, and Ozzy Osbourne, creating a style of gravelly vocals with a ’90s inflection. It's high-velocity yet sludgy — Crobot meets Volbeat meets the Sword — with instrumentals tailored to heavy grooves, crunchy down-tuned riffs, undeniably tight guitar solos, and a healthy peppering of that NOLA sound. Time will only tell which path Miller will navigate: bluesy sludge metal, outlaw hard rock, or a different hybrid altogether.

Alexia Rodriguez of Eyes Set to Kill
Even though the band was founded in 2003, Eyes Set to Kill could be considered veterans of the Phoenix scene at this point. Gracing the cover of USA Today, landing on Alt Press’s coveted “100 Bands You Need to Know” list, and touring the globe multiple times, the band's back with a new lineup, a new single, and a new album coming in 2018. While sister Anissa Rodriguez has departed from the group, Alexia is still going strong. And her vocals on the upcoming album make a statement with a combination of metalcore meets nu-metal stylings. The new single “Break” immediately launches with Alexia’s raw melodic shouts, transpiring to clean, soaring vocals. Eyes Set to Kill have always been about sticking to it and never giving up. So 2018 promises to be a big year for the band.

Christian Lee of Sectas.
Kristel Regalado
Christian Lee of Sectas
Christian Lee picked up guitar around the age of 5, went on to mimic Dokken records, and later fell in love with the vocal styles from acts like Flotsam and Jetsam and Death Angel — all of which led to him becoming the guitarist/singer he is today. The trio Sectas are reminiscent of bands like Megadeth, Rush, and Led Zeppelin, a fusion of flamenco and progressive Spanish guitar with melodic vocals. In 2015, the band won the L.A. Music Awards’ Producer’s Choice Hard Rock Band of the Year. Lee’s style is all about balance: melodic vocals with rhythm guitar, bass, and drums, giving each instrument plenty of time to shine. He’s also adamant that he does not need to have a screaming vocal element in Sectas’ music in order to be categorized as hard rock or metal, contrary to the feedback Lee has said he’s received over the years.

Nate Butcher in As Thick As Thieves.
TAG Photography
Nate Butcher of As Thick As Thieves
As Thick As Thieves’ frontman Nate Butcher started his music career in Phoenix by DJing as part of the rave scene, all about the hip-hop and electro. He went on to front a 311-esque band (among a handful of others), and later recorded a solo song that a producer played for the band As Thick As Thieves. Butcher’s vocals are thick and throaty, yet versatile. For example, he can flawlessly pull off a cover of Motorhead’s “Ace of Spades” then immediately launch into an original As Thick As Thieves’ track, packed with drawn-out bridges and raw verses. The band members asked him to come on board, and they’ve since released an EP. They're currently working on new music, and have opened for bands like Dope and P.O.D. 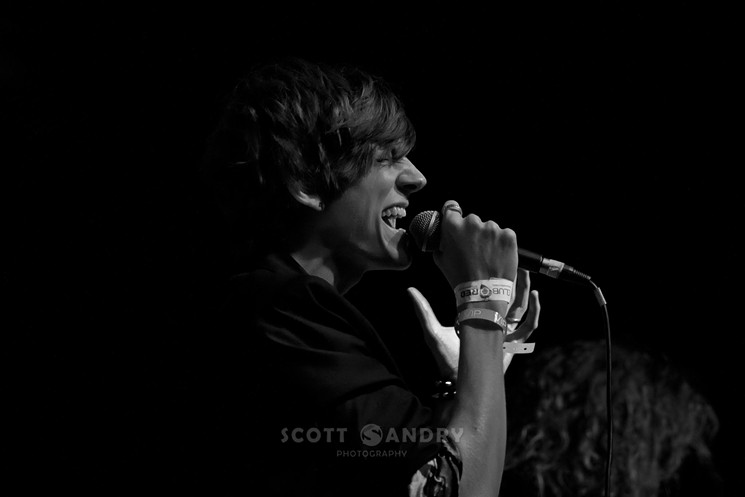 Leon Lindon of Phoenix & Dragon.
Scott Sandry
Leon Lindon of Phoenix & Dragon
Leon Lindon’s singing career began at a young age and was rooted in classical compositions. He went on to form an avant-garde theatrical rock group, and after that group released an EP and disbanded, he found his true passion in heavy metal. Taking a cue from his classical background, Lindon began studying the vocal styles of legends like Bruce Dickinson and Ronnie James Dio. Although the vocalist didn’t join Phoenix & Dragon until the start of 2016 (and recorded his first track with the band toward the end of that year), it was an ideal fit. The band were already known on the Phoenix scene for high-energy shows and intricate musical execution. Lindon brought a fresh vocal style to the act. Currently, the band is working on its debut full-length album, set for release in 2018.

Jason Payne of Sanitation Squad.
Michael Wesala
Jason Payne of Sanitation Squad
Formed after an Iron Maiden show in 2008, Sanitation Squad are desert hard rock at its best. Currently working on their second full-length release, the band's known for apocalyptic themes and lyrics centering on paranoia, disasters, and the chains that bind us all. Other band members provide backup vocals, and Payne’s lead vocal style is reminiscent of Bruce Dickinson, early Dave Mustaine, and Rob Halford. It’s an ideal mix of punk, rock 'n' roll, and youthful thrash metal.

Joe Cotela of DED.
Joe Orlando
Joe Cotela of DED
DED's Joe Cotela has a history of working in bands that gain traction quickly. The origins of DED trace back to the band The Cover Up, which led to Man Made Machine. While that band was gaining national attention, Cotela and the drummer decided to form DED along with two other musicians (formerly of Greeley Estates). Cotela’s vocal style offers a powerful, consistent layer over hard-driving instrumentals. His lyrics explore dark lyrical content about the human condition and horror imagery, and Cotela jumps from guttural screams to melodic wails. The band's first radio single, “Anti-Everything,” premiered on Sirius XM Octane, and the band embarked on a tour with Korn and Animals as Leaders in May 2017. 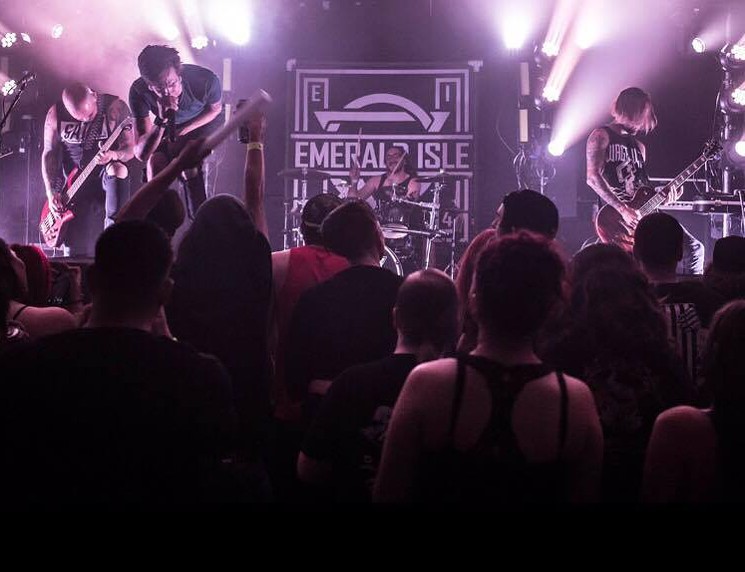 Dylan Neuman of Emerald Isle.
Emerald Isle
Dylan Neuman of Emerald Isle
Emerald Isle is a bit of a diamond in the rough. They won the 2013 Arizona Ernie Ball Battle of the Bands, and since then, the band's progress has been slow but sure. The band incorporates the classic energy of heavy metal, the unpredictable electronic style of nu-metal, and a mix of raucous growls, screams, and soaring melodic vocals — courtesy of lead vocalist Dylan Neuman. While other members provide some backup vocals, Neuman's known for his ability to alternate between clean and heavy vocals, and he has learned from some of the best. His father is one of Arizona metal’s most charismatic figures: Prophet of St. Madness. Emerald Isle appeared at Anaheim’s 2017 Winter NAMM Show, released a video from their second album, 2016’s Lost Empires, and are currently working on new music.