Kacey Musgraves is scheduled to perform on Wednesday, February 14, at The Van Buren. Kelly Christine Sutton
Valentine’s Day is this week, which means it's probably a wise idea to have something lined up to give to your significant other. If the usual offerings of flowers and candy seem a bit, well, boring, consider treating your sweetie to a show. After all, there are plenty of notable ones happening in the Valley during next several nights, including on Valentine’s Day itself.

If your main squeeze is into indie rock, for instance, you could attend gigs by Neko Case, Pedro the Lion, or Gregory Alan Isakov. If they’re country fans, old-school crooners the Oak Ridge Boys and new-school star (and newly minted Grammy winner) Kacey Musgraves will both be in concert this week, too.

Other options include performances by KISS, Chicago, Keller Williams, and The Bad Plus.

Details about all of these gigs can be found below in our list of the best shows happening in the Valley this weekend. And for even more live music happening around the Valley, hit up Phoenix New Times' online concert calendar.

Celebrated American jazz trio The Bad Plus know no limits when it comes to taking on a variety of sounds, styles, genres. Riffing on other people’s tunes is nothing new in jazz, but the breadth of musical interests that bassist Reid Anderson, pianist Ethan Iverson, drummer Dave King bring to their collaboration makes the group stand out. For instance, there’s Made Possible, from 2012, the band’s first foray into electronic music. Then The Rite of Spring, from 2014, an ambitious interpretation of Igor Stravinsky’s 1913 orchestral work. That same year, The Bad Plus released Inevitable Western, a full-length album of original jazz compositions. And in 2015, the group unveiled a collaboration with master saxophonist Joshua Redman.

Which brings us to It’s Hard, 2016's collection of covers — or as King calls them, “deconstructions” of other people’s music. Before that, he says, “We hadn’t arranged a pop song for the three of us in 10 years.”

The Bad Plus first showed up on the national radar in the early 2000s, thanks to their off-kilter takes on songs by giants like ABBA, Black Sabbath, Nirvana, Blondie, Aphex Twin. Those covers earned the admiration of progressives who were pleased that the group were playing songs that looked toward the future rather than into the depths of the musicians’ navels; the covers also riled up a few jazz traditionalists, who viewed them as heretical.

In the ensuing years, the band laid low by playing more traditional songs and original compositions. But with It’s Hard, says King, “We were like, ‘Let’s weigh in again now that it’s far less controversial than when we first did it.’” Ben Salmon

On first listen, with the banjo fills and fiddle and rare, low-mixed gasps of drums, it would be easy to dismiss Gregory Alan Isakov's music as folk songs played through a Valencia Instagram filter. But Isakov's is the sort of mournful, pensive music suited for rainy days and worthy of repeated listening. Born in South Africa, Isakov moved to Pennsylvania and ended up in Colorado, where he established himself as a first-rate singer-songwriter. Part of his success comes from his tremendous stage presence. Quiet, often hunched slightly, Isakov approaches the microphone with his guitar and begins singing in his smoky baritone, somehow commanding the undivided attention of every person in the audience. Few singer-songwriters can own a crowd Isakov does, and it's part of his allure, alongside his strong songwriting, with its dense, tightly woven lyrics. David Accomazzo

"We've come too far to leave it all behind," crooned Chicago's former bassist Peter Cetera. Those lyrics, from the 1977 hit "If You Leave Me Now," are still relevant for a band that's sold more than 100 million albums in a career spanning more than 50 years.

Chicago is one of the first bands to incorporate brass as an essential element of sound, a signature style as definitive as the Roman numerals that mark almost all of the group's albums. They've successfully adapted to changing times, from underground beginnings and tours with Jimi Hendrix and Janis Joplin to their role as pop linchpins and stadium headliners. These tireless troubadours remain.

Despite the fact that it's been five years since their last album of all-new material, the predictably dubbed Chicago XXXVI, the band's trajectory has continued practically unimpeded. The loss of co-founder and guitarist Terry Kath to a self-inflicted gunshot wound in 1978 and the departure of Cetera in 1985 created momentary crises. But with four original members still in the fold and several newer recruits, Chicago remains as vibrant and invigorated as ever. Lee Zimmerman

Did you know that Pedro the Lion lead singer David Bazan is a Phoenix native? The indie rocker lived in the Valley for the first 13 years of his life, and as he elucidates in a recent interview with Phoenix New Times, he's got a lot of conflicted feelings about the place. He's put some of that into the latest Pedro record, Phoenix, the first in a series of five albums that marks the end of a lengthy hiatus for the project. Pedro will stage a homecoming show at Crescent Ballroom in February, bringing Tomberlin along for the ride. Douglas Markowitz

Legendary rock band KISS been around the world many times, but their current trip will be their last. They've announced their "final tour ever," which includes a date in Phoenix at Gila River Arena on February 13.

Famed for their extreme staging, pyrotechnics, heavy metal costuming, and the distinctive black and white face paint by each member, the quartet of Gene Simmons, Ace Frehley, Peter Criss, and Paul Stanley were one of the most infamous of a generation of American glam rock acts that included Alice Cooper and Cheap Trick. Their flamboyant looks and catchy songs like "Rock and Roll All Nite" and "Strutter" earned them massive popularity and influenced the hair metal bands that came after.

The current lineup of KISS features Tommy Thayer and Eric Singer replacing Frehley and Criss, who left the band years ago. Douglas Markowitz

The Oak Ridge Boys took their name from a Tennessee town best known for the Manhattan Project. What started as a gospel quartet evolved into a Grammy-winning sensation that rode the pop culture wave of southern accents that briefly dominated the terrestrial radio waves in the 1970s. But no matter how many goofy cracks can be made about The Oak Ridge Boys, ultimately they're a band that recorded with Johnny and counted The Eagles, Alabama and Charlie Daniels as peers. They've produced a catalog worth a listen, including such country classics as "Ozark Mountain Jubilee," "Come On In," "I Guess It Never Hurts To Hurt Sometimes," "Bobbie Sue," and (of course) "Elvira.” Expect to hear these songs performed when the Oak Ridge Boys visit the Higley Center for the Performing Arts in Gilbert this week. Becky Bartkowski

Kacey Musgraves’ reputation for delivering a classic country sound rife with progressive lyrics made her a star in the country scene and beyond. It's also made her phenomenally popular to boot. Her music has been lauded by publications such as Pitchfork, The Fader, and others that traditionally bypass country music altogether. Musgraves’ wide-ranging appeal has made her a regular at the CMT Awards, South By Southwest and Bonnaroo. And, unless you’ve been living under a rock, you’ve probably heard about how she had a stellar night at the Grammys this past weekend, winning four awards (including Album of the Year) and paying tribute to country legend Dolly Parton. So when Musgraves comes to The Van Buren this week, we’re expecting the mood of her show to be ecstatic and celebratory. (The show is officially sold out but tickets can be found on the secondary market.) Mikel Galicia

Neko Case knows how to twist and turn a phrase to make her lyrics sparkle and crackle, conjuring tender, fading memories and gossamer dreams in listeners’ minds. A sonic storyteller for more than 20 years as a member of Canadian indie rockers The New Pornographers, Case’s work with the Pornographers, with her band (Her Boyfriends) and as a solo artist has firmly established her as indie rock royalty. Released in June, Case’s self-produced Hell-On is her eighth studio album and seventh solo LP. In 2016, she teamed up with k.d. lang and Laura Veirs for case/lang/, which received rave reviews. Hell-On has been described by reviewers as one of her best and appeared on a handful of year-end 2018 best-album lists. Daniel Rodriguez

According to Harry Nilsson, one is the loneliest number. But for singer-songwriter/multi-instrumentalist Keller Williams, one is more than enough. Unlike one-man bands of old, Williams doesn't have cymbals on his knees, horns under his arms, taps on his toes, or a drum on his back. Rather, Williams has propelled the art of the solo performer into the modern age with the help of electronic effects. Williams' weapon of mass construction is the sequencer. Mastering what he calls "live phrase sampling," looping and delay effects allow Williams to harness a snippet of sound and, with the touch of a button, put that sound into a looped rotation. He then works around that sample, layering on more guitar, bass lines, keyboards, and drums, slowly building each song's foundation, all the while singing over the top. The result is a cacophony of sound that is far beyond what one man should normally be capable of creating – to the point that one naturally assumes there's a whole band backing him. Glenn BurnSilver 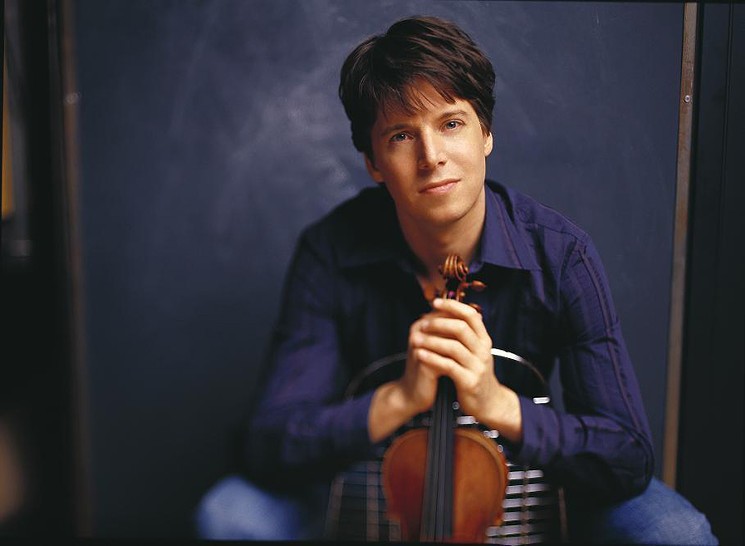 Never play Six Degrees with Joshua Bell. He's got us all beat. Not only has he performed with just about every contemporary classical artist there is out there he's also recorded with pop musicians such as Sting and Regina Spektor. Even if we go back a couple of centuries, Bell's got a direct link to the most talented musicians from the 1900s. Here's how: The Grammy Award-winning violinist studied for years with master teacher Josef Gingold (that's one degree). Gingold studied with Eugène Ysaÿe during the 1930s (that's two degrees). César Franck composed "Violin Sonata in A Major" for Ysaÿe's wedding in 1886 (that's three degrees – and three centuries). See if any more connections can be made through Bell's music when he shares the stage with pianist Sam Haywood at Mesa Arts Center on Thursday night. Olivia Flores Alvarez
KEEP PHOENIX NEW TIMES FREE... Since we started Phoenix New Times, it has been defined as the free, independent voice of Phoenix, and we'd like to keep it that way. With local media under siege, it's more important than ever for us to rally support behind funding our local journalism. You can help by participating in our "I Support" program, allowing us to keep offering readers access to our incisive coverage of local news, food and culture with no paywalls.
Make a one-time donation today for as little as $1.
Phoenix New Times Music Writers