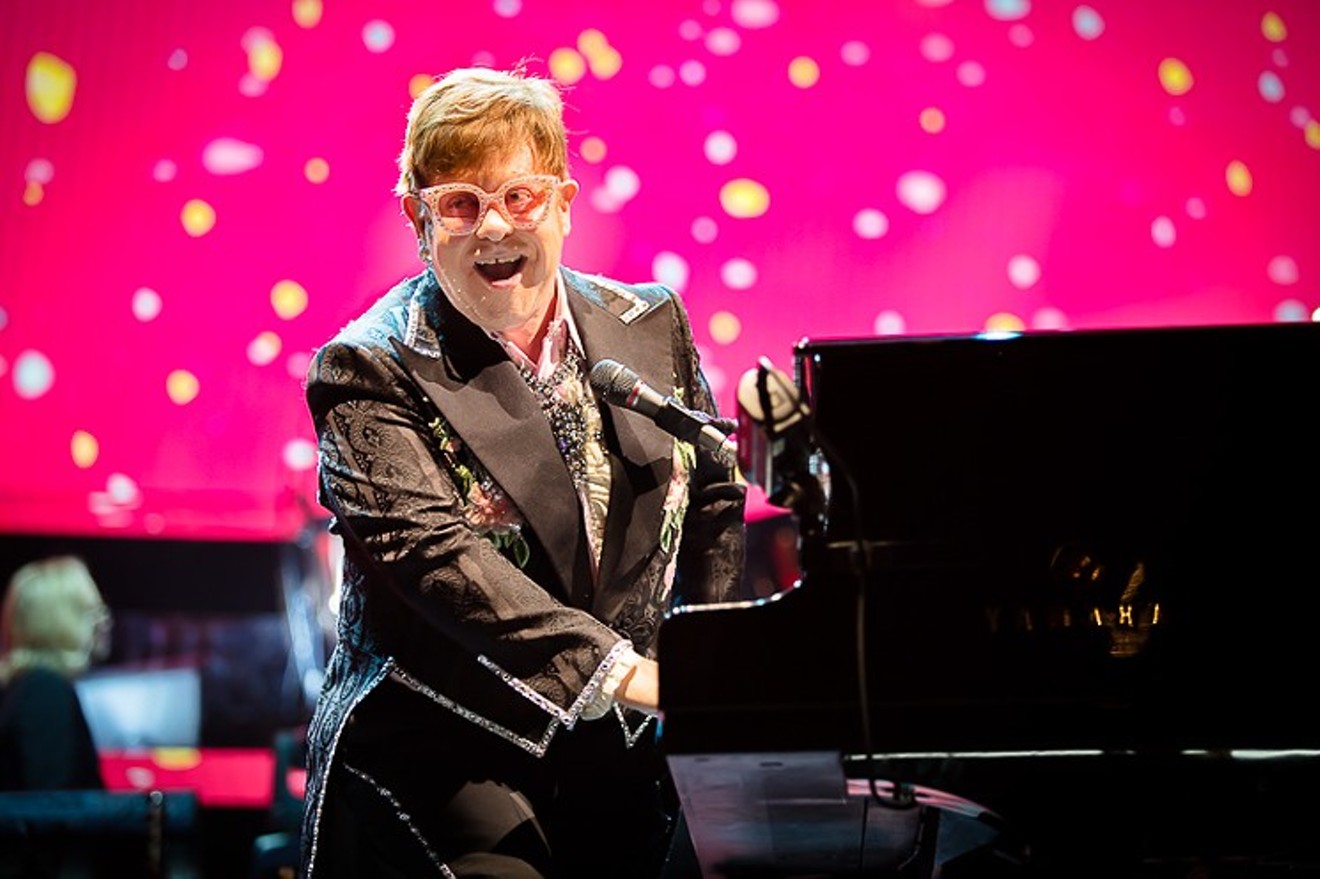 The Trunk Space is an institution in the DIY scene in Phoenix, but it hasn’t had the same opportunities since they left their home on Grand Avenue for a new space at the Grace Lutheran Church on Third Street. This year, they’re kicking off a new festival to celebrate all the vibrant musicians that make the Phoenix DIY scene so special. The first Trunk Space Festival will feature locals such as party starter Treasure Mammal and art rockers TOSO and Soft Deadlines. New York rockers Vamanos and California pop-punks Moonraker will stop by. Julian Hernandez

You probably don't have tickets to this show, but if we're making a list of the 10 best upcoming concerts, we can't mention Elton John's last show ever — his words — in the Phoenix area. The Farewell, Yellow Brick Road Tour is the legendary rock star's swan song, run for a musician with innumerable hits, from "Honky Cat" and "Benny and the Jets" to "Rocket Man" and "Candle in the Wind." When you've been in the game as long as John, you're bound to have a catalog with something for everyone. Douglas Markowitz

Heavy-metal guitarist Marty Friedman is now many years removed from the 1990s Megadeth albums that made him a household name among headbangers of the era. These days, Friedman mostly plies his trade in his adopted homeland of Japan. He has spent the last decade-plus ingratiating himself within the Japanese music scene as a go-to heavy hitter when J-pop groups like Momoiro Clover Z need a shredding guitar solo to spruce up a track.

His star still shines brightly on solo albums that blend the more eclectic pop influences of his Japanese surroundings with the guitar histrionics that helped propel Megadeth on classic albums such as 1990’s Rust in Peace. His most recent studio album, 2017’s Inferno, features guest appearances from Shiv Mehra of Deafheaven fame and Jinxx from Black Veil Brides. This weekend, Friedman will visit The Rebel Lounge for an evening of metal. Immortal Guardian and Warhead will open. Jason Roche

If there's one place that loves the blues more than Phoenix (and, okay, Chicago), it's Europe. Back when there was still a Yugoslavia, Belgrade native Ana Popovic became enchanted by the music, picking up the guitar in grammar school and playing festivals in Greece and Hungary by the time she finished college. While studying at The Conservatory in Utrecht, The Netherlands, Popovic and her band became fixtures on the Dutch and German club circuit, and eventually caught the attention of bluesmen such as Bernard Allison, who took her on tour and appeared on her 2001 debut Hush!.

Nominated for a W.C. Handy Blues Award for Best Newcomer in 2003 — the only European ever tapped for such an honor — Popovic has since been invited onstage by the late Solomon Burke and Buddy Guy. Her latest album, 2018's Like It on Top, features guest appearances by Keb' Mo', Kenny Wayne Shepherd, and Robben Ford. As they'd tell you themselves, Popovic is the real deal. Chris Gray

Renowned local rapper Raheem Jarbo’s geekdom knows no bounds — and it crosses over into his music. His lengthy discography as Mega Ran bears this out as he’s recorded various tracks, albums, and mixtapes inspired by all manner of nerdy subjects, particularly video games and professional wrestling, two of his biggest passions. Both pursuits will also influence his DJ set this weekend at Cobra Arcade Bar.

As you may have heard, the WWE’s Royal Rumble is taking place on Sunday, January 27, in downtown Phoenix. And after Jarbo and his fellow co-hosts of Mat Mania, their popular wrestling-oriented podcast, get done watching all the spandex-clad action, they’ll put on a Royal Rumble After-Party at Cobra.

Jarbo will get behind the mixers for a rare DJ set during the affair and plans to spin a mix of video game music, wrestling themes, and hip-hop. Meanwhile, the bar will serve geek-inspired cocktails and a WWE-themed cosplay contest for prizes will take place. There also may or may not be a few special guests dropping by the party. The mania begins at 10 p.m. Admission is free. Benjamin Leatherman