Mac Sabbath are scheduled to perform on Friday, July 26, at Marquee Theatre in Tempe. Jeremy Saffer
If you’re up for an interesting concert or nightlife experience over the next few nights, this weekend’s offerings won’t disappoint. You’ve got the chance to watch a McDonald’s-meets-Black Sabbath tribute band, party with Taylor Swift fanatics, or headbang with metal maniacs.

Comedy metal act Mac Sabbath will be in town on Friday to serve up their jokey blend of costumes and music at the Marquee Theatre in Tempe. They’ll share a bill with the Valley’s Ned Flanders-themed metalcore band Okilly Dokilly and the weirdos of Playboy Manbaby. Meanwhile, A Claire Slattery will be spinning up Tay Tay’s biggest hits at The Van Buren that same night.

Other highlights of this weekend’s concert calendar include a free show from Circa Survive, a DJ session by Exos, a gig by hip-hop star YBN Cordae, and this year’s Disrupt Festival rolling through town.

It's not too often that a band from Hawaii make a national impression as big as Inna Vision have over the past decade or so. The state's geographical isolation makes touring and promotion all the more difficult. However, this hasn't stopped the reggae maestros from striking gold. On their perpetual quest to spread positive aloha vibes to the mainland, the group have played in over 100 cities, recorded four full-length albums and five EPs, and has consistently cracked the iTunes Top 10 charts. They're back out on the road in support of their latest release, Link Up, a collection of reggae, dancehall, and hip-hop that should leave those in attendance at Inna Vision's Friday night show at Last Exit bopping along with joy. The show starts at 9 p.m. Tickets are $12 to $15. Jeff Strowe

Friday, July 26
One One Bar in Tempe

Iceland has exported more than its fair share of great musicians over the years, including such immense talents as Sigur Ros, Of Monsters and Men, and Ólafur Arnalds. Legendary DJ/producer Exos also deserves inclusion on that list, since he’s been creating innovative techno artistry for decades. For those who aren’t familiar with his lengthy career, Exos has been in the mix since the mid-’90s when he got into the beat business in his home country in his teens, releasing his first EP on Thule Records at the age of 17.

Over the course of 20 vinyl releases, three albums, and numerous singles and releases, Exos specializes in crafting a deep, minimal, and almost elemental style of techno filled with eccentric thrums and beats. Or, as one fan on YouTube described, it’s something you’d want to listen to “in a cave on an alien planet.” Thankfully, you’ll only have to journey to Tempe to hear an Exos set (instead of across the cosmos) as he’s scheduled to perform on Friday night at Mill Avenue nightclub One One Bar. Local DJs Aztech, D-fault, and JT4 will open the evening, which starts at 9 p.m. Tickets are $10 online in advance or $15 at the door. Benjamin Leatherman 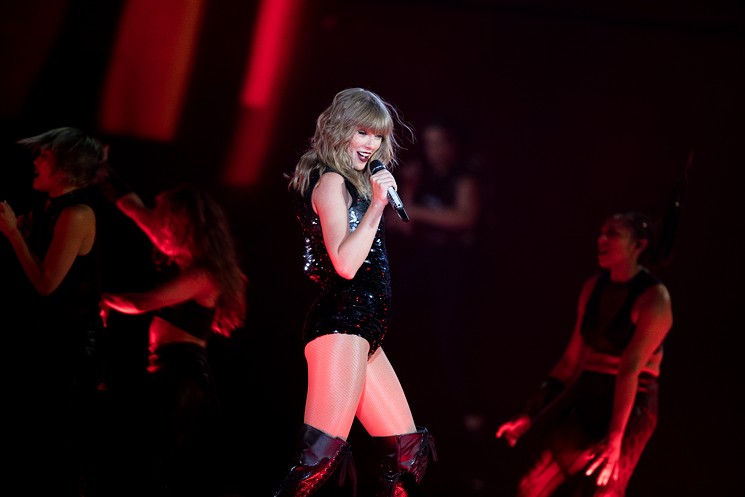 Show your love for T Swizzle on Friday night at The Van Buren.
Jim Louvau

You may have heard that T Swizzle’s new album, Lover, isn’t coming out until August. If the anticipation is killing you, dance it all away at Taylor Swift Night on Friday at The Van Buren. DJ A Claire Slattery will be spinning everything from “You Belong With Me” to the anthemic “We Are Never Getting Back Together.” To paraphrase the song “22,” this sounds like the perfect night to dress up like hipsters, make fun of your exes, and hit the dance floor. Shake it off starting at 10 p.m. Admission for this 18-and-over event is $8 to $12. Jason Keil

If nothing else, the Gipsy Kings hold the distinction of being the soundtrack to one of the great moments in comedic history. If you've never seen The Big Lebowski, you should stop what you're doing right now and change that. But those sane souls who have seen the Coen Brothers classic will remember the scene we're talking about. The immortal Jesus Quintana pulls up his purple socks, grabs a bowling ball, sensually teasing it with his reptilian tongue, then rolls a sultry strike — all in glorious slow motion. "Fuckin' Quintana," The Dude says. "That creep can roll, man."

The scene is perfect and hilarious in every way, but the glue holding the whole thing together is the Gipsy Kings' flamenco rendition of "Hotel California." Formed in the south of France in 1978, Gipsy Kings come from a Spanish Romani heritage. With 13 studio albums and a pair of live records to their name, the Gipsy Kings seek to use new technologies to distribute their old-world sounds. They’ll be in concert at 8 p.m. on Friday night at Wild Horse Pass in Chandler. Tickets are $57.50 to $107.50. David Rolland

Get a load of these clowns — and in this case, we mean that as a term of endearment. Led by none other than clown prince of metal Ronald Osbourne, this deep-fried take on Black Sabbath have been serving up artfully done parodies of the original heavy metal act since 2014. They'll be kicking off their latest tour in Tempe with the help of two equally goofy Phoenix-area favorites. First off, Head Ned and the rest of the gang from Okilly Dokilly, the Simpsons-themed metalcore band who recently made it onto the show itself, will add another parody band to the bill. Next up, the absolute weirdos in Playboy Manbaby will be the second group at the show to rep the Valley. This show, which starts at 6:30 p.m., is going to be a perfect storm of hardcore music, absurd antics, and local love. Tickets are $15 to $35. Douglas Markowitz

A member of the YBN (Young Boss N*ggaz) collective, Cordae Dunston, a native of Raleigh, North Carolina, has been pitched as a missing link between the dusty old school of rap and its colorful, youthful present. He’s had a quick rise since he began pursuing music in earnest last year, freestyling over songs like Eminem’s “My Name Is” and Kendrick Lamar’s “DUCKWORTH.,” responding to J. Cole’s “1985” on “Old Niggaz,” touring with Juice WRLD, and performing as part of YBN in Europe and at Rolling Loud in Miami. His show on Saturday night at The Pressroom starts at 7 p.m. Ambjaay will open. Tickets are $20 to $40. Douglas Markowitz

Circa Survive are doing a pop-up show surrounded by art by Esao Andrews, the artist for their surreal album covers.
Hayley Rippy

The band members of Circa Survive will be gaining a different perspective from their set this weekend at the Mesa Contemporary Arts Museum – meaning it's happening in the early afternoon in late July. Not that the aughts-famous, experimental rock band hasn’t performed a midday slot at a music festival, but a typical performance from Circa’s Phoenix stop usually happens at someplace like Marquee Theatre, at night.

Not so at Mesa Contemporary Arts Museum, which is hosting the special summer exhibition, "Petrichor," by Esao Andrews. Circa Survive fans know the work of this Japanese-American artist even if they don’t know him by name. Andrews has almost exclusively done all the surrealist album artwork for Circa Survive’s official releases, including Juturna and On Letting Go.

Therefore, Circa will be performing a stripped-down, pop-up performance to accompany Andrews for his mid-career retrospective exhibition – which is presented by Mesa Contemporary Arts Museum in collaboration with Thinkspace Gallery. The free performance does not require an RSVP, but space is limited. Circa Survive is set to perform at 1 p.m. Lauren Cusimano

Drab Majesty had achieved cult status by the time 2015’s Careless was released. The band consist of Deb DeMure, a trans darkwave musician looking equal parts Alien Sex Fiend and David Bowie, and keyboardist and vocalist Mona D (a.k.a. Alex Nicolaou). Since forming in 2011, the Los Angeles-based group are putting out music with cool atmospheres and sweeping, swirling melodies, conjuring the image of a near-future goth star in an intergalactic utopia.

There’s an urgency in many of Drab Majesty’s songs that, while brooding, isn’t truly gloomy. Their latest release, Modern Mirror, has been described by Paste as a “contemporary re-telling of Ovid’s “Narcissus,” the classic Greco-Roman myth about a man so obsessed with himself, he dies staring into his own reflection while the devastated nymph who can’t shake him out of her head watches from afar.” Such heady material isn’t anything new for Drab Majesty as their 2017 album, The Demonstration, explored how identities emerge from within the mind and as a result of social interactions. The duo will serve up such audio mind trips on Saturday at Crescent Ballroom at 8 p.m. Hide and Body of Light will open. Tickets are $15 in advance, $22 at the door. Tom Murphy

Stepping into a Warped Tour-shaped hole in the festival market, Rockstar Energy Drink's Disrupt Festival will bring a smorgasbord of popular metal, nu-metal, metalcore, and punk bands to Ak-Chin Pavilion on Saturday. The lineup is subject to change from city to city, but the Phoenix event, the penultimate chapter in the tour, will feature The Used, Thrice, Circa Survive, Sum 41, Sleeping With Sirens, Andy Black, Memphis May Fire, Meg & Dia, Juliet Simms, and Hyro the Hero. Gates open at 1:30 p.m. and tickets are $19.99 to $29.99. Douglas Markowitz

Austin is known for its guitar music. Few people think of the Texas capital as an EDM hot spot, but electronic geniuses Tritonal call it home. The DJ duo, which consist of Chad Cisneros and Dave Reed, first encountered each other in cyberspace, however. “We met through an online forum on a synthesizer we both owned, Access Virus TI," Cisneros says. "It was the first synthesizer that connected to hard drives and acted like an audio interface. It allowed us to arrange 16 tracks simultaneously." While Reed was in Washington, D.C., and Cisneros was in Texas, they sent each other clips of their music.

After a while, Reed decided to move to Texas and commit to their musical partnership. A decade later, the pair are in great demand, playing more than 100 shows per year, including this weekend at Maya Day & Nightclub in Scottsdale. They’ve also been quite prolific, releasing three studio albums (including 2019’s U & Me), nine EPs, and several dozen singles and remixes. On Sunday afternoon, you can catch Tritonal holding it down at Maya’s latest Soundwave pool party. Gates open at noon and admission is $10. David Rolland
KEEP PHOENIX NEW TIMES FREE... Since we started Phoenix New Times, it has been defined as the free, independent voice of Phoenix, and we'd like to keep it that way. With local media under siege, it's more important than ever for us to rally support behind funding our local journalism. You can help by participating in our "I Support" program, allowing us to keep offering readers access to our incisive coverage of local news, food and culture with no paywalls.
Make a one-time donation today for as little as $1.
Phoenix New Times Music Writers