Luckys Indoor Outdoor in the Roosevelt Row Arts District. Luckys
Live music went away for more than a year during the pandemic. If you're still trying to make up for lost time by seeing as many concerts as possible, consider hitting up some of our favorite metro Phoenix bars that offer shows by local artists most nights of the week. It’s about time the Roosevelt Row Arts District had a place to enjoy live music. Although Luckys Indoor and Outdoor has been open for less than a year, people come back again and again to chill, have a drink, and have a good time.

“Adding live music to the mix completes the whole experience, especially when people can come to support a local band that they follow or discover a new one,” says Nick Nitz, operating partner at Luckys’ Indoor Outdoor. “One of our goals when opening Luckys was to support the local arts scene and really engage with our community. We have been able to do so by providing musicians the space to perform in a fun venue.” Order a twist on the classic cocktail with the Lucky Negroni, which includes strawberry-infused gin, while kicking back and listening to Fayuca or The Hourglass Cats. Kevin Michael Prier of The Real Fakes (left) and Josh Kennedy of The Black Moods play an acoustic set at Boondocks in Tempe.
Jennifer Goldberg

There’s a reason why both locations of Boondocks are always hopping. The key to their success is the high-energy atmosphere combined with live music.

“Live music provides a connection to the guest. It’s art, it’s happening right in front of you in real time and you’re present for the experience,” says Boondocks’ owner, Jake Kory. “If the show is good, the guest responds with their energy which feeds the artist back, causing a snowball effect. ... If conditions are right, there’s nothing else like it.” Order the whiskey maple glazed spare ribs and pair with an adult slushy while listening to one of their favorite bands in rotation: DayWeather, Rose Colored Eyes, Wyves, Mr. Mal Band, Black Bottom Lighters, or People Who Could Fly. 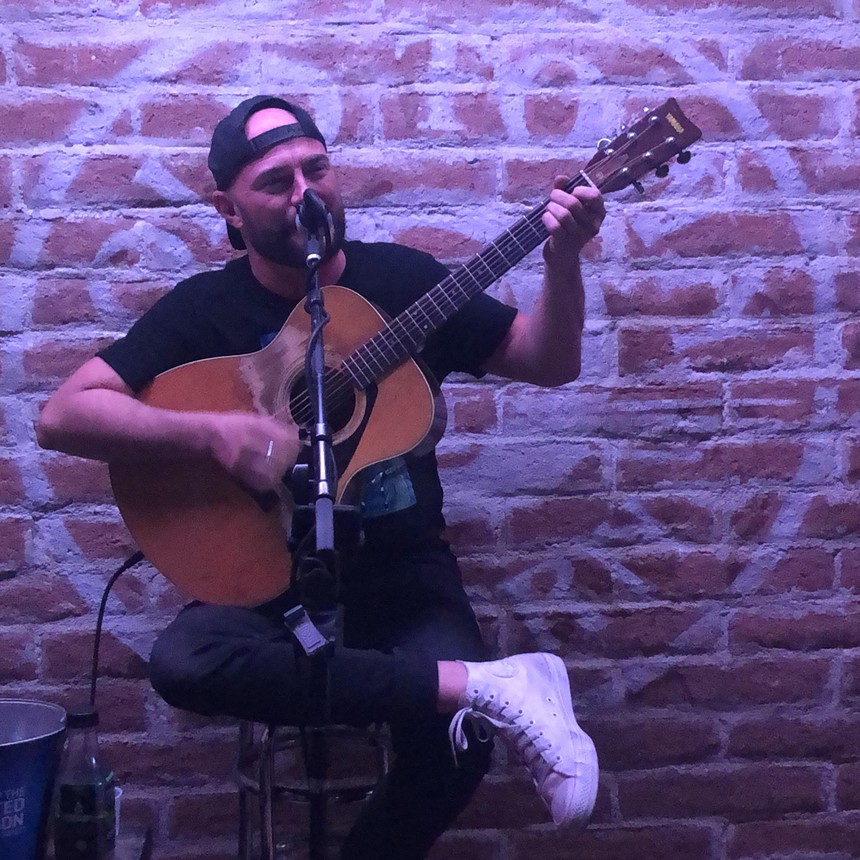 Old Town Tavern, tucked into a corner of Old Town Scottsdale, isn't easy to find. But once you know how to find it, you'll be back. The vibe is distinctly down-to-earth and friendly — the many regulars welcome the tourists with gusto. And no matter what night you show up, you'll catch great sets by local musicians like Daylon Greer of Elvis Before Noon, Corey Gloden of Wyves, and country-rock band Honeygirl. Order yourself a cheap drink, introduce yourself to the person on the next barstool, and enjoy. Yucca Tap Room, Tempe’s original live music venue, has been a staple of the music scene for over 40 years. The eclectic bar boasts the Electric Bat Arcade and its tropical drinks, plus it serves Asian-fusion cuisine like fried chicken baos and Blasted from Bangkok bulgogi fries.

Yucca’s goal is to be friendly and approachable all-around. “Most artists know they can talk face-to-face with the folks in charge of the show if they have any concerns or suggestions,” says Ben Talty, Yucca Tap Room’s music director. “We’re a place to hang out, not just see a show.” Past bands you could hang out with include Less Than Jake and Death South, and look forward to Guttermouth and Ignite in the upcoming year. Delicious food before a show at Copper Blues.
Mer Norwood

Located in the heart of downtown Phoenix, Copper Blues Rock Pub & Kitchen has been bringing good food and live music to listeners and diners for over 10 years.

“Live music is a 360-degree experience. The artists on our stage feed off of the energy from the room and vice versa. It’s something that dj’s and regular piped-in music can’t re-create,” says Ryan Handlesman, marketing and business development director for Copper Blues. Artists like Fitz and the Tantrums, Rock Lobster, The Pick Up Lines, and The Insta Classics and other musicians of all genres have graced the stage. Order the enormous nachos — they're built to share with a dozen ingredients and house-made beer cheese smothered on top.
KEEP PHOENIX NEW TIMES FREE... Since we started Phoenix New Times, it has been defined as the free, independent voice of Phoenix, and we'd like to keep it that way. With local media under siege, it's more important than ever for us to rally support behind funding our local journalism. You can help by participating in our "I Support" program, allowing us to keep offering readers access to our incisive coverage of local news, food and culture with no paywalls.
Make a one-time donation today for as little as $1.