The 13 Best Concerts in Phoenix This Week 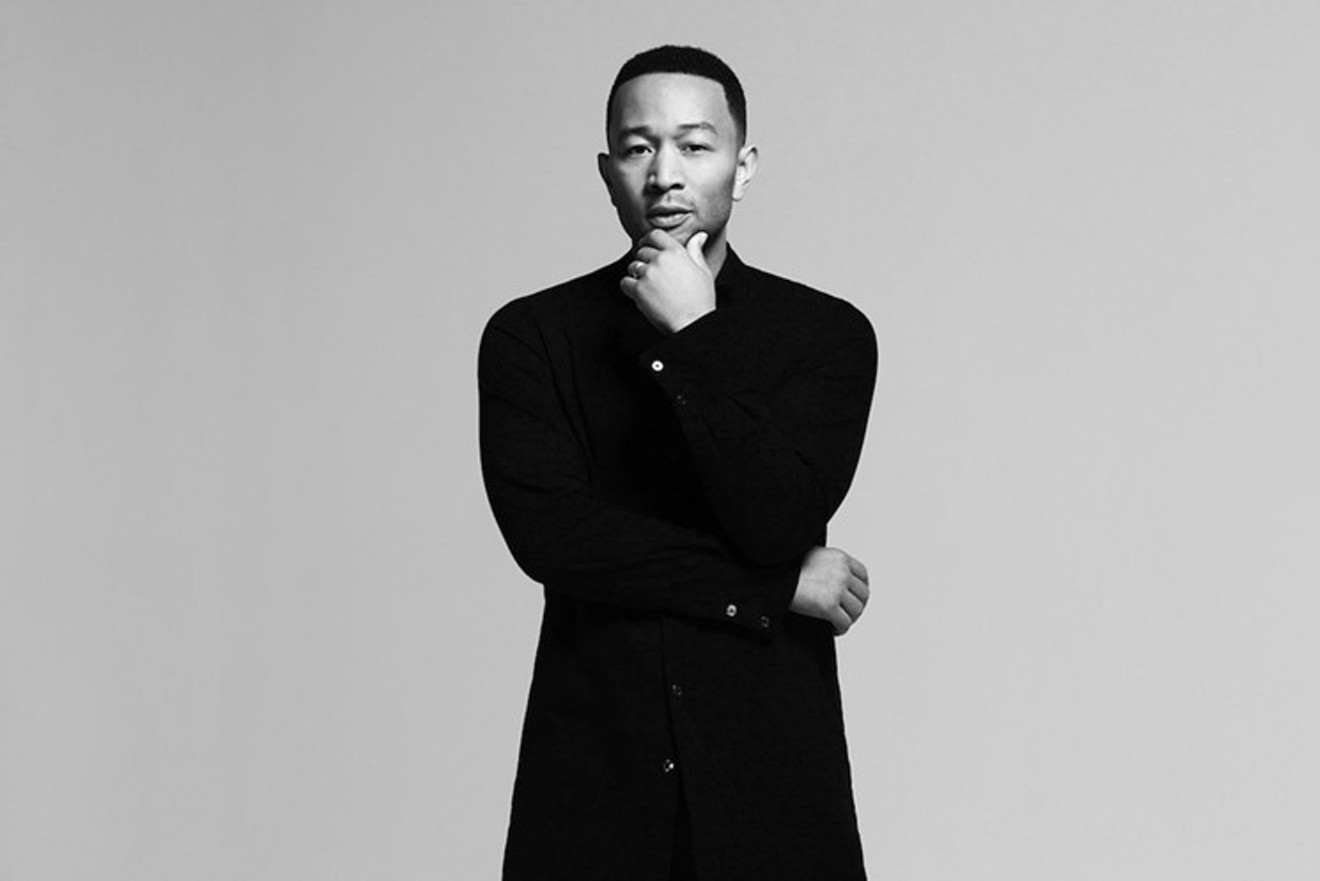 John Legend is scheduled to perform on Wednesday, May 24, at Comerica Theatre. Eliot Lee Hazel

Celtic Woman's current lineup.
Naomi Gaffey
Celtic Woman: Voice of Angels
Tuesday, May 23
Mesa Arts Center
It’s Ireland’s version of a boy band, but instead of aging out when their voices change, the Irish female vocalists in this revolving-door lineup must sing like an angel and play an instrument. “It’s really for anybody who enjoys Irish music. That’s something that we care about. We have a lot of followers who are Irish or that’s their heritage,” says Máiréad Carlin, part of the current quartet. She says Celtic Woman: Voices of Angels is also for anybody who loves bagpipe music, dancing, percussion, drumming, piano, and bouzouki: “We all play instruments onstage.” They’ll perform “Danny Boy” and “Amazing Grace,” plus traditional Irish music and even some new songs from their chart-topping Voices of Angels and Destiny albums. Susie Tommaney

R&B/pop hitmaker John Legend.
Eliot Lee Hazel
John Legend
Wednesday, May 24
Comerica Theatre
Six months removed from the release of his fifth studio album, Darkness and Light, John Legend will pay a visit to the Valley this week. Met with tepid sales figures despite critical acclaim, his latest sees the Ohio native adding dark undertones to his signature love ballads. Legend croons to his wife and infant daughter but also frets over political unrest and the future, which may have rattled longtime fans at first listen. Though love songs are still present, Darkness and Light marks an evolution of sorts for a singer-songwriter who seems to be expanding his reach beyond romance. Surely, however, Legend will perform plenty of older cuts as well; the versatile artist is capable of commanding a crowd both with a full band and by his lonesome, accompanied only by his piano. So no matter how Legend decides to arrange Wednesday’s performance at Comerica Theatre, it’s unlikely any fans will be disappointed. Matthew Keever

Shonen Knife make a long-awaited return to the Valley this week.
Courtesy of Reybee
Shonen Knife
Wednesday, May 24
Yucca Tap Room in Tempe
Unlike other dinosaur musicians rising from the grave to play a routine reunion tour or the now-ubiquitous live-album-in-full payday, Shonen Knife has never had to step into such territory. The Japanese power-punk trio has rolled on uninterrupted for close to four decades, a workhorse of an outfit spitting out more than a dozen records while touring the world with a smile. That smile is a crucial component of the Shonen Knife formula: The band’s 19th release, 2016’s Adventure, is full of bubblegum raucousness, with singer, guitarist, and founding member Naoko Yamano leading the band’s happy charge. Ever keeping up with its youthful contemporaries, the group sings about emojis and has made its full digital discography available on Bandcamp. For an outfit that began in 1981, toured with Nirvana and perfected the Carpenters’ “Top of the World” at the height of the ’90s celebration of the ’70s, Shonen Knife is a model for staying punk and staying relevant. Bree Davies

Lukas Graham will help kick off the summer with its pop and soul.
Danny Clinch
Mix 96.9's Summer Kick Off feat. Lukas Graham
Wednesday, May 24
Marquee Theatre in Tempe
When Lukas Graham released the single “7 Years” in the summer of 2015, the band expected that the song would hit big only among northern European audiences, where its main supporters are. But by fall, the song had gone viral and made the Danish group international pop stars. “Basically, we're a band that was broken through streaming,” says lead singer Lukas Forchhammer. The band that would eventually be known as Lukas Graham began when Forchhammer and his good friend Stefan Forrest wrote several songs together. Then Forchhammer spent some time traveling in South America and New York in 2009 and returned home determined to expand his and Forrest’s music. They recruited some high school friends, including Mark Falgren, with whom Forchhammer had been in a folk band. By 2011, the group had solidified its core sound, which is steeped in pop, funk and R&B. This week, Lukas Graham will co-headline Mix 96.’s Summer Kick Off at Marquee Theatre with country-pop act The Band Perry. Tom Murphy

Esham, better known as the creator of the "wicked shit."
Reel Life Productions
Esham
Wednesday, May 24
Last Exit Live
Since releasing his first album in 1986 at the age of 13, Esham’s personalized style of acid rap has influenced rappers like Tech N9ne and Insane Clown Posse, leaving a major mark in the subgenre of horrorcore. Thirty years later, Esham Smith is still making music and expanding his community of those looking to share in the “wicked shit,” including those who in the audience at Last Exit Live on Wednesday. “The ‘wicked shit’ is a particular type of music that we do, the acid rap,” Smith says. “It’s a genre that dives into dark imagery and really mental subjects. A lot of kids choose to express themselves through this musical artform instead of violently at times, and this music originated in Detroit, Michigan.” Decades later, the "wicked shit" is carried on by horrorcore artists around the world. “Everybody keeps it going, and we are all inspired by each other,” Smith says. “Whether it’s ICP hosting the Gathering of the Juggalos or taking the culture even further in other ways, I think we all learn from each other.” Lauren Archuletta

The incomparable Melissa Etheridge.
John Tsiavis
Melissa Etheridge
Thursday, May 25
Talking Stick Resort in Scottsdale
The Melissa Etheridge live experience in 2017 is both fun and thought-provoking. The rock ‘n’ roll legend is still a musician first, going out night after night with the intention of kicking ass. And kick ass she does. “You can expect to have your mind blown and your rock ’n’ roll dreams come true,” she says. “Just to have a really good time. To leave feeling better than when you came. That’s my goal.” Etheridge’s latest record Memphis Rock and Soul, that saw her travel to the titular city and dive into the pool of awesomeness that is the Stax Records catalog. That turned out to be a wildly educational experience. “This is the music that influenced the music that influenced me,” Etheridge says. “I was directly influenced by some of the songs, but I know that the Rolling Stones, Beatles, Led Zeppelin, Janis Joplin – all of those artists were directly influenced by Otis Redding, Wilson Pickett, Sam & Dave, all of these great soul artists that were coming out. I think it really fueled rock ’n’ roll, so I wanted to go back and finish that circle and record those songs with the musicians that have played them for so long and have kept that fire burning.” Brett Callwood 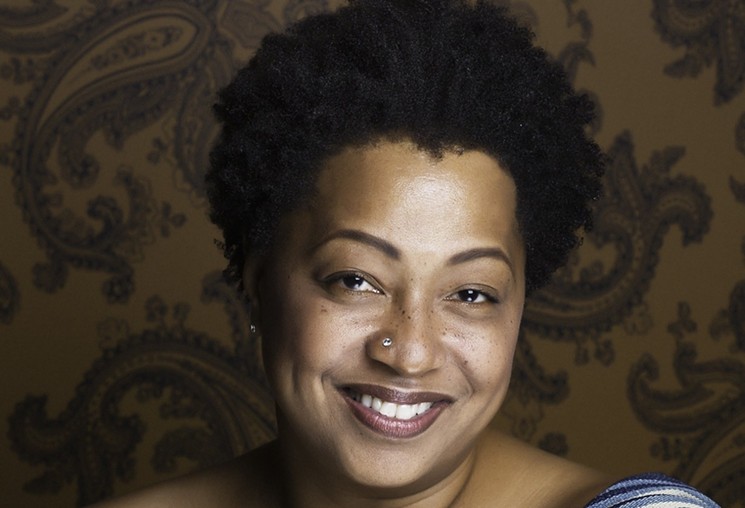 Ms. Lisa Fischer
Djeneba Aduayom
Lisa Fischer
Thursday, May 25
Musical Instrument Museum
According to her bio, Lisa Fischer clapped so hard upon hearing that Patti LaBelle had won the 1992 Female R&B Performance Grammy for “Burnin’,” a song Fischer had sung backup on, that she almost didn’t notice her name had also been called for “How Can I Ease the Pain.” (It was a rare Grammy tie.) One of the stars of the Oscar-winning 2013 documentary Twenty Feet From Stardom, Fischer has also sung with Luther Vandross, Tina Turner, and Sting, but her main gig since 1989 has been one of the Rolling Stones’ touring backup vocalists; she brings the arena or stadium to a standstill during “Gimme Shelter” every time. Chris Gray