Carlos Balli was mauled by an Arizona canine officer in January. Robbins & Curtin PLLC
Carlos Balli was ducking away from Arizona state officers in Glendale when Detective Brad Martin released a dog on him.

The canine, Storm, chewed Balli's nose flesh off. Storm also ripped a sizable chunk of skin off Balli's face, leaving him scars that will stay with him for the rest of his life.

On Friday, the 29-year-old Balli filed a notice of claim with the state of Arizona, seeking $2 million in damages for physical and psychological harm. A notice of claim is a precursor to a lawsuit.

Balli's civil rights attorney, Joel Robbins, noted in his filing that two years ago the same police dog, handled by the same Department of Public Safety (DPS) officer, chewed off a portion of an unarmed man's leg. That incident also drew media attention.

The chase began on January 17, 2019, when Balli was driving a stolen Honda Civic westbound on West Myrtle Avenue and caught the attention of an Arizona DPS officer. According to a probable cause statement, the officer observed Balli stop in a crosswalk, prompting him to follow the suspect with his lights and siren activated.

But Balli did not pull over, according to a police report. He sped up and made a turn before coming to a stop near the intersection of North 59th Avenue and West Northview Avenue. Then, Balli hopped out of the car and began to run. He jumped two fences at a residence and ran for cover in a bush, where he was detected via infrared camera by a DPS helicopter.

Martin responded to the scene with police K-9 Storm. Police claim Balli ignored multiple orders for him to show his hands. But Balli claims helicopter footage shows that he responded to orders to surrender and put both of his hands up.

In the infrared helicopter footage, Balli appears to be lying stationary in bushes when officers, including Martin and K-9 Storm, approach him. Balli appears to lift his hands the second that Storm pounces on him. Storm bites Balli for approximately 32 seconds.


In graphic body camera footage of the incident, Storm can be seen lunging at Balli when he is on the ground. Martin carries Storm's leash as the dog bites the 29-year-old's face. Balli immediately begins wailing in agony. As Storm switches his bite to Balli's left arm, the man's skin can be seen hanging off his face.

One officer points a gun at Balli and continuously yells at him to get on his stomach while Storm continues to bite the man's left arm. After the dog releases the bite, the officer wearing the body camera makes a radio call for backup. An ambulance arrives about 13 minutes later.


Balli was transported to the hospital, bleeding profusely, with skin completely torn off his underlying tissue.

Balli immediately underwent surgery. A gruesome photo (below) included in his notice of claim shows a doctor "holding Mr. Balli's nose flesh, which has been torn from his face." 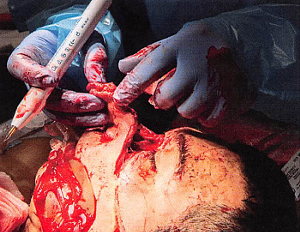 Carlos Balli undergoing surgery for his injuries.
Robbins & Curtin PLLC
The police report states that when Balli came to, he told officers that all he could remember from the evening was that he had fallen asleep in a field and woken up to police yelling at him to raise his hands before siccing the dog on him.

After he was released from the hospital, police booked Balli at the Fourth Avenue Jail.

According to the notice of claim, Balli suffered physical, mental, and emotional injuries after the attack.

A spokesperson for the Department of Public Safety declined to comment, due to the pending litigation. Balli could not be reached for comment.

Balli pleaded guilty on June 27, 2019, to three felonies related to the January chase, including car theft, fleeing from a police vehicle, and possession of methamphetamine. He faces a maximum of 12 years in prison for his convictions at a sentencing date set for July 29.

Balli's mauling was the second known incident in which Martin and K9 officer Storm led to a legal action against DPS.

Carlos Castro filed a federal lawsuit against the agency last year over an incident in which Storm, while being handled by Martin, bit his right leg for about 45 seconds. The March 10, 2017, attack in Peoria caused a gruesome injury that was recorded on body camera footage and later broadcast on 12 News.


At the time, Castro was wanted for an alleged armed robbery committed earlier in the day. Officers from DPS, the Glendale Police Department, and the Peoria Police Department responded to Castro's home to execute a search warrant, but he had fled.

The officers found him on the roof of a nearby home. According to body camera footage of the incident, Castro lifted his hands when officer approached the home. Nevertheless, Glendale detective William Johnson tased him twice, causing him to fall off the roof.

At this point, officers surrounded Castro and pinned him down. Martin also approached Castro and Storm started biting his leg. According to the federal lawsuit, an unidentified officer held Castro's leg to make it easier for Storm to chew it.

12 News reported in April 2018 that DPS investigated the incident and found that Martin did not violate policy in his handling of K9 officer Storm on the evening of Castro's mauling.
KEEP PHOENIX NEW TIMES FREE... Since we started Phoenix New Times, it has been defined as the free, independent voice of Phoenix, and we'd like to keep it that way. With local media under siege, it's more important than ever for us to rally support behind funding our local journalism. You can help by participating in our "I Support" program, allowing us to keep offering readers access to our incisive coverage of local news, food and culture with no paywalls.
Make a one-time donation today for as little as $1.
Steven Hsieh was a staff writer for Phoenix New Times from August 2018 to April 2020.
Contact: Steven Hsieh
Follow:
Twitter: @stevenjhsieh