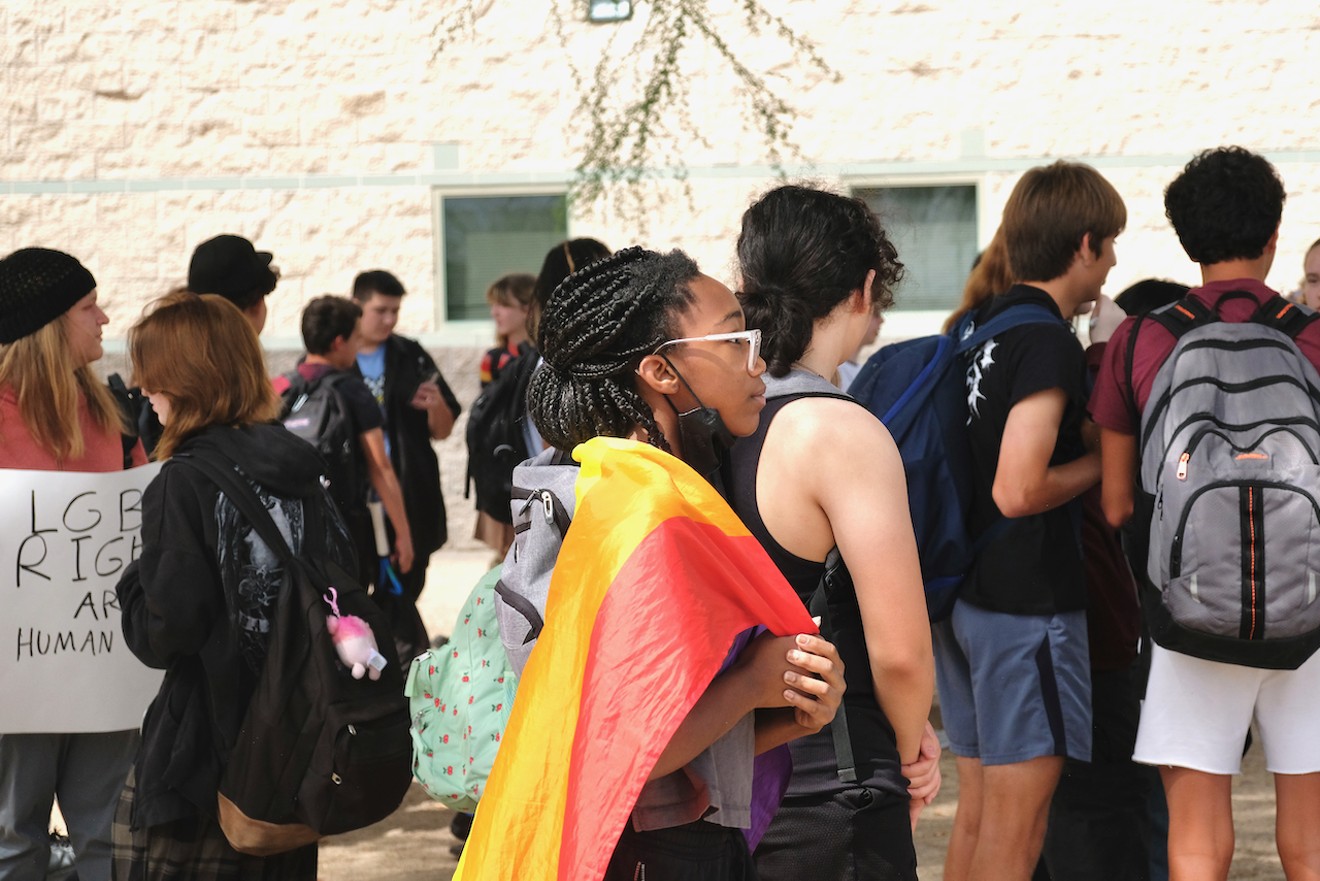 The students — led by 16-year-old Hamilton junior Dawn Shim — were protesting two laws that took effect in Arizona on September 24 that they said target LGBTQ youth. They marched, some with bullhorns, to the Chandler Public Library next door and gathered on the lawn.

"These bills are killing us," Shim said. "We aren't out here missing our school day and interrupting our education because we want to. We have been forced into it."

The walkout at Hamilton was one of at least six that occurred around the state, from Flagstaff to Phoenix. They are thanks in part to Shim, who joined with other student activists to form the organization Support Equality Arizona Schools. The group has set its focus on the new laws.

Shim was referring specifically to House Bill 2495 and House Bill 2161, which were passed in the last legislative session, signed into law by Governor Doug Ducey, and took effect earlier this month. House Bill 2495 is a sweeping ban in public schools of books or other materials that have sexual content, which is vaguely defined. Teachers still can use the materials if they have "serious educational value," but only if they obtain parental consent.

House Bill 2161 is particularly threatening for LGBTQ youth. Originally, the legislation contained explicit language forcing teachers to out LGBTQ students to their parents. Its final version was pared down but still requires that parents have access to all health, counseling, and electronic records of their children. The bill also allows parents to sue schools should their "parental bill of rights," as outlined in the law, be violated.

Shim, in their comments to the crowd, described the bills as part of a threat beyond Arizona. "Across America, more and more anti-LGBTQ legislation is being passed," they said. Ducey signed other legislation earlier this year that targets LGBTQ and gender nonconforming people, including one that allows foster care agencies to refuse to serve LGBTQ people and others based on religion, according to the Human Rights Campaign.

Ducey also signed into law a ban on some gender-affirming health care for trans youth and another that prevented trans students from playing on sports teams consistent with their gender.

At the rally on September 29, students told the crowd about homophobia and transphobia they faced at Hamilton High School or at home. One student who spoke with Phoenix New Times, 15-year-old Alex, said he felt supported now by his friends but had mixed experiences with acceptance at school. He did not expect the turnout he saw, he said.

Nor did Shim, who was nearly brought to tears by the number of students who took part. Shim told New Times that they hoped the Chandler Unified School District, which includes Hamilton High, would take the walkout seriously.

Health of LGBTQ Students 'At Risk'

On September 28, the night before students walked out, school board members voted to approve various policy changes in accordance with the new laws passed in the state. The Arizona School Board Association created a series of policy change recommendations to bring schools into compliance with laws that went into effect this year.

The policy changes included banning trans youth from participating on athletic teams that match their gender, removing some library and educational materials, and other updates to bring the district into compliance with the anti-LGBTQ legislation that Ducey signed into law this year. Board member Lindsay Love dissented and said at the meeting that the policy changes "could create situations that put [LGBTQ students'] physical, emotional, and mental health at risk."

But the board voted to pass the policies 4-1.

"[The board] told me that they can't do anything," Shim said.

So students walked out.

For nearly the entire sixth period, the students took turns sharing their stories as the crowd grew larger. Some carried signs, or wrapped themselves in rainbow flags. Several told New Times that the amount of support from their peers was gratifying to see.

"It is embarrassing that we live in both a state and a country where people are at risk simply for being who they are and loving who they want," Blues Patrick, another Hamilton student and the president of the school's Gender Sexuality Alliance, told the crowd to cheers.

"We should not have to live in this pseudo-apocalyptic bullshit that we're dealing with right now."

Click to View 16 slides
KEEP PHOENIX NEW TIMES FREE... Since we started Phoenix New Times, it has been defined as the free, independent voice of Phoenix, and we'd like to keep it that way. With local media under siege, it's more important than ever for us to rally support behind funding our local journalism. You can help by participating in our "I Support" program, allowing us to keep offering readers access to our incisive coverage of local news, food and culture with no paywalls.
Make a one-time donation today for as little as $1.