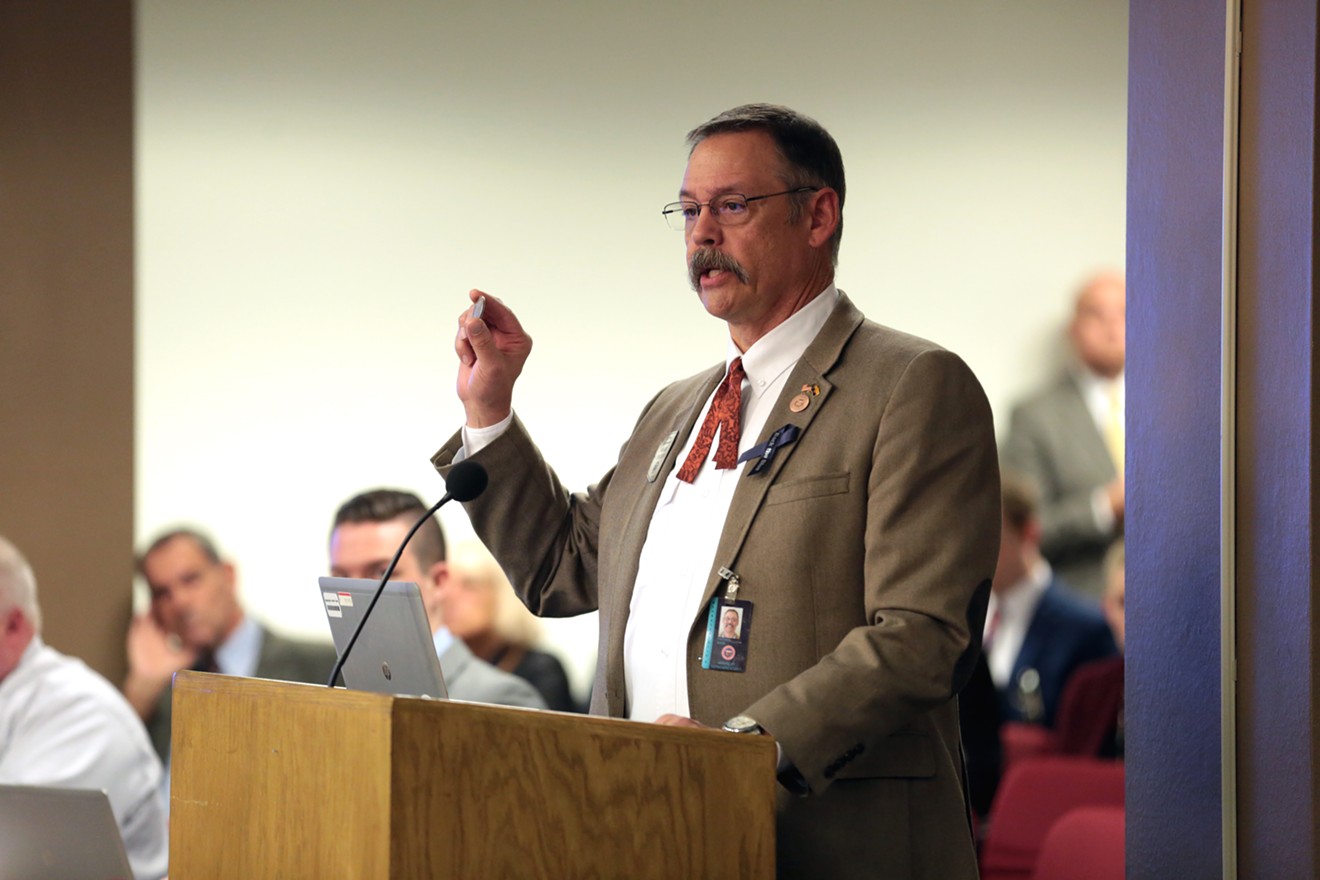 State Representative Mark Finchem. Gage Skidmore/Flickr
Republican Arizona Representative Mark Finchem released text messages on Tuesday that show him coordinating with Ali Alexander, a prominent conservative activist who helped organize the infamous January 6 rally at the U.S. Capitol that became a deadly riot, about Finchem's appearance at the event and the broader effort to overturn the 2020 election results.

The texts discussed Finchem and Alexander coordinating on messaging and travel plans related to "Stop the Steal" rallies in Arizona and in Washington D.C. Other texts discussed how to help Texas Attorney General Ken Paxton's December lawsuit to try and overturn the election results.

Alexander has come under scrutiny for his prominent role in promoting the Republican effort to overturn the 2020 presidential election results and the rally that led to the storming of the U.S. Capitol — as well as his ties to other Arizona elected officials. He claimed in a video that he "schemed up" the plan to use public protest to pressure congress during Congress's certification of the electoral college votes with Arizona Republican Congressmen Paul Gosar and Andy Biggs. Biggs has denied any involvement with him. Alexander was in Phoenix on December 19 for a "Stop the Steal" rally, according to news reports, and in a recent interview, he said the "Stop the Steal" movement in Arizona "started with" Finchem.

Arizona GOP Chair Kelli Ward also famously promoted violence by promoting a tweet from Alexander that read, "I am willing to give my life for this fight."

An attorney representing Finchem, Alexander Kolodin, sent text messages to New Times on February 16 that show Finchem communicating with a person he said is Ali Alexander on January 5 and 6.

Finchem was in Washington, D.C. on January 6 and posted a picture of the protesters on the steps of the Capitol with a sympathetic caption. However, he has claimed publicly that he was there to give a speech at the "Stop the Steal" rally and blamed the riot on baseless conspiracy theories that anti-fascist activists caused the violence. 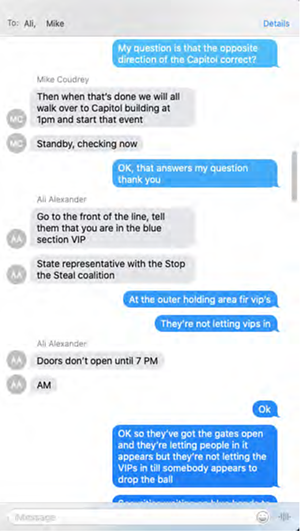 Screenshot courtesy Alexander Kolodin
On January 5, Finchem texted a group thread that featured Alexander and another conservative activist, Michael Coudrey, saying that he would not land at Ronald Reagan Washington National Airport until later that afternoon. Alexander responded, "ok."

In another series of text messages that are undated but appear to precede January 6, Finchem thanks Alexander for "covering his hotel room" and claims that he is working on an "amicus brief" that would be signed by Arizona legislators in support of Paxton's lawsuit.

"We are preparing an Amicus Brief right now where a number of Arizona legislators are signing on in support of AG Paxton," Finchem wrote. "This is not ready for release yet but I want to make sure it is on your radar so we can light up the social media universe."

"Got it," Alexander replied. "We are working with three attorney generals and a couple of state legislators. Let us know where you go and if you hit a dead end, let us know and we'll get something wiggled out for y'all.

On the morning of January 6, the day of the riot, Alexander sent Finchem directions on how to navigate the rally.

"Go to the front of the line, tell them that you are in the blue section VIP," Alexander wrote. "State representative with the Stop the Steal Coalition."

Finchem later asked the thread to confirm that he was still expected to give a speech at the Capitol.

"You still have me speaking at the capitol?" Finchem wrote.

Other text messages show Coudrey telling Finchem to get to the Capitol and Finchem saying that he got "swept up" by the crowd and that he is riding a golf cart towards the building. 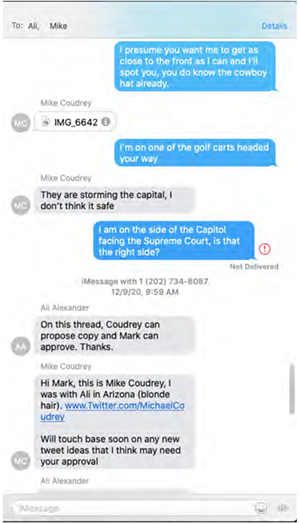 Screenshot courtesy Alexander Kolodin.
Then, Coudrey writes in the thread, "They are storming the capital, I don't think it's safe."

Another message from Finchem appears below Coudrey's text about the riot, though it is undelivered: "I am on the side of the Capitol facing the Supreme Court, is that the right side?"

Their correspondence wasn't limited to discussions regarding Finchem's appearance at the January 6 rally. Finchem and Alexander exchanged messages over the course of December 2020 about tweets, various "Stop the Steal" rallies, news developments, and strategy.

For instance, on December 7, Alexander asked if Finchem could be in D.C. the following weekend for a speaking event and rally. Three days later, on December 10, Finchem texted Alexander, "Now may not be the time but I think you wanted to sit down and talk about strategic messaging. I'll be available tomorrow after 4:00."

Alexander replied, "Let's try to do some thing, I'm under a lot of pressure because we have a couple hundred thousand people coming in and I'm trying to keep 50 speakers organized ;)"

On December 13, Alexander texted Finchem, "Travel home safe my friend." Finchem responded by thanking him for the "opportunity" and telling him to "let him know" if there was anything else he could do to "help" Alexander and his "team."

"I'll be in Arizona before too long," Alexander replied.

Other texts dated December 17 show Finchem and Alexander coordinating regarding a rally at the Arizona Capitol. Finchem wrote that he would be tied up in Tucson during the event but could "race up the I-10" to get  there.

On December 22, Finchem sent a lengthy test to Alexander discussing his thoughts on Alexander's messaging.

"It occurs to me that every story needs a victim, a villain, and a hero. You've done a good job of defining the victim (the people) and the reluctant hero (me), but have we defined the right villain?" Finchem wrote, going on to reference Governor Doug Ducey and the Maricopa County Board of Supervisors.

In another series of text messages — the date of this exchange is unclear — Alexander asks Finchem to come to D.C. for the "historic" January 6 rally. They also exchanged ideas about tweets.

"Is there a call for a 7 million march on the Capitol? Nothing says support like millions of people blocking streets so Congress is forced to pay attention," Finchem wrote. "Tweet just went out."

"Got cha," Alexander writes back.

Finchem poses another idea for a tweet, a shot at journalist Keith Olbermann, prompting Alexander to urge him to "let that other tweet breathe for an hour."

Finchem has been fiercely criticized by Democratic legislators for his involvement in the events of January 6.

On January 13, local Democrats called on the FBI and U.S. Department of Justice to investigate the role of local elected officials — including Finchem — in causing the violence at the Capitol. Last week, House Democrats called for Finchem to be expelled because he “participated in, encouraged and incited the events of Jan. 6" and was complicit in “insurrection and rebellion." However, despite facing dozens of ethics complaints over his conduct, Finchem was eventually cleared of any wrongdoing by the Republican chair of the ethics committee in the Arizona House of Representatives, according to the Arizona Republic.

Finchem did not respond to New Times' request for comment on the text messages. But in his email that included the text messages, Kolodin wrote, "Rep. Finchem is voluntarily choosing to release the attached to the media." He also linked to a story published today by the Arizona Daily Independent, a conservative local news site, about an ethics complaint filed by Finchem against 42 Democratic legislators who "falsely and maliciously filed a criminal referral against him with the FBI and the U.S. Department of Justice." (Update: Finchem got back to New Times about an hour after publication of this article, saying he had "No comment, On advise of legal counsel.....")

Prior to the release of the text messages, Finchem had refused to release personal phone records related to January 6 after New Times and the Arizona Republic filed public records seeking the documents. A letter authored by Kolodin argued that the records are not subject to public records laws and cited the "threat of criminal prosecution" as a rationale for refusing to release the documents.

When asked by New Times' if the new release of Finchem's text messages were an accommodation of the previous requests for records, Kolodin wrote in an email, "Since the Democrats filed a bogus criminal complaint against Representative Finchem we obviously are careful with what we are releasing. Therefore, these are the documents that we have reviewed that have been cleared for release."