That leaves Langu with a menu of nothing but pizza, which he makes with nobody but himself. Not only does this one-man pizza shop somehow manage to pump out pies, Langu refuses to cut corners. He uses cold fermentations that exceed 24 hours, olive oil that peppers the back of your throat, and aluminum pans to crisp his grandma-style pizza.

And these square pies, though thick, are improbably light.

In the taxonomy of pizza, Neapolitan lords over all other pizza classes. If you eat in Phoenix, you probably know this style like you know the creases in your hands: airy dough, crack-thin crust, tiny pies blazed at north of 800 degrees. The style comes from Naples, the cradle of pizza, and it has long been king.

But the world contains other strange and beautiful pizza styles. Lots of others. And after a decade of Neapolitan monopoly in the States, we should feel cautious joy at the emergence of new ones. 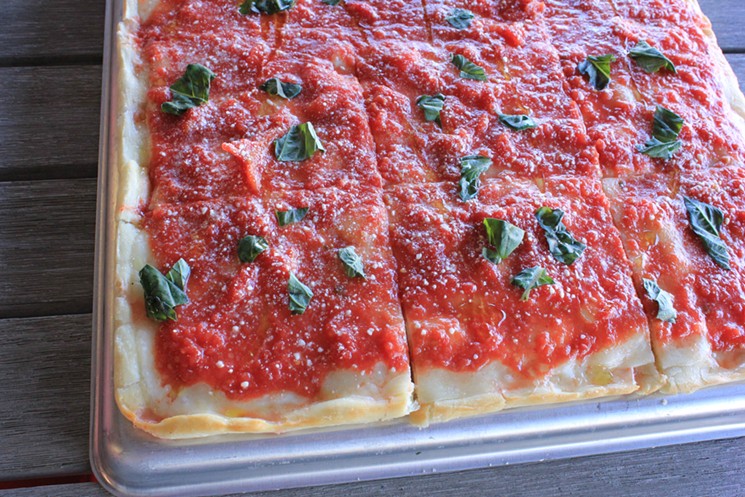 A tray of grandma pie.
Chris Malloy
Langu’s grandma pizza is a thick-crust pizza style. Notable entries in this category include Sicilian (very thick), Roman al taglio (not quite as thick; cut with scissors; the Eternal City's most popular slice), Detroit-style pizza (often made with Wisconsin cheese; enjoying a U.S. moment right now), and tomato pie (bread dough topped with sauce; popular in Philly and South Jersey). Grandma pie is pizza baked simply in a sheet pan the way you might make pizza at home.

“I personally like grandma-style because I like a little bit of a fluffy texture with crispness between,” Langu says. “It’s gotta be light and airy, like a baguette.” Adrian Langu, Old Town's newest pizza maker.
Chris Malloy
Langu got into the style thanks to friends from his hometown New York, buddies from Adrienne’s Pizzabar and Harry’s Italian, both in Manhattan. Langu learned to make pizza working in Big Apple pizzerias while growing up. Called “the Coney Island kid,” Langu gets crap from his buddies back east for some of the things he’s doing at Crisp. For one, he uses reputed Caputo 00 flour. Friends wonder why he suffers the expense.

His standard grandma-style pie comes topped with torn basil. Though thick and crunchy on the bottom, the pizza has surprising lightness. It’s Neapolitan in spirit, somehow: Neapolitan in a thick-crust vessel. We're in oxymoronic territory here, that of spherical cubes and jumbo shrimp. Langu's squares have more finesse than you find in your typical heady, gooey, thick-crusted pie. 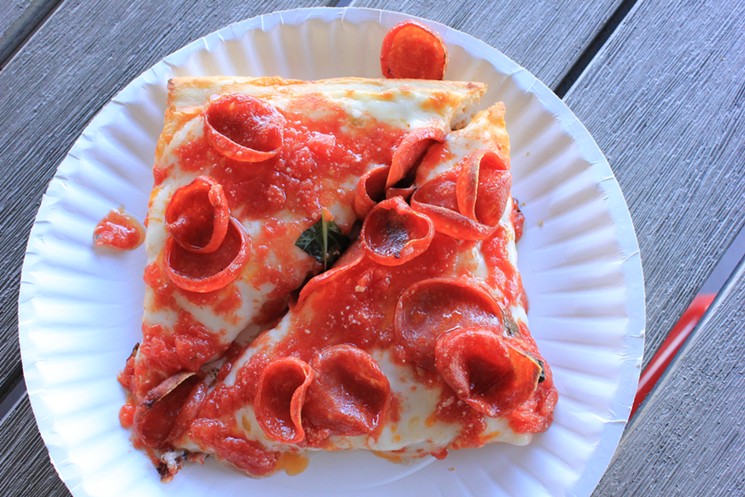 Pepperoni sliced diagonally.
Chris Malloy
Old Town's newest pizza maker stacks each detail toward this lightness. This is the baguette quality he was talking about. Achieving this airy sensation drives Langu's approach to pizza.

Langu utilizes 00 flour and a long fermentation. He uses two olive oils. The Californian extra-virgin olive oil he drizzles on pizzas right before baking is a grassy variety, one that gently needles your throat, the oleocanthols coolly burning. Langu doesn’t cook his tomato sauce, letting it stay clean and fruity. He makes his sauce from some tomatoes he hand-mills, some he hand-crushes. Langu is almost a one-man operation (an employee helps with the register).
Chris Malloy
His 16-by-16-inch pies contain 12 slices; they’re so light you practically inhale bites. The thin crisp layer on the very bottom of the crust, created by oiling the pan, seems to soften the airy strata above by contrast.

You can order pizza by the pie or slice. During lunch, Langu keeps a red-sauce pie or two on hand, and when folks order a slice or three, he tops them with pepperoni or whatever the customer has ordered. Toppings are plain. They're in keeping with old-school pizza staples.

A white, grandma-style pie.
Chris Malloy
His white pies veer in another direction. Spread with ricotta, layered with mozzarella slabs, and finished with Pecorino cheese, the pies brings some of the heft you expect from a thick pizza. Bubbled and lightly browned, the mozzarella reaches a flavor like the one you get when you toast cheese too long: intense, nutty, almost like a cheese cracker. This flavor goes nicely with the faint sweetness of the ricotta (accented by cherry tomatoes if you get them). Softness is the dominant sensation, as the cheese’s moisture and oils have seeped into the crust during the pie's time in the oven.

Langu doesn’t crank his gas-fired oven much higher than 500 degrees. His thicker pizzas take a little more time, and he’s only one guy. Though his shop is sleek (and red, white, and brown — pizza colors), this isn’t a place you go expecting sterling white-glove service, simply because Langu is doing so much. Langu, though, does like to chat with customers.

Crisp Premium Pizza may be a step in an upcoming Phoenician thick-crust evolution. In addition to or in fateful revolution against Neapolitan dominance, we may see more thick-pie styles on the horizon. Rejoice, pizza eater, for what may be coming. Langu’s shop deserves a spot in your rotation.