Here's the 2018 Lineup for Canal Convergence 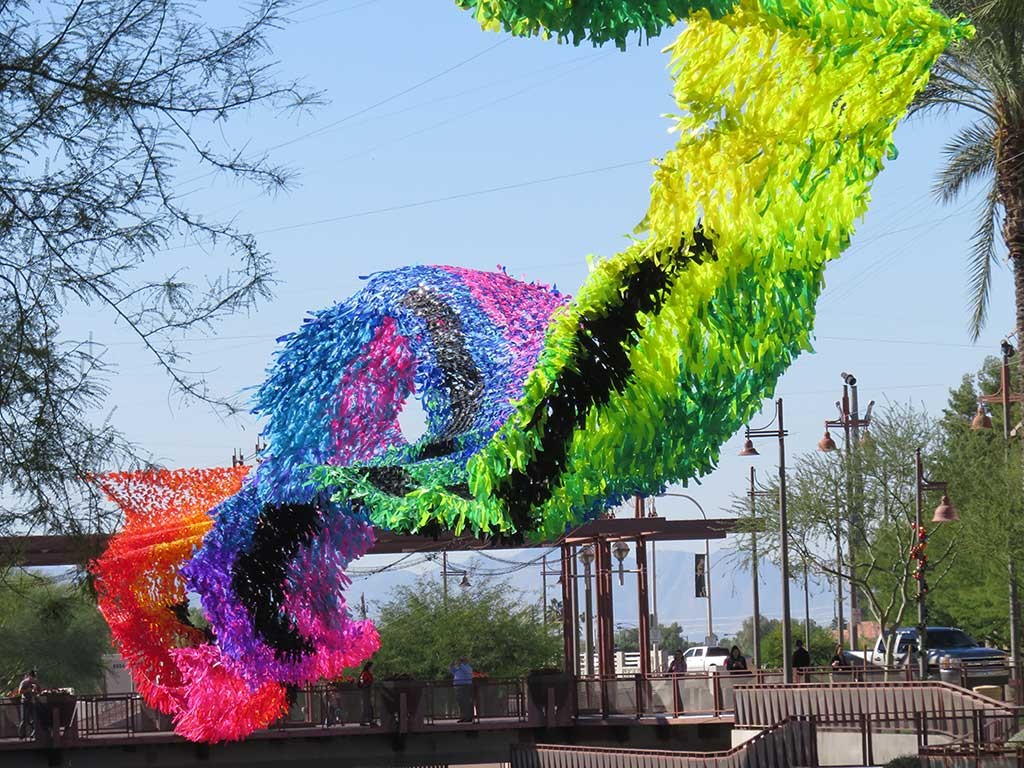 The free event will include an eclectic mix of public art, performance, and workshops that reflect its three themes: water, art, and light. Hours each day are 4 to 10 p.m.

The fall 2018 event will run 10 days, as will the next Canal Convergence, scheduled for fall 2019. That's the pattern moving forward, as the event becomes an annual 10-day affair.

The music lineup for Canal Convergence includes Mariachi Pasion.
Scottsdale Public Art
This is the sixth iteration of Canal Convergence, which is held along the banks of the Arizona Canal on the Scottsdale Waterfront, which runs from Goldwater Boulevard to the Soleri Bridge near Camelback Road. It was first launched under the leadership of Donna Isaac, who resigned as director for Scottsdale Public Art in 2016.

Scottsdale Public Art, now headed by Kim Curry-Evans, is presenting Canal Convergence in partnership with the city of Scottsdale and Salt River Project. The event includes visual art, music, dance, and spoken-word poetry by a mix of local, national, and international artists.

Public art offerings will include the return of Los Trompos, which are large spinning tops with built-in seating. Woven with colorful fabric, they’re the work of Hector Esrawe and Ignacio Cadena. Expect to see them dotting the canal from February 23 to March 5.

Desert Sun will change in appearance between morning and night each day of Canal Convergence.
Scottsdale Public Art
Canal Convergence also will feature Reflection Rising, a site-specific kinetic sculpture that’s been on view since November 17, 2017. Created by Patrick Shean, it comprises hundreds of thousands of brightly-colored streamers that respond to shifting winds.

For an installation called Desert Sun, London-based Jotta Studio will use solar energy to power a piece that will float just above the water’s surface along the canal, changing in appearance over time to capture the variations of sunrise, midday sun, and sunset.

Canal Convergence includes Flawless, an installation of more than 4,000 luminescent leaves.
Scottsdale Public Art
For another installation, called Globoscope, the French design lab Collectif Coin will dot spaces along the canal with hundreds of illuminated orbs.

The Canal Convergence lineup also includes more than 4,000 bioluminescent leaves that glow in the night sky, which will be suspended over the canal. Titled Flawless, it’s the work of Studio-ALEX-Architectural Light Experience, founded in 2014 in Amsterdam and Milan.

Canal Convergence includes the Colorado-based Barter Boat.
Scottsdale Public Art
In addition to explorations of energy and light, the festival will address the need to reduce, reuse, and recycle.

Hence the inclusion of an interactive art project called Barter Boat, which will barter with visitors for small objects, and deal in intangible items such as recordings of event performances. It’s the work of artist collective RADAR Art, which plans to package objects it acquires in Scottsdale for trade at its next destination.

There’s even an opportunity for visitors to get a sneak peek of the next Canal Convergence event, which is happening later this year.

Connect with Choi + Shine at Canal Convergence, where you can learn about a piece they'll unveil in Scottsdale this fall.
Scottsdale Public Art
Choi + Shine Architects is creating a piece called Arizona!, comprising a hand-crocheted lace ribbon measuring 8 feet tall and 650 feet long that's designed to “elegantly meander over and around the canal in Scottsdale" from November 2018 to March 2019.

Choi + Shine will be at Canal Convergence on February 23 and 24, where they’ll discuss their upcoming project with eventgoers, and seek out people with crochet experience to participate in making it happen.

The preliminary lineup includes spoken-word performance as well, by poets selected through an open call issued by Four Chambers Press, a Phoenix-based literary magazine and small press that often collaborates with other arts and culture organizations.

Four workshops have been announced — including a dance workshop with Nicole Olson, which will give community members the opportunity to begin creating their own site-specific dance work, and a workshop with Choi + Shine Architects. Tempe artist Eli Richard is leading workshops in poster printing and printing your own merch (short for merchandise).

Additional Canal Convergence offerings will be announced this month.

Editor's note: This post has been updated from its original version, and corrected to reflect the fact that RADAR Art is not based in Colorado as originally stated.