Kent M. Nicholas
Patrons sip craft brews in Goldmine.
Finding the best underground beer bunker to hole up in may become a reality in the wake of political leaders debating who has the biggest nuclear button. If you’re looking for a bunker loaded with a variety of specialty small batch beer, you’ll want to seek out Goldmine Underground Tap & Barrel.

Goldmine is 16 feet under Goldwater Brewing Co. Located in downtown Scottsdale, Goldwater Brewing is a brewery with a growing reputation. Goldwater was one of four Phoenix breweries to medal in 2017's Great American Beer Festival.

Goldmine is a novel place to sip Goldwater's brews.

Goldmine is housed in a former shooting range. The place is rustic and concrete-walled and runs against the kind of pomp one sees in this part of Scottsdale. Goldmine is a great find for beer drinkers. The add-on serves Goldwater staple brews and will be releasing its own barrel-aged beers in the next few weeks.

As you descend into the basement of the former Mandell’s Shooting Supplies, a vintage circular sign greets you with a playful teddy bear holding a machine gun – a nod to the location’s history, and also a nod to Goldwater's present, as Machine Gun Teddy is one of the breweries's most acclaimed beers. It's an American Brown Ale with more hints of caramel than chocolate, and it's so expertly made that it scored bronze at the national festival.

Drinking in Goldmine feels new and different, even in a beer scene where new is the norm.

Environment elevates the experience. Drinkers are surrounded by cinderblock walls, steel vats of beer, and repurposed wooden barrels of tequila, scotch, and bourbon. Barrels line the walls. People stand sipping brews between them. 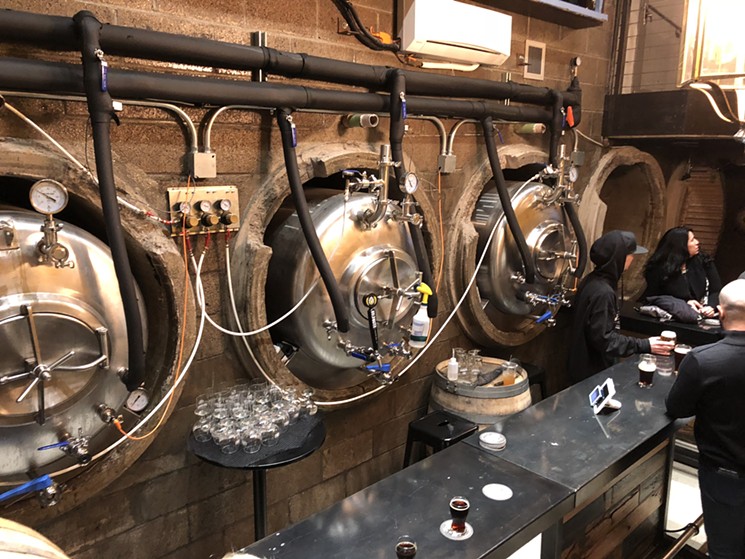 Goldmine serves Goldwater Brewing beers
Kent M. Nicholas
The initial engineering conundrum for the underground beer hideout was getting the long, heavy stainless steel tanks into the basement with proper alignment for storage. The engineers used a variety of ceiling pulleys and cables to maneuver the brite tanks into narrow “shooting alleys” that now cradle the tanks horizontally.

Piping beer from underground storage tanks to the main-level brewery (above Goldmine) was an additional engineering puzzle. Not only do these pipes go up, but they also travel south and under a separate business before reaching the taps in Goldwater's primary taproom.

It's open on Fridays and Saturdays from 6 to 10 p.m. The underground bunker has a capacity of 15 to 20 people. (You can reserve the space for a private party.)

It’s reassuring to know that the brewery continues to be a family affair, with Greg McClelland, the founder and director, mixing it up with patrons. It’s not unusual to find one of the younger McClelland boys working in the brewery or sampling the latest beers on tap.

With Goldmine, the family dedication has paid off.