Dorian Boddie
Hop Central is now open in Chandler
It's no secret that Phoenix is now a beer town. The number of breweries that have opened in the last three years is staggering. The ranks of relative newcomers includes the likes of Wren House and the four Arizona breweries that medaled in the country's biggest beer festival last year. Here, we've gathered three cool new places to drink beer. One is a pop-up in a beloved market, another is a subterranean drinkery, and the third is a brewpub pouring the good stuff. Cheers to Phoenix beer.

Dorian Boddie
HOP Central Brewery and Taproom
HOP Central Brewery and Taproom is a new Chandler drinkery that features dozens of beer taps, a custom-made walk-in cooler, and ample casual seating. Brewer Mike Heerbrandt’s goal was to build a “really cool place to drink some beers." He has done just that. There's no shortage of great brews on tap, including local favorites like O.H.S.O., SanTan, and Huss. Arguably, the main event is the House IPA. Heerbrandt collaborates with Pedal Haus Brewery to make this beer using the Pedal Haus facilities in Tempe. It has a golden-copper hue and weighs in at 6.1 percent ABV. HOP Central will soon be expanding its selection of original craft beers. The long-term goal is to have three to five offerings of house brews consistently, with seasonal creations rotating in and out of the tap lineup. 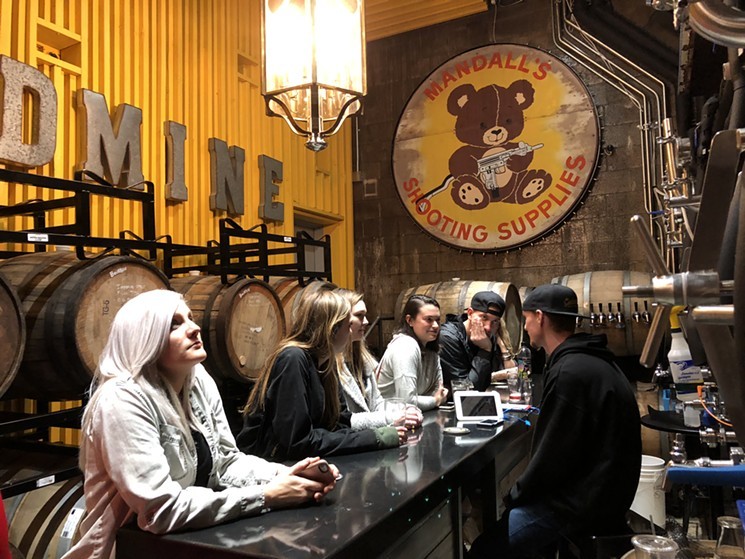 Patrons sip craft brews in Goldmine.
Kent M. Nicholas
Goldmine Underground Tap & Barrel
Goldmine Underground Tap & Barrel, a bunker located 16 feet under Goldwater Brewing Co., is a novel place to sip Goldwater's award-winning brews. Goldmine is housed in a former shooting range. As you descend into the basement, a vintage circular sign greets you with a playful teddy bear holding a machine gun – a nod to the location’s history, and also to Goldwater's present, as Machine Gun Teddy is one of the breweries's most acclaimed beers. Machine Gun Teddy is an American Brown Ale with hints of caramel than chocolate. Brews like this one are piped from the primary tap room upstairs to the storage tanks in Goldmine below, where you can sample cool brews and mix it up with a small crowd.

Huss Brewing is the first brewery spotlighted in DeSoto's pop-up program.
Chris Malloy
Huss Brewing Pop-Up at DeSoto Market
Huss Brewing Company is the current pop-up brewery at DeSoto Central Market, the Phoenix food hall that started a pop-up residence in January. Every three months, a new brewery will rotate into a market storefront and hook kegs up to taps. The market's liquor license extends to the whole property, meaning that you can take your beer to dining tables across the room or out to the patio. Huss Owners Leah and Jeff Huss set up 12 taps in the DeSoto space. They are pouring favorites like Coffee Kolsch and Scottsdale Blonde as well as specialty brews specific to the pop-up (chocolate-raspberry Coffee Kolsch). Marketgoers will be pleased to have what is essentially a full tap room in one of the coolest places to eat in town. Nothing like a cold brew to go with a patio game of cornhole and fresh oysters, steamed buns, or a fried chicken sandwich.