8 Women DJs You Need to Know

Courtesy of BRAVO! Entertainment
DJ Javin runs her radio spots the same way she runs her live shows: like a true master.
Phoenix isn't the town from Footloose. If you got the urge to cut a rug, you don't have to secretly rage-dance in an abandoned warehouse. Instead, you can tap into your inner Kevin Bacon and freak out the squares with your sweet moves during any of the Valley's many, many dance nights.

Whatever your poison is, someone in town is mixing it. From goth nights and hip-hop happenings to '80s parties and '90s nostalgia trips, there are DJs ready to put that flava in your ear.

Not sure where to start? Here's an introduction to some of the best women DJs in the Valley. And it's by no means definitive. There are newcomers and scene vets alike who are doing great work but aren't on here. That said, these are the eight DJs we'd call up first if we had to assemble an Ocean's 8-style crew of turntable masters to steal the show.

If you listen to Power 98.3 or 101.9, odds are good you’ve heard DJ Javin on the ones and twos. A fixture in the Phoenix and Scottsdale clubs, DJ Javin also shows off her mixing skills on the radio with two weekly gigs. Monday through Friday, she mixes from 6 to 7 p.m. on Power. She also gets in the booth for Pitbull’s Globalization (Sirius XM CH. 14) at 9 p.m. on Mondays. Able to cut and mix with ease, her work is knotty, intricate, and guaranteed to get you moving.

Where you can hear her play: When she's not on the air, you can find her spinning at Paris Pride Thursdays, rocking the pool deck at W Scottsdale, and playing at various clubs in Phoenix and Old Town. For more info on where she'll be next, see DJ Javin's website. 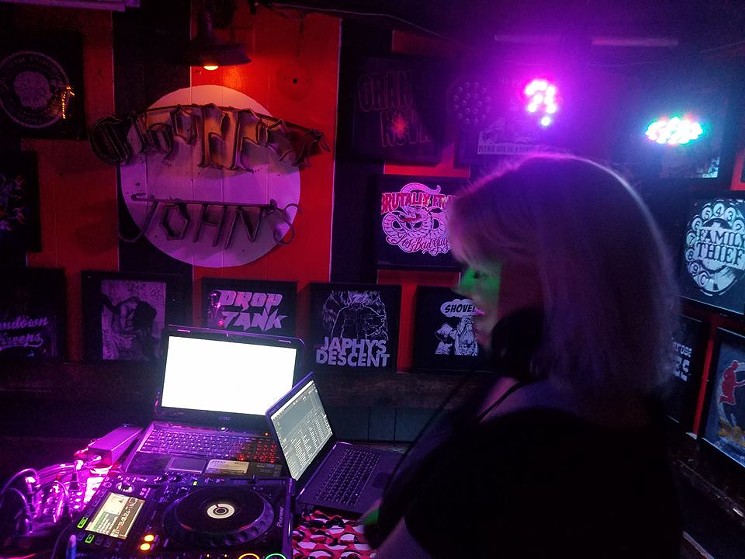 //she// casting a dark spell over the crowd at Chopper John's at the Cipher dance night.
Joshua Franklin
//she//

For lovers of ghoulish and grim sounds, Phoenix is a great place to get your dance on. The Valley’s had a vibrant goth scene for years now, and you can find different dark music in places like Stacy’s on Melrose, The Rogue Bar, and Palazzo. If you’ve been to dance nights like Necrotek, Cupcake!, or LILITH, you’ve likely seen Shelly Winergarner (a.k.a. //she//) do her thing. The DJ cut her fangs at house parties and Sadisco. Currently on a “classic EBM kick,” //she// can be heard spinning groups like Youth Code, Boy Harsher, and Libknecht in her sets.

Where you can hear her play: Cupcake! at The Rogue Bar, Necrotek at Club Dwntwn.

When it comes to putting down grooves, look no further than Stoneypie. The nom de guerre of Tara Lopez, Stoneypie has been a familiar face during club nights at Bar Smith, Crescent Ballroom, and Bikini Lounge (where she first got her start, guest spinning at Djentrification’s long-running 602’sdays). A multiformat DJ, Stoneypie mixes genres with wild abandon. Soul, house, disco, electronic, footwork, and dozens of other rhythms get baked together to make Stoneypie’s sound.

Where you can hear her play: She's been a resident DJ at Crescent Ballroom for some time now. Check out Stoneypie's website to find out where she'll be next.

As the brains behind the Vanishing Show concert series in Tempe, A Claire Slattery has already made her mark as a community organizer and music producer. But she's also a formidable DJ. Getting the DJ bug after learning how to mix for a Halloween party at Cornish Pasty Co., Slattery has gone on to spin at a dizzying variety of dance nights. While she favors using vinyl whenever possible, she'll dip into digital tracks, too — especially when she's playing "guilty pleasures" like TRL pop, Britney, and boy bands.

Where you can hear her play: TRL's '90s House Party at The Rebel Lounge, Guilty Pleasures at The Van Buren.