Cider Corps
Spring training fans get a discount at the cider Mesa brewery.
Mesa-based craft cider brewer Cider Corps has just released cider slushies made from the hard cider that it  brews.

What is a cider slushie? Think frosé but made from apple juice that will get you drunk.

Cider Corps is now offering these adult sno-cones at discounted prices for spring training attendees. For those who catch a game at Mesa's Hohokam Stadium or Sloan Park, Cider Corps is offering $1 off a pint, slushie, or cider flight. All you have to do is show your ticket. 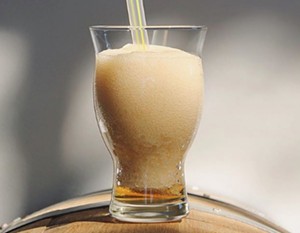 Storm the Peach is a peach-inspired cider slushie.
Cider Corps
Cider Corps opened in September 2017. The cidery brews in an old police station and is run by brothers Josh and Jason Duran. If you are unfamiliar with hard cider, the drink is made by fermenting apple juice and has been made in America for hundreds of years. With more than 7,000 kinds of apples, the number of potential ciders is just about endless.

"At first we tried putting our ciders straight from the tap into the machine, but the full flavor was lost in the freezing process," says Cider Corps co-owner Josh Duran. "Now we work with each flavor to create the right ratio of our base cider and fruits."

Storm the Peach takes the concentrated peach cider and transforms it into a rich peach cider slushie. On top of cider slushies on offer, Cider Corps has 15 cider on tap at all times. Flavors include standard apple, prickly pear, and hoppy apricot.

Grab a hard cider slushie for $7 from now through the end of summer.