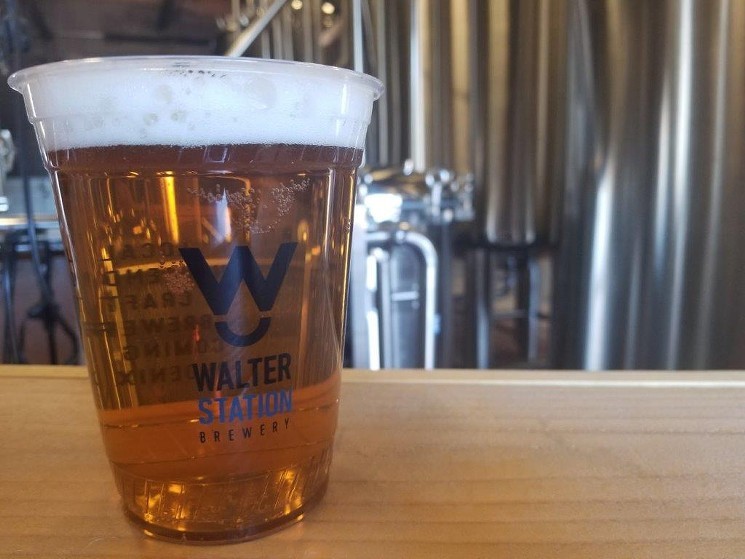 Jim Erickson
Walter Station will have several beers on tap.
The warm weather is here. Beer is always in season, but they rays provide more occasions to crack a brew, kick back, and enjoy life. What is happening in the Phoenix brew scene is amazing. In the last year or two, we've seen a run of craft-beer bars, new breweries, and new beers. You can find some amazing beers here in styles that 10 years ago would have been impossible to find: Berliner weisse, gose, hazy IPA, and so on. Here, we've collected brews news you need. Some of these places aren't sparkling new, and some are yet to open, but if you live in Phoenix and you drink beer, you'll be happy to know about these bars, breweries, and beers as summer heats up and your thirst intensifies. 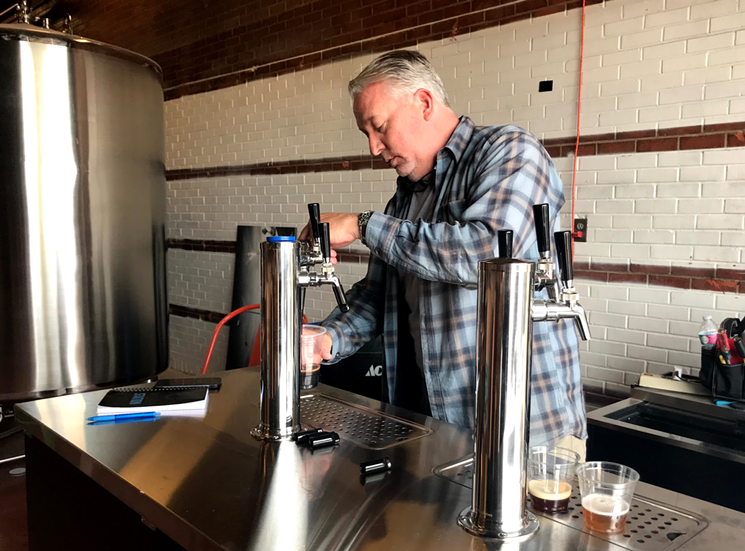 Jim Erickson creates all the brews that will be served at Walter Station.
Samantha Pouls
Walter Productions Opening Brewery in June
(4056 East Washington Street, Phoenix)
Walter Productions is known for creating larger-than-life event props and pyrotechnics. Now, the Arizona-based team will create beer at Walter Station, its brewery that opens in June. Jim Erickson, master brewer, has concocted several Arizona brews, including one called the Americano. "It's a variation on a pale ale, but it also has something I found a few years ago called Neomexicanus," Erickson says. Neomexicanus is a hop native to New Mexico. Erickson will also be barrel-aging beers. "The barrel program is essentially aging beers in oak barrels that have previously been used for liquor," Erickson says. Along with the oak-rich flavor of the barrel, these beers will pick up traces of bourbon, whiskey, or tequila.The brewery's home will be the old Station 29 firehouse on 41st and Washington streets.

12 West's Weisse City, a Berliner Weisse with Meyer lemons from Agritopia.
Chris Malloy
12 West Brewing Drops a Grand Theft Auto-Themed Beer
(3000 East Ray Road, Barnone, Building 6, Suite 110, Gilbert)
Anyone who played video games last decade will remember Grand Theft Auto: Vice City. Last week, 12 West Brewing in Gilbert released a beer that nods to the game. The brew is called Weisse City. Cans come decorated with cartoon art that pulse with color. More than 200 pounds of lemons were used to brew Weisse City, and they all came from within Agritopia, a few hundred feet from the tap room. Tartness created by kettle souring is on the soft end, dovetailing with the perfumey character of Meyer lemons. With a mellow citrusy backbone and an ABV of 4.3 percent, this beer is crushable. 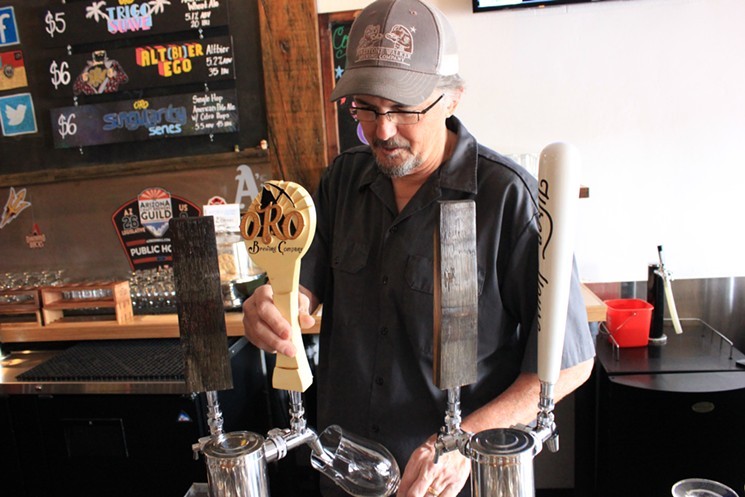 Chuck Wennerlund, co-owner of Oro Brewing Company.
Chris Malloy
Kick back at Oro Brewing Company's Nanobrewery in Mesa
(210 West Main Street, Mesa)
Oro Brewing Company uses a three-barrel brewing system, making it a nanobrewery. Most of Oro’s 12 taps pour beers made in the back room. The beauty of such small batches is that they run out often, meaning fresh beer is being finished, kegged, and hooked up all the time. One example is a pretty wild beer called Give Peat a Chance. Peat refers to the smoke-bomb flavor that lights up your central nervous system when you sip a smoky Scotch. Give Peat a Chance is a peat-smoked extra stout. The beer brings the chocolatey and malty notes of your typical stout, but, from early on, sings with a round smoky flavor. It’s a little offbeat. It’s pretty cool. This nanobrewery pours some fresh brews. 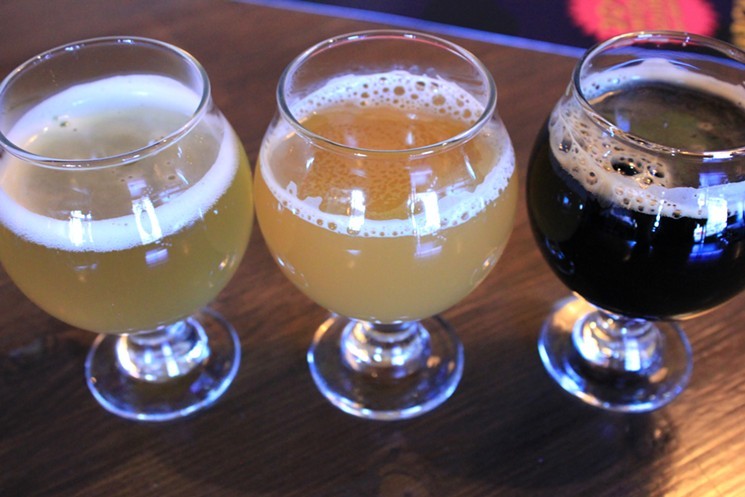 Three tastes of beer: grisette, New England IPA, and stout.
Chris Malloy
The Wandering Tortoise Pours a Magical Lineup of Craft Brews
(2417 East Indian School Road, Phoenix)
The Wandering Tortoise opened in December 2016. At the craft-beer bar, the driving philosophy is taste. Owners Shay Gau and Justin Evans maintain a tightly curated menu that evolves with the beer seasons, with the days of the week, even with the hours. "Our only goal is the best beer we can get," Gau says. And the beer tends to be exceptional. Regular metro Phoenix breweries include Helton, 12 West, McFate, Wren House, Arizona Wilderness, and a few others. The Tortoise will often pluck a few kegs or cans that you won't see elsewhere in the Valley. The bar just started carrying beer from Cigar City, a Tampa Bay brewery with something of a national following. Gau and Evans opened The Wandering Tortoise in December 2016. 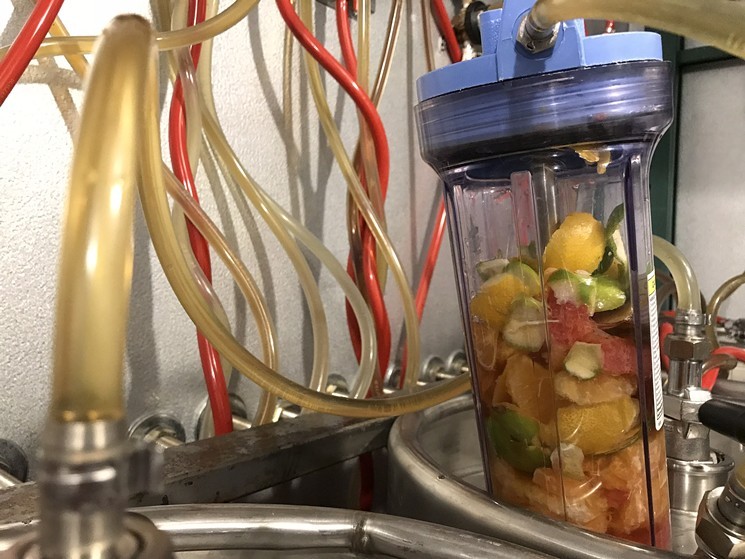 The Randall
Eric Walters
The Shop Beer Co. in Tempe Has Been Infusing Some Wild House-Brewed Beers
(922 West First Street, Tempe)
The folks at The Shop Beer Co. in Tempe wondered what would happen if they made a Double IPA with herbs, garlic, crushed red pepper, dried onion, sea salt, and black pepper. So they made one and called it The Bradbury. Making a large batch of beer with such wild ingredients is a risk. Enter the Randall. Originally devised by Sam Calagione, craft beer pioneer and founder of Dogfish Head Brewery in Delaware, the Randall is a small filtration system that allows brewers to infuse an already made batch of beer with fresh ingredients of their choosing. A small container holds these ingredients. The base beer is drawn through the container, letting the ingredients infuse the beer, which creates a new beer. That new beer is then lined directly into a tap, where it can be poured. The Randall-made beer on tap at The Shop Beer Co. changes weekly, with a new flavor introduced every Wednesday at 5 p.m.