Finding a Feast in the Desert: Tamara Stanger of Helio Basin Rocking Out Arizona Cuisine 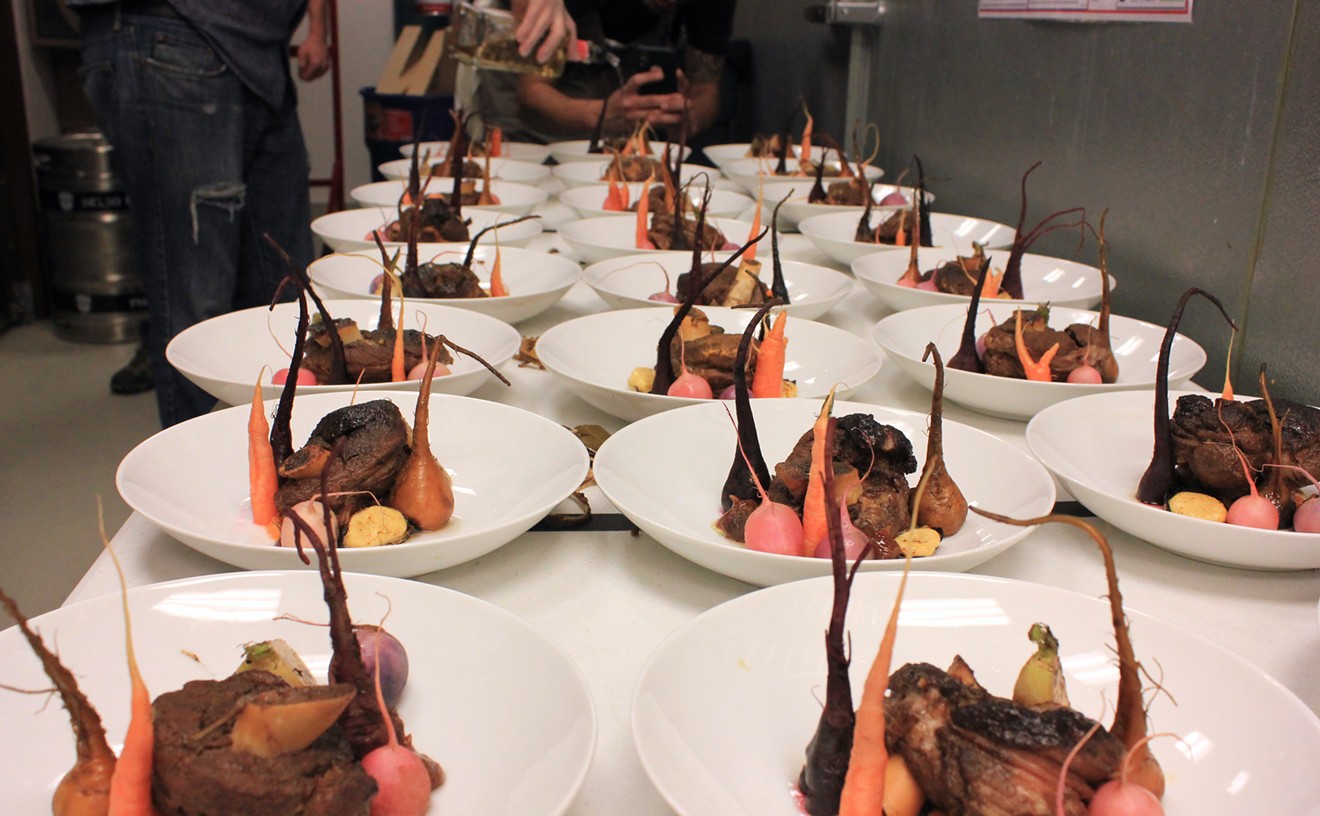 Chris Malloy
Goat osso bucco and root vegetables
Desert flowers line a burlap runner down the center of a long table. More than two dozen diners crowd the table, their chatter thick, their camera phones at the ready, their pale ales and hoppy ambers sinking lower into their glasses with each sip. A sudden hush spreads. A new course is coming. Tamara Stanger, chef at Helio Basin Brewing Company, takes the microphone at the table’s head.

She speaks about the new course, the third of her spring equinox dinner. Stanger is a cook who spotlights the wild bounty of the desert, the pinion sap and the mesquite pods. Not many local chefs do. Her equinox dinners are where she best shines a hard light on them.

Plates start to land in front of the table’s 27 diners. Stanger sets one before a man with white hair. “I’ve never heard of a wolfberry,” he says. “What is it?”

“It’s a berry that grows in the desert,” she answers. She treats her guest to more details, comparing the wolfberry to others more likely to be found in a refrigerated store.

Her day begins 12 hours before dinner starts,  searching for wolfberries in the wild.

She combs the desert five minutes from the brewery, hiking through brush and russet soil, wearing a light black coat and heavy boots. She carries a basket, scissors, and containers for storing foraged ingredients. Stanger’s biannual equinox dinners highlight the new season's foraged ingredients. She held equinox dinners in spring and fall 2017. She needs a few last pieces for the night's spring 2018 meal.

Stanger harvesting some of the desert's bounty
Chris Malloy
“I’m going to check on some wolfberries over here,” she says, raising her gaze to an unseen place across rocky soil, land broken with plants to a distant road. “They should be ready.”

Five minutes later, she finds the shaggy plant. Spade-shaped leaves fill its branches. But the wolfberries aren’t ready yet; they need a few more days.

That's okay, Stanger said. She had dried some from last year. The foraging continues. Stanger eyes each plant cluster, looking for wild shapes to cook.

Stanger philosophizes as she walks. “The reason we aren’t recognized as a major food city is because we don’t have an identity,” she says. “Nobody knows what Arizona food is.”

Without anger, she cites the Valley’s population of transplants as a reason Arizona never develops its own cuisine. “It just kind of clouds what is actually Arizona, and that’s indigenous foods,” she says.

Stanger herself is a transplant. She grew up in a Utah mining town of 20 people. As a kid, she used to explore abandoned mining shafts, walking down into the earth. The giant silences of the Utah mountains remind her of the silences of the Arizona desert.

The silence breaks as she stoops to cut brittlebrush flowers, scissors snipping wiry creosote branches from their trees. She speaks about that night's six-course dinner, and slowly her basket fills. The second course is a salad of local greens. Wild radishes and Queen Creek Olive Mill olive purée channel the land. So do Lion’s Mane mushrooms, urban-foraged dates, and pickled cholla cactus buds. These buds have been eaten in Arizona for a long time. Some celebrate their coming as others would the onset of tomato season, or the holidays. Pickled, they look a cross between a date and a tiny pinecone.

The first three courses of Stanger’s dinner show that she cooks in a uniquely Arizonan tradition. Many cuisines reach peaks in the Valley, cuisines like Mexican, Mexican-American, pizza, new American, and barbecue, each carrying an Arizona influence of varying degree. Stanger is the rare chef who embraces not only ingredients raised on Arizona farms, but ingredients that have grown wild here for centuries — the edible life of the desert, the weird stalks and pods you see as you walk your dog.

Stanger isn't the first to use these vitally Arizona foods. The tradition of eating wild forage of the desert stretches back into prehistory. Though the Native Americans of the Valley were known for growing squash, corn, and other crops in soil fertilized by the Salt River, they also went into the desert for food: cactus fruit, mesquite pods, wild game, and lots more.

Some of the most ambitious desert foragers don't cook in restaurants. Mark Lewis of Chmachyakyakya, a stand at the Old Town Farmer's Market, knows an incredible range of edible desert plants. At his stand in March, he served mesquite tortillas with peppergrass and wild horseradish. He is so adept with Sonoran plants that he forages them in Old Town alleys.

And so Stanger cooks in this vein. She uses cactus buds and fruit, Arizona deer and wolfberries, heirloom corn and juniper ash. She just started down this desert trail last year, meaning she’s just getting going.

Twenty-seven diners got down with desert ingredients.
Chris Malloy
Her first deep encounter with all of this was in early 2017. The spark was Stanger’s introduction to Monika Woolsey, a local champion of Arizona ingredients like mesquite flour.

“She was the one who convinced me to do the equinox dinner,” Stanger says. “She talked to a lot of chefs, but nobody was interested. I loved the idea.” Woolsey passed away last year, shortly after catalyzing Stanger’s passion for desert ingredients.

Helio Basin owners Dustin Hazer and Mike Conley hired Stanger, in part because of her style, to be chef when they opened in 2016. Stanger’s cooking had long been southwestern and rooted in place, even before she met Woolsey.

As the fourth dish goes out, Hazer, head brewer, takes the mic. He talks about the dinner’s fourth beer: a porter. Hazer and Stanger have paired a Helio Basin beer with each course.

The fourth course is smoked Chula Seafood tuna. The tuna has a husk almost as intense as Texas-style brisket. Stanger cured the tuna in pinion sap before smoking it. Lamb pancetta, blood orange curd, corn “mush” made from heirloom pink corn, succotash made with tepary beans, and a leafy crown of sorrel and chervil surround the tuna.

All components are local. Some, like the corn, come from Ramona Farms, where, on the Gila River Reservation, ancient Sonoran crops are raised.

Chula Seafood tuna, smoked and surrounded.
Chris Malloy
Juniper ash speckles the tuna and white porcelain. The ash is created, Stanger says, by taking juniper and “burning the shit out of it.” She says juniper ash was a source of calcium to bygone natives.

Dish five is goat osso bucco flambéed with tequila. There is apricot butter and a ring of vegetables around the darkly roasted shank: purple radishes, carrots, charred onion petals stuffed with gouda, turnips with a hard sear, a rainbow of purple and pink colors. Some have been smoked over hickory.

Stanger follows the dish out to the long table, making an appearance to address the 27 diners. While she’s gone from the kitchen, a server tastes from an extra slice of dessert. His eyes widen. “Our chef has a spark of insanity that’s just what you need in a good chef,” he proudly says. Barrel cactus semifreddo for dessert
Chris Malloy
The dessert is semifreddo, an Italian dish related to ice cream. Stanger made it with barrel cactus fruit; this topaz-yellow fruit tastes citrusy and tropical, almost like pineapple. You can see black seeds in thick cuts of semifreddo that Stanger started to plate.

She arranges the pearly slabs on her grandmother’s mismatched china. On them go "crumb" made from pink corn and dehydrated strawberry, syrup made from Arizona Sake, candied mulberry, pepper meringue, and a few yellow petals. But under the china – under the china and on another dish she lays coils of creosote from the desert that morning. Stanger tucks shards of dry ice into branches. The ice smokes. A new smell mixes with the smells of the kitchen.

Stanger has planted an incognito violinist at the table. He stands and play western-sounding tunes during dessert. She has tucked dry ice into the creosote to recreate, for diners, as they dig into semifreddo flavored with cactus fruit, the smell of desert rain.

The last course goes out the kitchen doors.