Rosalie O'Connor for Ballet Arizona
Director Ib Andersen.
Looking to make your Cinco de Mayo a little more interesting? This week you can choose to have your Cinco on the May 6 at the Cinco de Mayo Phoenix Festival or choose to spend it with rosé and '90s Mario Lopez. For more things to do, visit Phoenix New Times' calendar.

All Balanchine 2018
George Balanchine — who, among many things, was the longtime artistic director and main choreographer at the New York City Ballet — is such a crucial figure in contemporary ballet that only a few directors are authorized through the Balanchine Trust to stage his work. Ib Andersen, Ballet Arizona’s artistic director, is one of them. At All Balanchine 2018, he presents three works by the Russian-born dance master: “Prodigal Son,” “Symphony in Three Movements,” and “La Sonnambula.” The first is a dramatic piece and was Balanchine’s last work for Ballet Russes; it premiered in 1929.

The award-winning local company pays tribute to the legend at 7 p.m. on Thursday, May 3, at Phoenix Symphony Hall, 75 North Second Street. Tickets are $25 to $159, and performances continue through May 6. Visit the Ballet Arizona website. Amy Young

RuPaul’s Drag Race
We’re now in double-digit seasons of RuPaul’s Drag Race, and no one is complaining. For a place to view the race, visit Kobalt Bar, 3110 North Central Avenue, #125, on Thursday, May 3.

Aside from karaoke and cocktail specials, Kobalt is known for its video lounge — meaning there are numerous speakers and TV screens so you can see Miz Cracker’s flawless makeup and hear everything Eureka has to say (not that you’d have any trouble).

WTF (Women, Trans, and Femme) Maker Night
WTF (Women, Trans, and Femme) Maker Night celebrates the power of women — and the things they create, whether it’s a chocolate chip cookie or computer software. Which is why the monthly series brings together artists, scientists, engineers, and designers within the Phoenix community to collaborate in the making of creative and critical work, with materials and tools provided.

Silence! began as musical in 2002 and has since expanded to several productions, including an off-Broadway run at Theatre 80 and Elektra Theatre.

The Stray Cat production is directed by Louis Farber and runs from Friday, May 4, when showtime is 8 p.m., through Saturday, May 19, at the Tempe Center for the Arts Studio, 700 West Rio Salado Parkway. Tickets range from $30 to $40. For more information, visit the Stray Cat Theatre website.? Tanner Stechnij

Ken Jeong
Ask a parent if they’d prefer their kid grow up to be a doctor or a comedian, and they’ll most likely choose the former. One can do both, however. Ken Jeong proved that. He became a medical doctor in the mid-’90s while simultaneously honing his comedic chops. The sharp-witted and sarcastic comic started taking on some TV roles and really got on the world’s radar in the first — and subsequent — Hangover movies. That same year, he started a several-season role on NBC’s Community.

Ultimately, he ditched medicine for humorous performances. And you can expect that his stand-up show will have you in stitches at 10 p.m. on Friday, May 4, at Stand Up Live, 50 West Jefferson Street.

This is Happening!
Time to get hella spiritual. On Friday, May 4, from to midnight, Walter Productions will host This is Happening!, an event centered on dance, community, and good vibes at 747 West Roosevelt Street.

The soundtrack for the night will be curated by Human Experience and Secret Sessions. Other elements of the event will include sound bowl healing with Natalie Anne Hewitt, a Thai massage workshop with Jeremy W. Troughton, an interactive art installation created by Jonathan Luther, a tea lounge hosted by Shannon Stapleton, and a guided intention-setting ceremony with Kate Swarm.

All you need to bring is a ticket and good vibes. Admission is $30 in advance and $35 at the door. For more information, visit the This is website. Lindsay Roberts 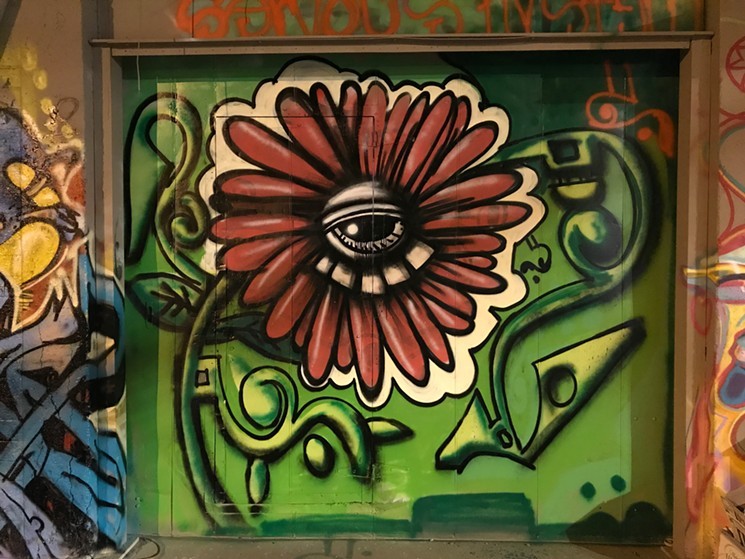 Sampling of street art spotted at Unexpected Art Gallery.
Photo: Lynn Trimble
Phoenix Mural Festival
Phoenix is already home to an impressive array of street art. But you can see about 50 new murals get painted during the Phoenix Mural Festival, a three-day affair that launches on Friday, May 4, at Unexpected Art Gallery, 734 West Polk Street. Several participating artists will be there from 6 to 10 p.m., with work on view and for sale. It’s a rare chance to meet them — and talk with them about their mural plans and larger bodies of work.

You can find specific locations on the festival website, or just start exploring in areas where several artists will be working — including the Willo neighborhood, Grand Avenue, and Roosevelt Row. Visit the Phoenix Mural Festival website. Lynn Trimble

Phoenix Rising v. L.A. Galaxy
As some of the Valley’s more stalwart sports franchises regroup after disappointing seasons and set their sites on pivotal offseason decisions, it’s business as usual for the Valley’s youngest franchise. Despite being the new kids in town, Phoenix Rising have already displayed more stability, professionalism, and success than some of their more tenured counterparts. In just a few short years, the Valley’s top soccer squad has been both efficient and aggressive in building a formidable roster, netting a rabid fan base along the way.

Science with a Twist
Nerd worlds collide on Friday, May 4, when Arizona Science Center hosts Science with a Twist. The monthly grown-up gathering at the museum blends a cash bar with pop culture pursuits, and this month, the hosts are going wide for Star Wars Day. Programming will include Star Trek, Star Wars, and Doctor Who references, with a time-warp to “Pompeii: The Exhibition” and a light-speed tour of the galaxy in the planetarium. Naturally, there will be themed cocktails, too. But we wouldn’t encourage experimenting with what happens when you mix your “Make It So” Margarita with a Sonic Screwdriver. We’d rather you live long and prosper.

Jedi cosplay is encouraged, and things get geeky starting at 6 p.m. at 600 East Washington Street. Tickets are $12 for nonmembers and free for members. “Pompeii” costs $11.95 extra for , while members pay an extra $9.95. See the Arizona Science Center website or call 602-716-2000. Becky Bartkowski

Derby Day Club
Since the Kentucky Derby began in 1875, every first Saturday in May has brought with it the “most exciting two minutes in sports.” And a taste of the Kentucky Derby, which encompasses a full day of horse races, is making its way back to Turf Paradise for the third annual Derby Day Club. Attendees can expect everything from the bougie hats to sitting out by the racing track. The all-day affair is the only party in Arizona that will host live races, betting terminals, a host bar, and special lounging.