Much More Than a GIF, Upgrade’s Betty Gabriel Is Ready to Work

Courtesy of Neon
Betty Gabriel, who is set to costar in the summer action film Upgrade, says, “I still feel like my carriage is going to turn back into a pumpkin.”
Betty Gabriel trained at Juilliard, has enjoyed a fruitful career on the stage, is set to costar in a summer action film, and stole key scenes in last year’s Get Out. But for all that, Gabriel might be more well-known now as a GIF than an actor.

Because one pivotal Get Out close-up displays Gabriel’s astounding emotional range in just three seconds, the actor’s face has become memorialized in GIF-dom. Even if you don’t know Gabriel’s name or haven’t caught her stunning performance in the film, you’ve likely seen the single tear eking out from her eye as she shakes her head, “No. No-no-no-no-no.”

Of course, that moment — a woman saying no while still forced to smile, to pretend everything is fine — has seized the attention of so many. It may speak for millions, but Gabriel’s not yet what Hollywood thinks of as famous. Yes, her contribution to Jordan Peele’s hit got her a spot on the red carpet at the Oscars, where she drew attention for her form-fitting princess gown, but Gabriel also wants you to know that her heeled shoe was snapping into a flip-flop, and her elegant dress seemed to be saying to her, “I don’t want to stay on your body.” After Get Out hit, she received a text from her mother saying that the actor should think about getting a private jet. “Like Morgan Freeman,” Gabriel laughs, recalling her mother’s reasoning. “So I won’t be harassed by all my adoring fans at the airport.”

The cast of Westworld in Season 2 includes (from left): Betty Gabriel, Luke Hemsworth, Gustaf Skarsgard and Jeffrey Wright.
John P. Johnson/HBO
Gabriel jumped from stage to screen with a role in B-movie breakout Beyond Skyline in 2017. Costar Frank Grillo recommended her to Blumhouse pictures for the part of Laney, a nerves-of-steel EMT in The Purge: Election Year. That, in turn, landed her the audition for Get Out and a part as righteous detective Cortez in Leigh Whannell’s upcoming sci-fi action film Upgrade (in theaters next month) — starring Logan Marshall-Green as a man who’s implanted with technology that makes his body a killing machine. This year, Gabriel’s also returning to television since the cancellation of fan-favorite Good Girls Revolt, with a role as a security expert tasked with quelling the robot rebellion on Westworld.

So it’s all going well, right?

“I still feel like my carriage is going to turn back into a pumpkin,” she tells me on the phone from Europe, where she’s shooting Counterpart, a Starz show with a cast she’s joined for the second season. Over the phone, I can hear a chorus of tweeting birds in the background, like she really is walking through a princess wonderland. “I just want to do a good job,” she says. “Counterpart is the biggest role that I’ve had to date. [Get Out’s] Georgina was a big role, but not on the page.”

Gabriel exudes humility, but there’s a reason for that: “I just look around and see my hooptie of a car. I’m humble, because I live quite humbly. I’m not making millions here, and because I’m a Capricorn,” she says wryly, “I save up. You have to save for winter.”

By “winter,” she means those “cold months” an actor must endure in between jobs, auditioning relentlessly, wondering if she’ll be in this industry much longer. “I do sometimes think, ‘Five years from now, 10 years from now, am I still gonna be acting?’ I dunno! I hope so.”

For fans of Gabriel’s work, that’s a sobering thought, that someone so adored — maybe not yet quite Morgan Freeman-in-a-private-jet adored — would be contemplating whether it’s possible even to stay in this business, but that uncertainty she’s expressing isn’t all that uncommon. When she started in the industry, her biggest hope was maybe to play a detective on a procedural. I tell her it seems that’s where a lot of black women actors land, playing the killjoy authority figure. She says she could be happy with that, because she inevitably makes the most out of every role. 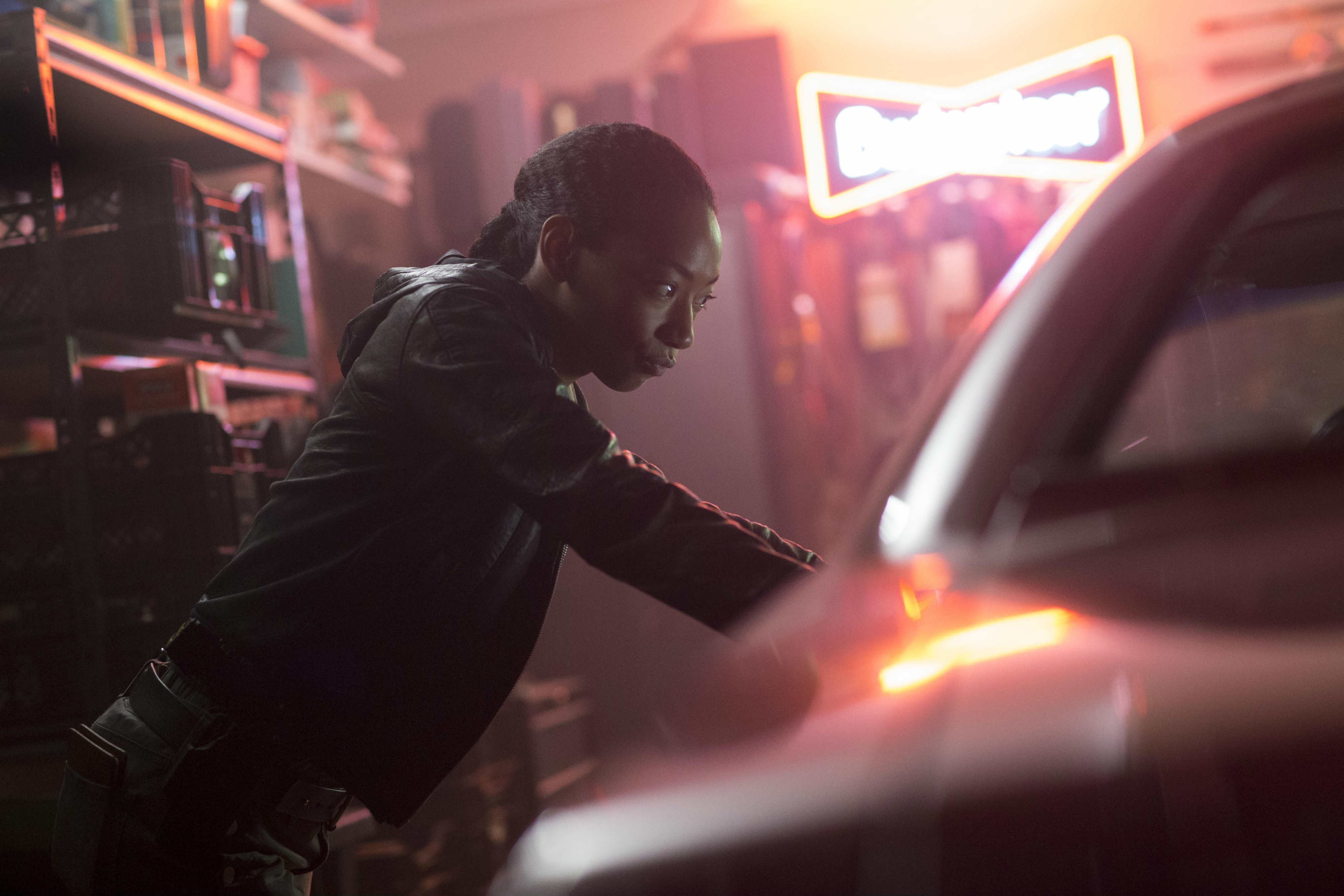 Betty Gabriel plays righteous detective Cortez in Leigh Whannell’s upcoming sci-fi action film Upgrade.
Courtesy of Neon
“I think that as kids we all picture ourselves as the princess, the prince, and not really ever as the housekeeper or the comical alpaca or llama or what have you — the sidekick. But as an adult, I’m such a huge fan of people who are funny and people who are, in very brief moments, able to do something that you would never think is possible.” She watched Jumanji on her day off and now praises Jack Black’s sidekick abilities. And working with Stephen Root on Get Out was a dream because, to her, he stole Office Space.

Even if Gabriel only ever played the “alpaca,” the movies would be better for it, as there’s startlingly few versatile female character actors getting work today, let alone African-American ones. But Gabriel may want more, even if it takes a lot of pulling teeth to get her to admit it.

“I sometimes think I would love to be the superhero, like Danai [Gurira] in Black Panther,” she says. “For me, though, it would be Red Sonja. I like to be very physical — any sort of fight sequence is a dream to me. But there are so many worlds that I want to occupy.” A former modern dancer who’s honed the physicality of her performances, Gabriel reiterates that she’s not asking for much — she just wants a great writer and director to work with and a “couple of lines.” But the conversation keeps coming back to what she most hopes to play, characters who possess what she calls the “animal within the human being.”

Gabriel points to the role of Inez in Stephen Adly Guirgis’ play Our Lady of 121st Street, a part she played in a showcase in Chicago. “There’s a scene where Inez just goes off on this character Rooftop — ‘You turned my heart into a motherfucking graveyard!’ — just goes in on him, and that was quite a moment.” She yearns to “let loose” onscreen the way she could in the theater. She’s contemplated what a standalone Georgina movie might look like. She’s already explored the Get Out character thoroughly in her preparation for the role, wherein she applied the method acting technique of discovering who Georgina was in her “private moments,” mentally penning unspoken soliloquies and monologues Georgina would say if she were alone.

Fans, I’m sure, would be interested in a Georgina film, but Gabriel knows that preparing for winter means not counting your chickens before they’ve hatched. She simply wants to work, hard. Her favorite thing, she says, is seeing a bruise show up on her arm after she’s just done a series of intense physical takes, seeing the evidence that she has put blood, sweat and tears into the performance. Betty Gabriel may not be always comfortable with the responsibilities of her growing fame — red carpets and junkets and interviews and tending to social media — but she’s certainly ready to work.

“It’s true what they say,” she says. “You have to be a little crazy to do this job, but those few moments where you feel like you’ve done something real and potent and visceral, that makes it all worth it.”