Here to be Heard: The Story of The Slits Takes a Look Back at Punk Herstory 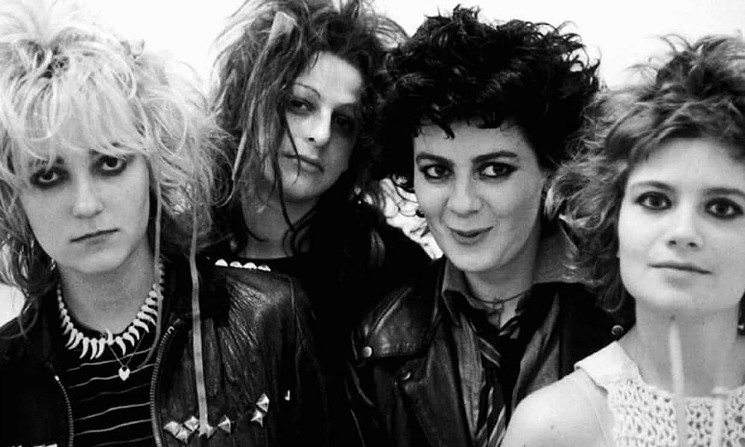 Early on in William Bagley’s Here to Be Heard: The Story of The Slits, an off-camera voice reflects on what the female punk pioneers were all about. “Rock 'n' roll is about men rebelling against their mums, and The Slits used rock 'n' roll to rebel against everything.” From their infamous mud-splattered debut album cover to archival footage of them changing on the street or taking a piss on the side of the road, The Slits were a group that had no time for the social niceties or primness that their mums and society tried to foist on them as “typical girls.” They were too busy fucking shit up.

For so long, the narrative of the history of punk has been dominated by men. The Ramones, The Sex Pistols, and The Clash get hailed time and time again as the saviors of “real rock," while their fiercely creative female peers get the short end of the retrospective stick. Books like Jenn Pelly’s essential 33 1/3 volume on The Raincoats, and memoirs by musicians like Throbbing Gristle’s Cosey Fanni Tutti, and The Slits’ Viv Albertine, are helping to correct this imbalance by putting women back in that history, and pointing out how they were pushing the sonic and aesthetic envelope just as hard as their male contemporaries (and in some cases outclassed them completely).

The women in The Slits were among English punk’s wildest and most adventurous musicians, creating a distinctive style that mixed punk’s naked aggression with reggae rhythms. A good chunk of Bagley’s documentary pays tribute to The Slits’ status as genre-blending innovators, establishing how singer Ari Up’s love of reggae led the band to embrace world music, and dub techniques that gave Slits records like Cut and Return of the Giant Slits their rubbery, chicken-scratch sound.

Slits bassist Tessa Pollitt acts as the documentary’s focal point. Dusting off a fragile scrapbook full of Slits press clippings and ephemera, Tessa’s trip down memory lane lays down tracks for the film to follow. We find out about the band’s early tours, their time with original drummer Palmolive, and the frequent blowback they experienced from people in their own community for being women who dared to rock. In one particularly haunting aside, the band admits to feeling a crushing disappointment when they started attending reggae events, and realized that the men who made this bold new sound they loved were just as misogynistic and regressive as all the other dudes in their scene.

“If people expect the worst of you, you kind of give it,” Slits guitarist Viv Albertine recalls ruefully. That’s a side of The Slits that the film delights in showing: capturing the fun they had together, and their willingness to tell everyone around them to fuck off. Albertine, along with Palmolive (who would leave The Slits to briefly drum for The Raincoats), is one of the most compelling talking heads in the film. Both women talk about their time in the band with fondness while not lapsing into nostalgia.

Where Here to be Heard really excels is in its use of archival footage. Using Super 8 footage from scene veteran Don Letts (who was at one time one of the band’s 13 managers), along with other film clips shot at The Roxy Club, the film gives a sense of what it was like to live in that exciting time. Watching The Slits just be themselves is way more interesting than hearing people talk about them (even if some of the interviewed experts, like journalist Vivien Goldman, are fascinating folks in their own right).

The problem with the film is that it feels so … general. While it paints a clear arc of the band’s career, it leaves a lot of blank space. For one thing, we never get a sense of who any of the members were before they became The Slits (this is one area where Pelly’s Raincoats book shines: We come to understand who they are as individuals, and what would drive them to form The Raincoats before they ever meet each other). When the band breaks up after the poor reception the public gave Return of the Giants Slits, the film barely explains why. Was it intra-band strife? Frustration with their lack of success? Some other reason? And when Ari Up and Tessa decide to reform the band, the film doesn’t explain why Viv Albertine declines to go along.

It also leaves out interesting tidbits like the fact that Ari Up’s mother married John Lydon, making The Slits singer the stepdaughter of Lydon. Considering how Rotten and The Sex Pistols get brought up a lot during the film, it’s weird that this bit of strange personal history gets completely overlooked. We also don’t find out how drummer Budgie joined the band for Cut, or very much at all about how that classic record came together.

The film offers glimpses of interesting narrative detours it could take (like the band touring with Don Cherry, and having his stepdaughter Neneh working with them as a singer) but barely does anything with them. Here to Be Heard serves as a necessary and welcome introduction to The Slits, but fails to give us a deeper understanding of who these women were. And perhaps it’s wrong to expect a film that barely clocks an hour and a half to offer the kind of deep, substantive information that books like Albertine’s memoir, and Zoe Street Howe's Typical Girls? The Story of the Slits do, but I was still left craving more details, more anecdotes, more herstory.

Here To Be Heard is screening for one night only at FilmBar on Sunday, May 20. A portion of the proceeds from the screening will go to benefit Girls Rock! Phoenix. Tickets are available via FilmBar.