Lauren Cusimano
Underground is the only way.
Baby, it’s hot outside. And if you need a break from the ever-shining sunball and plenty of alcohol to go along with it, we’ve got a cold, dark suggestions for you: basement bars. The Valley has more than a few basement bars for you to hole up in, some coming with raucous dance parties and spooky yet fascinating early Arizona history, while others offer tiki favorites, delectable seafood, and lengthy wine lists.

Here are nine basement bars to find yourself in across metro Phoenix this summer.

50 East Adams Street
The Renaissance Phoenix Downtown Hotel basement is home to Melinda's Alley — a spooky little joint open about eight hours a week between Friday and Saturday nights. Opened in 2016, the hotel speakeasy is named for Malinda “Malindy” Curtis – a well-known, downtown Phoenix resident who died in 1910 and is said to still “linger” in the area. In fact, you can spot the alleyway entrance by the 70-foot Hugo Medina and Darrin Armijo-Wardle mural aptly named “Malinda” (yes, the spellings are different). In any case, the bar itself is encased by the original foundation of the 1910-destroyed Adams Hotel, and has a very stripped-down cocktail menu. It changes weekly, so you’ll just have to find out what you’re drinking when you get there. 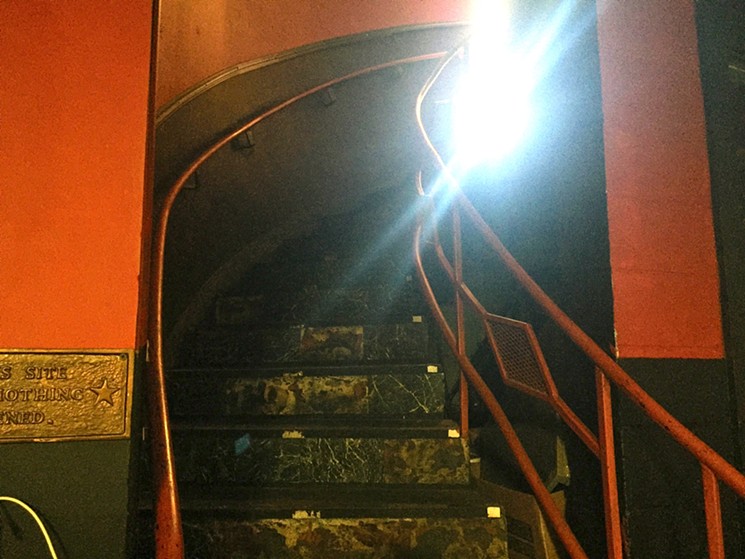 The Bunker at Aguila’s Hideaway in Avondale was built as a bomb shelter in 1959.
Lauren Cusimano

1235 North Dysart Road, Avondale
Know before you go: Aguila's Hideaway is nestled behind Dysart Liquor in Avondale, and was once Wendy Jack’s Hideaway, and just Hideaway. This historic establishment was built as a bomb shelter in 1959 and opened in 1962 as an underground bar what was then a dry city. An above-ground bar and kitchen were built in 2006, but the renovated underground part is now The Bunker. It’s a bar and, at times, a nightclub, but overall just a cool place to be. 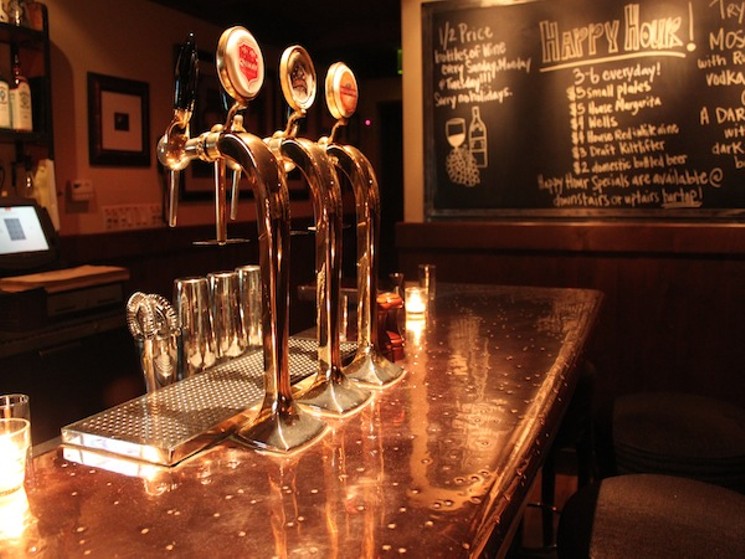 Rokerij has your subterranean wine list on lock.
Diana Martinez

6335 North 16th Street
A member of the fun Richardson's Restaurants family, Rokerij is nicely laid out beneath the stone house that is Richardson’s. It’s a dim, warm, copper accentuated bar and restaurant found at the bottom of a set of stone steps (be careful if it’s raining). Established in 2000, the Rokerij comes with a full menu of steaks, fish, small plates, and other Southwestern favorites, and quite the wine list. Here it’s happy hour from 3 to 6 p.m. daily, and reverse happy hour is from 9 p.m. to 2 a.m.

550 North Hayden Road, Scottsdale
With the tagline “Arizona's Only Underground Restaurant,” the Salt Cellar Restaurant is one of the better-known seafood establishments in the Valley (those buttery mussels, so help us). And you better believe there’s a bar down there, too. In fact, there are kind of two. Down the wood-paneled stairs you go to the hostess area, neighbored by a short, slightly skylight-lit bar where you may enjoy entrees and drinks beneath a giant swordfish. Go deeper into the restaurant for the darker, official bar for TVs, more cocktails, and first access to the bartender.

235 North Country Club Drive, Mesa
Visiting Sun Devil Liquors & Cellar Pub is like an adventure. Enter the massive Mesa liquor store packed with colorful bottles and keep going till you see the neon sign directing you to the Cellar Pub. The basement is loaded with wine bottles, but at the cozy bar or one of the many tables, feel free to order some beer or carry over a glass of wine. Little known fact: This place is a sister store to Tempe’s famous Jerry’s Liquors (you’ve seen the sign). 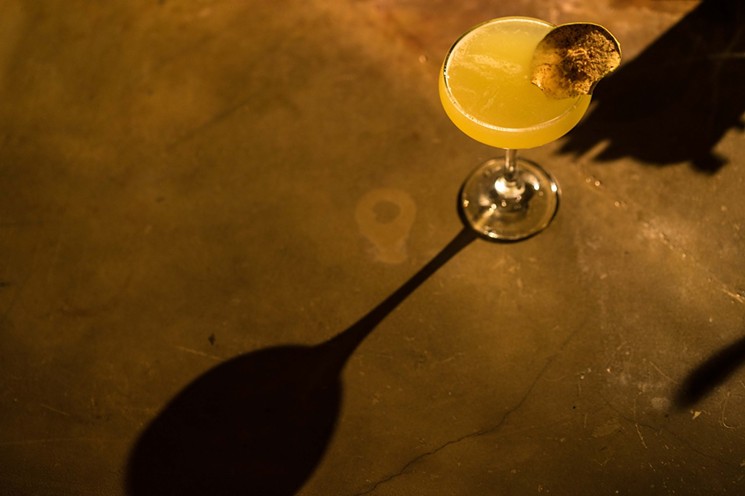 10 North San Marcos Place, Chandler
This subterranean downtown Chandler bar is pretty fun, offering craft cocktails that will make it tricky to get back up those stairs on the south-facing side of Crust Chandler. The space itself was ready for the cocktail bar when it opened in 2015, as The Ostrich is housed in the historic tunnels connecting the golf course clubhouse of the Crowne Plaza San Marcos and the nearby railroad station. It was also a place where ostrich feathers were stored by Dr. AJ Chandler himself. The drinking lounge is dark and almost glowing, with lots of space at the bar where you can watch the bartenders impressively mix and shake your drink order.

3620 East Indian School Road
The Valley isn’t short on tiki-themed basement bars, but no one’s complaining. UnderTow opened in 2016, and probably still sees a line out their underground door. The entrance is found beneath Sip Coffee and Beer Garage in Arcadia —specifically beneath the suspended schooner. Reservations are definitely recommended, and walk-ins are possible if you don't mind a wait. Once seated, you’ll quickly notice this high-end bar is set up to look like the hull of a ship. The menu definitely impresses as well thanks to signature cocktails like Dutchman’s Demise, Oaxacan the Plank, and Ain’t No Bali Hai Enough. 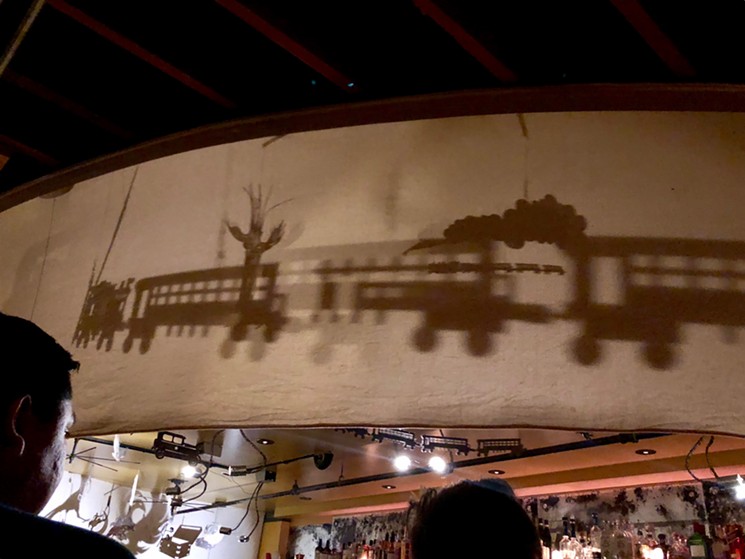 130 North Central Avenue
As you certainly know, Valley Bar is a hip place. There are drinks, dance parties, games, shows, and, of course, a murderous piece of Arizona history told via shadow mobile suspended above the bar. But since the bar's opening in 2015, there’s been one aspect that grabbed people’s attention — this nightlife spot is underground. Enter via the alley and descend down a narrow, dark, steep set of stairs after flashing your ID. It’s never not fun, and those stairs are never easy to climb back up. 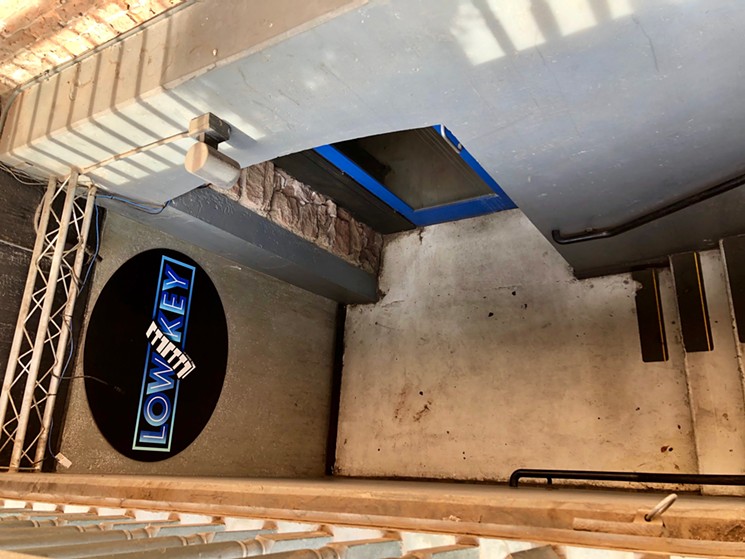 501 South Mill Avenue, Suite B101, Tempe
Opposite its west Valley sibling at Westgate, the Low Key Piano Bar in Tempe is subterranean. Found among the booming bars and clubs of Mill Avenue, Low Key is set beneath the historic Laird and Dines building — currently occupied by Varsity Tavern. Open Tuesday through Saturday night, the dueling piano bar is entered via the descending stairs off Fifth Street and Mill Avenue, and offers everything you'd expect from a dueling piano bar. Think drink specials, requests being shouted all around you, and big Billy Joel and Elton John singalongs.