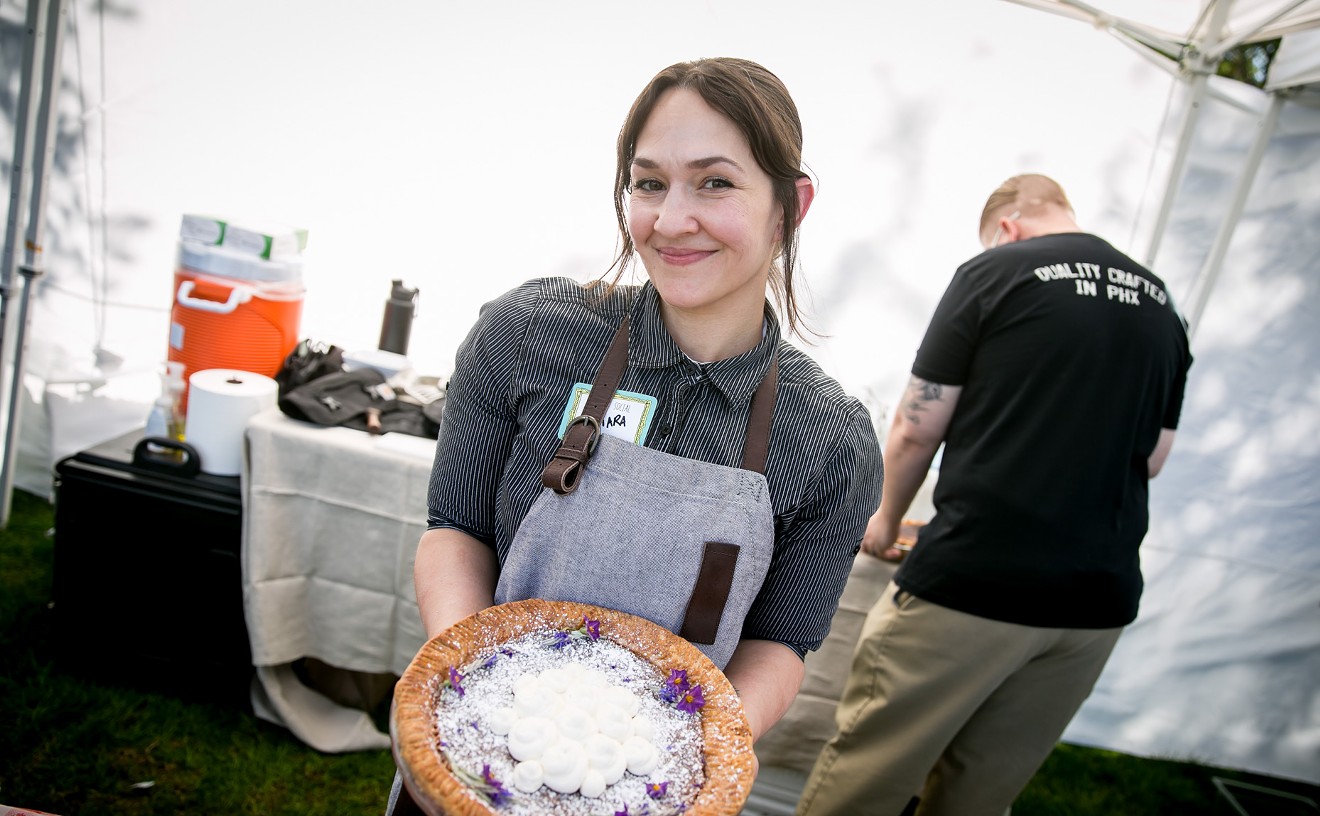 Melissa Fossom
Tamara Stanger with a vinegar pie.
Tamara Stanger is one of the most innovative chefs in the Valley. She has masterminded beer flights paired with ice cream. She has gone into the desert to forage for progressive multicourse dinners. She is using ingredients from the Sonoran to forge a new chapter in the ageless story of Arizona cuisine.

But suddenly, the setting of that chapter has changed.

Stanger's last day at Helio Basin Brewing Company was Sunday. She'll be taking some time off to hang out with family. Later this summer, she'll start as chef at Cotton & Copper.

Cotton & Copper is currently midway through construction. The 50-seat eatery, which Stanger says will be more mixology- than food-focused, will open later this summer in south Tempe, near Tempe Public Market and Ghost Ranch (next up in Aaron Chamberlin's blitz of restaurants). Sean Traynor of Raised by Wolves Hospitality will be overseeing Cotton & Copper. The project will have a strong Arizona focus.

"Cotton & Copper is a craft cocktail public house, for lack of a better word," Stanger says. "It's a place where Sean Traynor, who has been in development with a few craft cocktail places around the city, wants to do something unique, something surprising."

Cocktails will be forward-thinking and use indigenous Arizona ingredients. With Stanger behind the stoves, the food will be in a similar progressive Sonoran vein.

"I'm going to focus on Arizona ingredients," Stanger says. "I don't want the food to be modern. I want to take people back to the turn of the century, when people used food to entertain. I want to go to a simpler style, like with that vinegar pie that I'm known for. It's just five ingredients."

(Her vinegar pie won accolades at our 2017 Pie Social event.)

Stanger expresses deep gratitude to Helio for giving her a shot. "I'm very glad I got an opportunity to grow at Helio," she says. "That was the place where I really blossomed. Without that, I wouldn't be the chef that I am."

At the same time, Stanger is looking forward to the continued development of her cuisine.

"Being a lot smaller, that gives me more opportunity to use more local stuff and seasonal stuff," she says. "I'm probably going to be doing small limited stuff here and there where I'm able to use foraged ingredients."