Sex Offender Exposed Himself to Kids in Mesa for a Year Before Arrest, Police Say

Graham Roberts Drewes hung out regularly near Maple Circle and Dover Street while sitting in the driver's seat of his silver sedan — without his pants on, police allege in court documents. 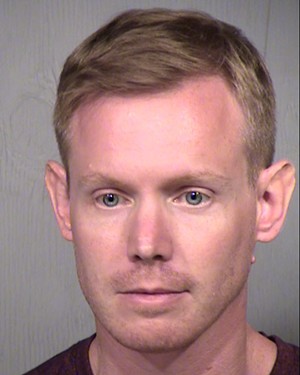 Graham Roberts Drewes, 36.
MCSO.org
Drewes frequented the neighborhood. On December 27, 2017, a 5-year-old girl was walking with her brother near Dover and Maple when a man in a silver sedan blew her a kiss. The child walked up to the car window, only to find Drewes without pants, his genitals exposed, records state. The girls’ brother went to retrieve his sister and caught a glimpse of Drewes, who was naked.

A neighborhood man reportedly followed Drewes and approached his vehicle to find the repeat offender without pants once again, though reports did say he had a towel covering his genitals this time. The man took a photo of Drewes and provided it to Mesa police, who began surveilling Drewes the next day at his Mesa home.

Police arrested Drewes during a traffic stop on June 27 after he left his home and drove to the Mesa neighborhood he was known to haunt. According to court records, police report Drewes admitted to frequenting the Mesa neighborhood with “no legitimate reason.” However, it should be noted all the homes near Drewes’ predatory path were less than one mile from Entz Elementary School.

Drewes is already on lifetime probation as a sex offender and is supposed to avoid all contact with children.

Drewes also has one prior conviction for sexual indecency in Ohio.