Kristin Burns
Dorothy is scheduled to perform on Sunday, July 15, at Crescent Ballroom.
It's the middle of summer and Phoenix is anything but dead. Need some proof? This weekend's bustling live music lineup will back us up.

Even though its hotter than Satan's grundle right now, a full slate of concerts, pool parties, and dance nights will be happening in and around the Valley over the next three days and nights.

Feel free to check our math or just check out our list of the 13 best concerts and music events in Phoenix this weekend.

It's a mix of what the summertime concert season is known for – including tribute acts, nostalgia tours, and famous names – plus some hard-hitting metal shows, a horror-punk gig perfect for Friday the 13th, and even a dance party/music festival out in the desert.

Details about each of these picks can be found below. And for even more music events happening around the Valley this week, check out Phoenix New Times' online concert calendar. 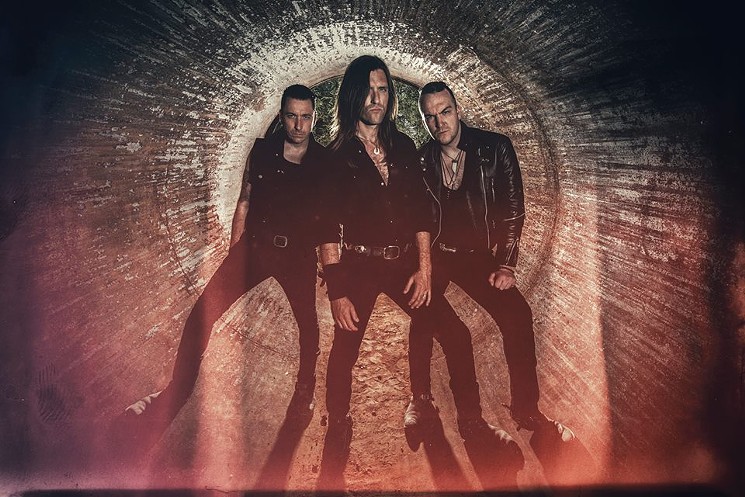 While it's been a spell since their last release (2015's rip-roaring Lust For Sacrilege, which was produced by the legendary Bob Hoag), they've stayed as busy as Beelzebub with other pursuits. Earlier this year, they launched a YouTube series, Va Fanghoul, where they recount the history of classic horror flicks and toys. And they've been playing gigs at haunts both locally and around the world. This weekend, Calabrese will perform a hometown show at The Rebel Lounge, fittingly enough on Friday the 13th. The like-minded ghouls of Zombeast and The Limit Club will open. Darryl Smyers

The six-person band, which includes a lead singer who looks and sounds like Bruno Mars, tries to create an authentic, interactive experience similar to a Mars concert. Fans can expect to hear hit songs as well as deep cuts. Local singer-songwriter Jennie Johnson and the School of Rock Sugar Skulls teen band will open the show. The event starts at 7:30 and tickets are $20 to $35. Laura Latzko

Chuck Negron of Three Dog Night.
Louise Palanker/CC BY-SA 2.0/via Flickr
Happy Together Tour
Friday, July 13
Talking Stick Resort in Scottsdale
Synchronize your watches for the "summer of love" as the annual tour of 1960s throwbacks rolls into the Valley once again for a groovy evening of timeless tunes. The Salt River Grand Ballroom at Scottsdale's Talking Stick Resort will host the show. This year's lineup will include Flo and Eddie of Turtles, Chuck Negron of Three Dog Night fame, rock/pop act Gary Puckett and the Union Gap, Paul Revere and the Raiders singer Mark Lindsay, pop band The Association, and others. Board the nostalgia train starting at 8 p.m. Tickets are $30 to $100. Benjamin Leatherman

Famed EDM producer Steve Bug.
Mirjam Knickriem
Steve Bug
Saturday, July 14
Shady Park in Tempe
You'd be hard-pressed to find a greater authority on house and techno – and the area where these two EDM genres overlap – than Steve Bug. As head honcho of the seminal Berlin imprints Poker Flat, Audiomatique, and Dessous, he's emerged as one of the transatlantic scene's foremost tastemakers since the early '90s.

Of course, Bug is also a seasoned producer with a knack for preserving house and techno's classic essence, while skirting the cutting edge. It's a sonic balance of past, present, and future increasingly reflected in the tendencies of younger producers across the wider international scene, who are reviving classic '90s dance music with modern production value.

Said sounds will flow through Shady Park in Tempe on Saturday night when Bug headlines a night of EDM in the venue's outdoor bar park. Dan Lunsford and Norris Division will open. Doors are at 9 p.m. and tickets are $15. Sean Levisman

Daniel Caesar performing at FORM Arcosanti in May.
Jacob Tyler Dunn
Daniel Caesar
Saturday, July 14
Celebrity Theatre
If you haven’t met Daniel Caesar, don’t worry, you are not alone. In fact, a few people haven’t had the proper chance to meet him. The Canadian-born R&B/soul singer exists in that weird realm where he can craft beautiful, thought-provoking love songs while also sounding genuinely excited about the prospect of love.

Syncing together the moment you put someone on to Daniel Caesar is an A-to-Z type moment. There is the before moment where such a person seems curious. Then there’s the after a minute; that euphoric zip and dash to tell everyone you know about what you just heard. The person who put you on to Daniel Caesar? They’ve immediately shot up your friend list. Had this been 2008, they’d be No. 2 on your MySpace Top 8. It is that serious.

Caesar's music is partially responsible for maybe thousands of those moments. Hundreds of people have circulated “Get You,” 2016's about-perfect single with Kali Uchis. That hundred became thousands and soon millions.

Needless to say, there are many folks in the know about Caesar's music these days, however, probably the same people who were wowed by the singer back in May at FORM Arcosanti and will likely pack his concert at the Celebrity Theatre this weekend. If you want to join them and get clued in, the show starts at 8:30 p.m. on Saturday night. Brandon Caldwell

The members of Weedeater.
Courtesy of Season of Mist
Weedeater
Saturday, July 14
Club Red in Mesa
If you’re looking for a band whose members stay wreathed in reefer smoke and drunk on Jack and Coke, look no further than the storied Weedeater. When it comes to Southern sludge metal, these South Carolina stoners are the real deal. Not only do they play slow, doomy music, but in 2010, lead singer “Dixie” Dave Collins actually shot his big toe off with a shotgun he was cleaning, forcing the to postpone a planned tour and album release.

The band brings the same baked-but-energetic doom energy to its live shows as it does to its recordings, with the added perks of Collins’s intense facial expressions and plenty of aggression from the whole crew. This weekend, they'll be at Club Red in Mesa for a show on Saturday. Metal acts Zeke, Sierra, and Thra will open.
Addison Herron-Wheeler