Civil Rights Corps, based in Washington, D.C., filed a complaint this week in Arizona U.S. District Court after investigating for more than a year. The group began checking into the questionable, money-making relationship between Montgomery's office and Treatment Assessment Screening Center, a nonprofit firm that goes by the acronym TASC, following articles in Phoenix New Times and the Arizona Republic.

"The marijuana diversion program operated by TASC, Inc. and the Maricopa County Attorney's Office represents our two-tiered legal system at its worst," said Civil Rights Corps lead attorney in the case, Dami Animashaun. "Wealthy people buy their way off diversion quickly, while poor people risk being expelled from the program and prosecuted for a felony solely because they cannot afford to pay."

The 40-page complaint (see below) asks the court to certify the case as a class action lawsuit, and award damages to the people allegedly harmed by Montgomery's policies. The complaint details the stories of three of those people, but imply there are many more.

According to Civil Rights Corps, Montgomery, the county, and TASC have been perpetrating a scheme that turns making payments into the most important part of a "drug treatment" program. The diversion program often keeps low-income defendants in the program for twice as long as wealthier defendants, threatening participants with felony prosecution for failing to make relatively small payments. Meanwhile, the prosecutor's office and TASC rake in the millions.

Montgomery inherited the TASC diversion system when he took his job in 2010, and signed a contract with the company in 2016 that updates the arrangement but gives little hint the program provides Montgomery's office with reimbursements of more than $1 million a year. 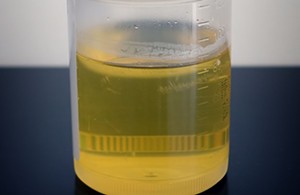 TurboTorque via Wikmedia Commons
After police bust someone for possession of an illegal drug, the TASC scheme begins by misleading defendants about the consequences, the complaint shows. Montgomery's office sends letters to defendants informing that they're subject to jail time if they're prosecuted successfully. However, a 1996 law usually prevents jail time for first- and second-time offenders.

That's what happened to Taja Collier, a 21-year-old African-American woman arrested in October 2016 for cannabis possession, the complaint says. The car she was riding in got pulled over and searched. Police found trace amounts of marijuana in a container in her purse, an amount so small they never bothered to weigh it. Under Arizona's anti-cannabis law, though, any amount can be considered a felony. Medical-marijuana patients are usually immune from prosecution under a 2010 law, but Collier isn't a patient.

She had never been arrested before. Later, in the spring, the county attorney's office sent her a letter offering two choices: She could face felony prosecution with a possibility of spending two years in jail, or enroll in the TASC diversion program.

Collier was forced to quit school at Central Arizona College in Casa Grande to focus on completing the program, which required her to submit to drug testing at a TASC office in Phoenix several times a week. As a part-time worker at Target making minimum wage, she struggled to come up with the $150 entry fee and $15 for each drug test, resorting to frequent donations of blood plasma to make ends meet. She told her TASC case manager about the problems and frequently rescheduled her appointments.

Collier became homeless in September 2017, the complaint says, sleeping in public parks for about a month. Her case manager's response to the news of her troubles: "I am hoping things get better for you. I also noticed that since you are on your FINAL NOTICE, any missed test past this point will result in program termination."

TASC reported to the county attorney's office the next month that Collier had flunked the diversion program because she hadn't submitted to the drug and alcohol tests. The county filed felony charges against her that December. But she was allowed to try TASC again.

She's still in the program, according to the complaint. She owes $667 to TASC before she can leave it. She sent a letter to her case manager on August 17, repeating that she's selling plasma to pay for the program and asking if there was any way she could take the test without paying for it. The case manager wrote back that she had to pay the fees if she wanted the felony dismissed.

As New Times wrote in the 2016 articles referenced in the complaint, TASC has been a cash cow for its founders. In particular, Barbara Zugor, its former CEO, earned between $360,000 and $476,000 per year from 2008 to 2014 alone. Participants in TASC, nearly 80 percent of whom are marijuana offenders, pay up to $1,300 per person for the privilege of enrolling.

As Civil Rights Corps points out in the complaint, the 2016 contract with TASC (which, by the way, expires September 30 of this year) states that Montgomery "at his option" can use money from the program to pay for indigent participants, with indigent defined as someone "who is without sufficient means or ability to provide themselves with adequate food, shelter or social necessaries, and whose income does not exceed 50 percent of the federal poverty guidelines..."

Yet Montgomery and TASC don't reduce or waive fees "for any person, regardless of financial circumstance," the complaint states.

TASC employees interviewed by "investigators for undersigned counsel" reported that reduced fees are reserved for people who can prove they have "basically zero income;" that reductions are "very difficult" and rare; that testing is "strictly fee for service"; and that case managers recommend clients borrow money to complete the program.

Civil Rights Corps' complaint points out that Montgomery was a strong advocate against a legalization measure on Arizona's ballot in 2016, once called a Vietnam veteran at a legalization debate an "enemy," and has "worked to narrow Arizona's medical marijuana laws."

Montgomery began a policy of not commenting to New Times for articles following an article pointing out that he'd tried to distort statistics regarding teenage use of cannabis in the state.