A two-term congresswoman from Tucson, McSally will have to beat back Sinema in November in order to prevent Democrats from flipping a crucial Senate seat.

McSally laced into Sinema in her victory speech. She said that Sinema’s centrist turn is an image makeover.
“She’s a fake production running on a phony script to fool the voters,” McSally said.

But in a statement on her primary victory, Sinema did not mention McSally, and instead invoked the late senator John McCain and his "lifetime of service."

"For all Arizonans, this week has brought a mix of emotions," Sinema said in the campaign release. "As I hear from Arizonans across our state, they tell me they want independent leaders who fight every day to make sure Arizona families can succeed. Arizonans are turning out in record numbers to make their voices heard."

She pledged to spend the next 10 weeks earning their support.

McSally pivoted to the right to secure the Republican nomination, fend off her insurgent rivals, and prove her commitment to President Trump's hardline immigration policies.

Deedra Abboud at a 2017 event for gubernatorial candidate David Garcia.
Gage Skidmore/Flickr
Recent polls show that Sinema has a slight edge over McSally in the general election. Whoever wins will become the first female senator to represent Arizona.

Sinema ran a centrist campaign, pitching herself to voters as a non-ideological pragmatist who prefers getting things done. She harbors fewer liberal policy positions than Abboud, who endorsed single-payer health care and the federal decriminalization of cannabis.

In fact, Sinema has irked left-leaning Arizona Democrats for her voting record. The congresswoman supports Trump's position on legislation more than half the time. Sinema has also refused to endorse abolishing Immigration and Customs Enforcement, and last month voted in favor of a Congressional resolution that expressed support for the agency.

Among the Republicans, the battle to replace retiring Senator Jeff Flake became a contest to prove who was the most Trumpian candidate.

She failed to unseat McCain during a 2016 challenge in which Ward raised questions about McCain's health and age.

Ward was never able to overcome McSally in the polls; many GOP voters viewed McSally as the candidate most likely to beat Sinema in the general election. Moreover, Ward's close ties to the far-right fringe – her supporters include Mike Cernovich and Sebastian Gorka – made establishment Republicans wary.

Over the weekend, Ward stoked outrage after suggesting on Facebook that McCain's family coordinated the release of a statement that said McCain was ending medical treatment to harm her campaign.

Ward gave a listless apology for her remark on Monday, but bristled at questions from reporters in the room. She argued that the media falsely interpreted her comment. 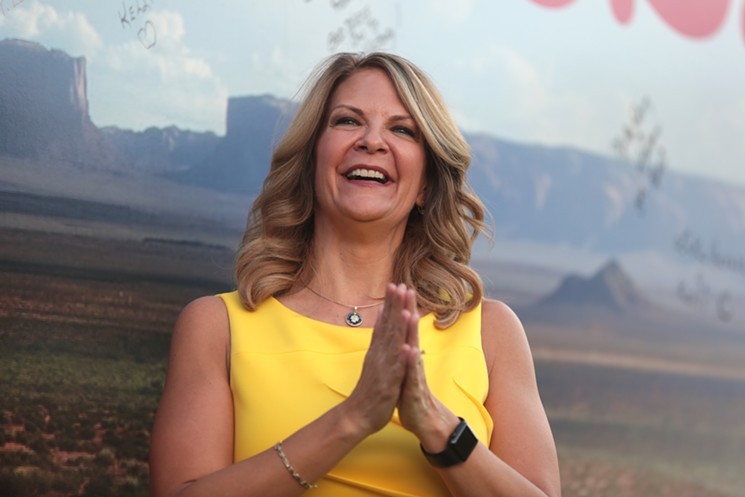 Kelli Ward on the campaign trail in Phoenix on Friday.
Gage Skidmore/Flickr
Arpaio's zombie-like campaign appeared to be one more publicity stunt from the former sheriff, an infamous media hound. From the very beginning, Arpaio trailed McSally and Ward in every poll.

Arpaio was duped in spectacular fashion during his interview with a disguised Sacha Baron Cohen for the comedian's TV show Who is America? And Arpaio refused to answer concrete policy questions, sticking to the well-worn subjects of his record as sheriff and his unwavering support for Trump.

Then, in the last month of the primary race, a pair of former Kelli Ward staffers injected chaos into the Arpaio campaign. Dustin Stockton and Jennifer Lawrence, both Breitbart alumni, were plainly seeking to get even with Ward after an ugly departure from her campaign last fall.

Voters ousted Arpaio in 2016, making his decision to run for Senate bewildering. His 24 years as sheriff were marred by scandal, abuse, and a racial-profiling lawsuit.

If nothing else, Arpaio's doomed Senate bid might serve as the epilogue to his political career.