Courtesy of Liz Ann Hewitt
See dancers perform a crime drama at Tempe Center for the Arts.
Cosplay around at Saboten Con, take a booze cruise to SanTan or check out feminist filmmaking at Les Femmes Underground International Film Festival. For more things to do, visit New Times' calendar.

Wet Hot American Summer
Before Amy Poehler, Bradley Cooper, Paul Rudd, and others were A-list stars, they went to Camp Firewood together in the cult comedy classic Wet Hot American Summer. The movie first aired in 2001, with the players promising they would meet back on the campgrounds 10 years later for a reunion. Instead, they returned for a prequel series, and a second season sequel on Netflix. On Friday, August 31 you can see the hilarious film at the Tempe location of Alamo Drafthouse, 1140 East Baseline Road. You only have one chance and it’s at 7:30 p.m., so bring your can of vegetables and your “” so you can write down your daily thoughts. Tickets are $11.35. Visit the Alamo Drafthouse website. Dillon Rosenblatt

Under the Covers
Tired of watching television crime dramas? Maybe it’s time you checked out a little on-stage forensic action. See how dance intersects with crime-related themes in a full-length dance work called Under the Covers. It’s being presented by Tempe-based choreographer and dancer Liz Ann Hewitt, who studied criminal justice at Arizona State University. Hewitt describes the piece as “the story of two police officers tangled in a web of lies, murder, and deception.” It’s set in a town searching for a missing woman. The piece features cover tunes, and it’s being performed by Phoenix-area dancers. See it Friday, August 31, at 7:30 p.m. It’s being performed at Tempe Center for the Arts, 700 West Rio Salado Parkway. Tickets start at $20. Visit the Tempe Center for the Arts website. Lynn Trimble Cosplaying Hotline Miami at Saboten Con.
Benjamin Leatherman
Saboten Con
The annual Saboten Con this weekend will offer four days of cosplay, Saiyan shenanigans, maid cafes, and other anime-inspired activities. It’s one of the most colorful geek events in the Valley and one helluva fun time for anyone into binge-watching sites like Crunchyroll on the regular.

All that said, the event isn’t just an anime con. “We think of it as more of Japanese pop-cultural convention,” says co-founder Greg Fennell. As such, the weekend-long event will also feature such otaku fun as J-pop concerts, karaoke sessions, imported video games, and other bits of J-culture. There will also be appearances by many special guests, including anime artists like Masami Suda of Fist of the North Star fame, voice actors like J. Michael Tatum, and pro cosplayers like Leon Chiro and Ivy Doomkitty.

Lavell Crawford
CAA
Lavell Crawford
Lavell Crawford has made a name in comedy with his larger-than-life personality and willingness to poke fun at himself. He is best known for playing bodyguard Huell Babineaux on the TV shows Breaking Bad and Better Call Saul, but he’s also appeared as himself or characters on Chelsea Lately, Workaholics, The Ridiculous 6, It’s Always Sunny in Philadelphia, Lopez Tonight, Tosh.0, Last Comic Standing, and The Jamie Foxx Show. The comedian will perform at Stand Up Live, 50 West Jefferson Street, from Friday, August 31, through Sunday, September 2. Shows are at 7:30 p.m. and 10 p.m. Friday, 7 p.m. and 9:30 p.m. Saturday, and 7 p.m. Sunday. Tickets for the 21-and-older show cost $30 for general admission, and the club has a two-drink minimum. For more information, call 480-719-6100 or go to the Stand Up Live website. Laura Latzko

Third Annual Chile Roast
Sure, you can find New Mexican green chile in Phoenix. But if you want to get your hands on an authentic bag of chile straight from the source – Hatch, New Mexico – you’ll need to stop by Chelsea’s Kitchen on Saturday, September 1. The northeast Phoenix restaurant is hosting its Third Annual Chile Roast, with chile courtesy of Young Guns Produce Company, a well-known chile producer in New Mexico’s Hatch Valley. Chelsea’s Kitchen is offering half-off prices on plates that feature green chile, including , burgers, and soup. If that’s not enough chile for you, you can also purchase a five-pound bag to hold you over until next year’s roast. The restaurant is located at 5040 North 40th Street. For more information, visit the Chelsea’s Kitchen website. Joe Flaherty

Disney, but a little dirty.
Courtesy of Pandora Productions
Pandora Productions’ Dirty Disney
Disney movies often have hidden adult Easter eggs, but the movies themselves are never outright salacious. Pandora Productions’ Dirty Disney show will alter your view of beloved childhood films with parodies of songs from The Little Mermaid, The Lion King, Frozen, Hercules, The Jungle Book, Tangled and Mary Poppins. The show will visit the Crescent Ballroom, 308 North Second Avenue, on Saturday, September 1. During the show, returning cast members Pandora DeStrange, Constance Craving, and Olivia Gardens won’t be afraid to get the audience in on the . Doors open at 7 p.m., and the show starts at 8 p.m. Tickets are $15 in advance and $20 at the door. For more information, call 602-716-2222 or go to the Crescent Ballroom website. Laura Latzko 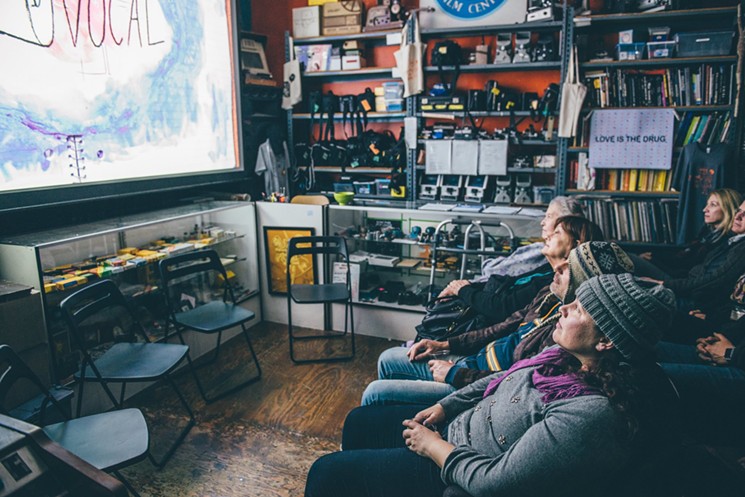 Labor Day Luau Celebration
You don’t have to go on a long plane trip to have a luau experience. On Saturday, September 1, through Monday, September 3, the OdySea Aquarium, 9500 East Via de A-100, will bring a taste of Hawaii to Phoenix as part of its Labor day Luau celebration. Throughout the holiday weekend, the aquarium will have luau music and themed decorations of hibiscus flowers, palm trees, floral garlands, and tiki masks. Each day at 11:15 a.m. and 2:15 p.m. in the Fresh Water Gallery, penguins will take part in a parade. the end, several of the aquatic birds will do the limbo. The event also offers meet-and-greets with Princess Moana, kinetic sand activities, and an animal-themed bingo game. The museum is open 9 a.m. to 8 p.m. Saturdays and 9 a.m. to 6 p.m. Sundays and Mondays. Admission is $37.95 for adults, $35.95 for seniors and military personnel, and $27.95 for children 2 to 12. For more information, call 480-291-8000 or go to the OdySea Aquarium website. Laura Latzko

Bicycle Brews Cruise
If you like beer and bikes you should get jazzed about this Labor Day weekend’s Bicycle Brews Cruise, hosted by SanTan Brewing Company. Why? On Sunday, September 2 at 1 p.m., with a horde of like-minded cyclists all looking to get loose, you will get to travel from place to place, stopping to drink beer. You get one beer at each stop, plus a beer plus a burrito at the starting point, SanTan Uptown Phoenix, 1525 East Bethany Home Road. The destinations that follow are all spacious and thirsty in spirit. They are Cold Beers & Cheeseburgers, Camp Social, and The Vig Uptown. The mobile event costs $25. Rain or shine, there will be no refunds. Visit the SanTan Brewing website. Chris Malloy