Dillon Rosenblatt
The cream cheese frosting perfectly covers the top of this cinnamon roll at Lux Central.
Fall is here. It may not feel like it in Arizona sometimes, but that shouldn't stop you from enjoying the delicious food and drink the season brings. All the best fall eating and drinking seems to share one ingredient that exists purely to bring joy. No, it isn't pumpkin spice — it's cinnamon. Specifically, cinnamon rolls are a delicious treat to enjoy, especially right now.

Jerry Seinfeld puts it perfectly in the Seinfeld episode "The Dinner Party." He says, "People love cinnamon. It should be on tables at restaurants along with salt and pepper. Anytime anyone says, 'Oh, this is so good. What's in it?' the answer invariably comes back: cinnamon. Cinnamon. Again and again."

Cinnamon rolls should be chewy and ultra-soft on the inside, and the frosting should complement this lushness. A perfect balance of the cinnamon in the roll and the sweetness of the frosting is ideal. The roll should be warm. Not hot. That might be the most important part.

These rolls exemplify the perfect pastry. They will all melt in your mouth. Really, what other breakfast delight can make use of all five senses all at once? Here are our five favorites.

4402 North Central Avenue
If you're lucky enough to get one of these babies fresh out of the oven, you will want to go back to Lux Central every day for another. It takes a bit for them to be ready, so sit and relax, maybe drink a coffee or cappuccino while you wait to devour this monstrous cinnamon roll. A fork and knife is definitely necessary for this delicious beast, but feel free to make a mess, too. The stickiness is part of the fun. Warning though, these rolls sell fast, so it's best to show up earlier. 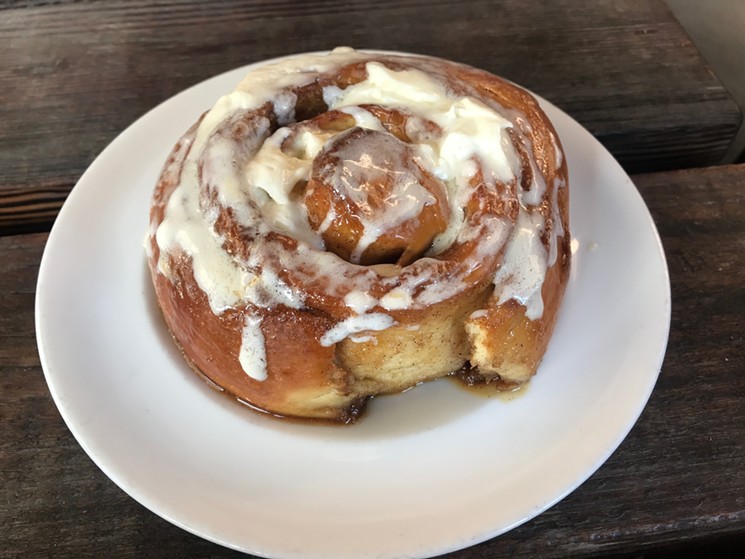 Topped with melted butter, you have the option to spread as much frosting on top of your roll at Phoenix Public Market Cafe.
Dillon Rosenblatt

14 East Pierce Street, Phoenix
The roll from Phoenix Public Market Cafe dials the cinnamon spirit up to a new level. Not only is the roll made with cinnamon in the warm bready part itself, but there's some cinnamon added to the top. The roll comes with the cream cheese frosting on the side, which is good for those who don't want it extra sweet. You can add as much as you'd like, but it will melt almost instantly, so eat fast. This roll is perfect for those who want a little extra kick of cinnamon — and why wouldn't you?

4501 North 32nd Street
At Provision Coffee Bar's flagship location in Arcadia, visitors may hear a shout of glee from vegan patrons. That's because Provision offers a “I can’t believe it’s vegan” cinnamon roll for $5. Baked goods rotate frequently, so be sure to snag one if you see it — or ask a server for availability. What's more, the coffee shop serves coffee (duh) and cocktails from 6:30 a.m. to the end of the night — either 10 or 11 p.m. That means you may pair your cinnamon roll with a hot cup of coffee or a quick cocktail. The choice is yours. At Lilac Bakery, you can choose between a traditional cinnamon roll (left), or vegan with raisins.
Dillon Rosenblatt

2747 East Indian School Road
When you walk into Lilac Bakery, you'll have two cinnamon roll options — regular with frosting, and a vegan roll that comes with raisins and more of an icing texture than frosting. Both are worth your time and money. You have the option to get them warmed (obviously yes), and then the feasting begins. With the traditional cinnamon roll, prepare for a bit of a harder bite on the outside. The inside, however, is as gooey as you could expect from a cinnamon roll. The frosting encrusts the roll in a perfectly thick top layer. The vegan option is nearly as good as the traditional, but not as gooey and melting in the center. The frosting is a bit thicker, giving it a cake-icing texture. Plus, it has raisins, adding a flavor the traditional option doesn't have. Either way you go, you'll enjoy the roll here. 4225 East Camelback Road
Yes, Buck &Rider in Arcadia is a seafood and steak restaurant, but it's also owned by the same people who operated La Grande Orange Grocery & Pizzeria. That means the Buck &Rider brunch menu offers a LGO Bake Shop Cinnamon Roll. The roll is baked to order in house, and it shows. And when it comes out fresh and warm, with that heady cinnamon smell, and you see the frosting oozing over the sides onto your plate — get ready for cinnamon roll heaven. You can only get these bad boys on Saturday and Sunday, so consider them a reward for working so hard during the week.