The 'Book' of Phoenix: Devin Booker, Like the City, Blossoming in the Desert 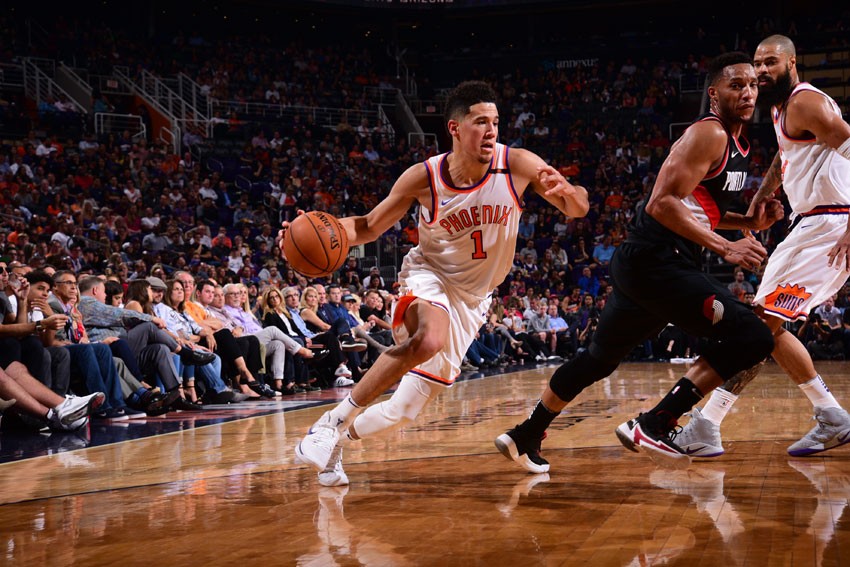 Barry Gossage/NBAE/Getty Images
Devin Booker will begin his fourth season with the Suns next if he is completely healed from hand surgery.

Devin Booker is Phoenix … he’s everybody from everywhere, blossoming in the desert, just like this city.

He is black. He is white. He is Hispanic. He’s African-American, Mexican-American … all American.

His mother and father never married. He was raised by two loving parents living thousands of miles apart.

Four years ago, he was a 17-year-old freshman who wasn’t even a starter for the University of Kentucky Wildcats basketball team. Today, as he prepares to begin his fourth season with the Phoenix Suns, he is one of the richest 21-year-old men in the world.

He’s earned great wealth. He’s learned from poverty and those who work so hard to escape it.

He’s been blessed by great health. He is inspired by people close to him with special needs.

He reportedly dates a Hollywood model (and Kylie Jenner’s best friend), Jordyn Woods. He took a 16-year-old with Down syndrome as his “date” to the NBA draft.

And like this city, the Suns’ budding superstar is learning to embrace his Sonoran heritage. 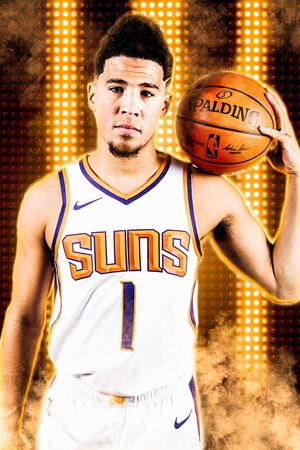 With his Mexican-American heritage, Devin Booker seems like the perfect fit for Phoenix.
Jim Louvau
To understand who Devin Booker is, you must first know his backstory.

Devin is the son of Melvin Booker, a black professional basketball player from Mississippi, and Veronica Gutiérrez, a Mexican-American cosmetologist from Michigan. Her father was a native of Nogales; her mother was from Alabama.

Devin’s parents met during the 1995-96 season of the Grand Rapids Mackers, a minor league basketball team.
He was born on October 30, 1996.

Melvin had been a terrific college basketball player at the University of Missouri, Big Eight Player of the Year, and an All-American in 1994. But he was only 6-foot-1, not quite a point guard, too short to be a shooting guard in the pros, and he was passed up in the NBA draft after college.

Instead, he chased his basketball dream through small towns and foreign countries for more than a decade.

Devin stayed in Michigan with his mother and her two other children, growing up in Midland, a suburb of Grand Rapids where the average household income is more than $53,000. He saw his father during summer breaks from the pro basketball circuit, quickly gleaning his dad’s love and talent for the game.

And by the time he was a freshman at Midland High School, he was already taller than his dad, ultimately standing 6-foot-6.

Melvin Booker finally gave up his NBA quest and returned to his hometown, Moss Point, Mississippi, where almost 75 percent of the 13,000 citizens are black and more than 22 percent live below the poverty level. In 2011, Melvin was hired as an assistant coach at his alma mater, Moss Point High School. He convinced Devin’s mother that he could help their son reach his basketball potential if she would send him to Mississippi.

Devin is forever grateful for her decision.

“For a mother to just let her son move with a father I didn’t spend much time with … she raised me most of my life,” he said in an interview with The Undefeated in 2016. “It takes a powerful woman to do that.”

He says the move transformed him as a person as well as a basketball player.

“Mississippi was a culture change. I guess you could say it was the ’hood.” It was like nothing I had ever seen before, but it was the best experience of my life,” Booker told Phoenix New Times during the Suns media day. “I saw people making the most out of life … saw that it’s possible to achieve your dreams.”

At Moss Point, he became one of the nation’s outstanding high school basketball players, earning a scholarship to the mecca of college basketball, the University of Kentucky. There, he played on one of the most elite teams of all time, a team that won 38 straight games before losing in the national semifinals. Seven of the players on that team were drafted by the NBA in spring 2015, including Booker, who was selected by the Suns, the 13th player taken overall.

Many were surprised by the pick because Booker didn’t even start for UK, coming off the bench to average 10 points per game. He soon proved any doubter wrong. He bested his college average by scoring 14 points in his first Suns game on October 28, 2015. He was 18 years old, the youngest player in league history to make his NBA debut after playing at least one season in college.

That game foreshadowed what was to come. He averaged a career-high 24.9 points last season, his third. He won the NBA’s three-point shooting title during All-Star Week in February. In 2017, he became the youngest player ever to score 70 points in a game. He was also only the sixth player to score 1,000 points before turning 20. The others were LeBron James, Kobe Bryant, Kevin Durant, Tracy McGrady, and Dwight Howard, superstars all. Only James, Durant, and Carmelo Anthony scored more points before turning 21. 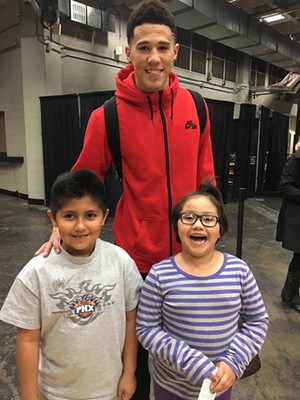 Booker poses with two Mexican-American fans, Hugo and Kassandra Robledo.
Juana Robledo
All that earned Booker a five-year, $158 million contract this summer and the good life in metro Phoenix.

He owns a home near Scottsdale. He drives a Ferrari convertible. (“I know it’s a terrible investment,” he says, smiling. “But I wanted one my whole life.) He hangs out at the clubs in Old Town. He hikes Camelback. He bikes through the desert. He dines at the area’s best restaurants, like The Mission, Elements, and Steak 44.

But his journey to the Southwest has also touched a desire to learn about his Mexican ancestry.

It started two seasons ago, when the Suns played back-to-back games in Mexico City. He scored 39 points each night and quickly became a fan favorite.

“It was the first time my mother had been to Mexico City,” he said. “She really loved it.”

He’s made several trips back since then, developing some business interests as well as fan support.

His interest in his roots grew deeper after the recent death of his grandfather, who everyone called “Papa.“

Papa and “my mother were very close,” he says. “She wanted us to learn more about Mexican culture.”

And Phoenix provides him the perfect platform to connect with the hundreds of thousands of Mexican-Americans who live in the region.

“I’m trying to get more connected in Phoenix with kids who have Mexican heritage,” he said. “All kids need to see someone succeed who came from the same place. … That’s important to me. … Every day I wake up, I know I can affect the next generation.”

Juana Robledo and her two children, 11-year-old Hugo and 8-year-old Kassandra, have been Booker fans since his rookie season. Through family connections, they’ve met him in the locker room, and he’s stopped and taken photos with them a couple of times

“He’s always so cordial, so nice to the kids … very approachable,” said the Mexican-American mother from Mesa. “We were standing outside the parking area one day, waving to the players as they drove out, and he was the only one who stopped. My daughter was so happy.”

But here’s the rub: Robledo didn’t know about Booker's Mexican ancestry until I told her. Like many fans, because of several erroneous media reports, she thought he was part Puerto Rican.

“Oh, that’s even more special,” she said. “It means a lot to see someone with our heritage. That gives us even more connection to him.”

Yet, just as young people find inspiration in Booker, he is inspired by them, particularly his 16-year-old half-sister, Mya Powell, who has microdeletion syndrome, a chromosome imbalance that causes developmental disorders in some.

“Having a special-needs sister has changed my life for the better,” he says. “She shows me you can be happy no matter what.”

That bond also helped him form a connection to Suns superfan Jenna Warren, an 18-year-old who has Down syndrome. She is his biggest fan, often arriving early at the arena to watch him warm up.

Booker took her on a three-day tour of New York during the 2016 NBA draft.

By now, you may think Devin Booker seems just about perfect, someone who represents all the best qualities of our city.

Maybe he is. I have no idea. I only just met him, interviewed him for 15 minutes. I read maybe a dozen articles about him written by others.

Most likely, he has flaws on and off the court.

The Suns have had the worst record in the NBA over the past two seasons, so there’s obviously room for improvement in his basketball game.

But because he played college hoops at my alma mater, I started following his career soon after I began to learn about Phoenix after moving here.

It’s easy to see the parallels between the young athlete and this relatively youthful city. Neither fit any stereotype.

Phoenix flourished in the Sonoran Desert because it attracted so many people from so many places, which is why you see so many Cubs caps, Cheeseheads, and LeBron James jerseys when other teams come to town.

At the same time, the city historically seemed slow to acknowledge its Mexican influences, certainly compared to Tucson. As my colleague Robrt L. Pela wrote a couple of years ago, “Why Does Phoenix Feel So White?”

Perhaps the place and the player can grow together over the next few years.

“People are really important here,” he says. “In New York and L.A., it’s like you’re always under a microscope. Here, people are just more into having a good time. It doesn’t matter who you are.”

Especially when you are everybody, from everywhere.