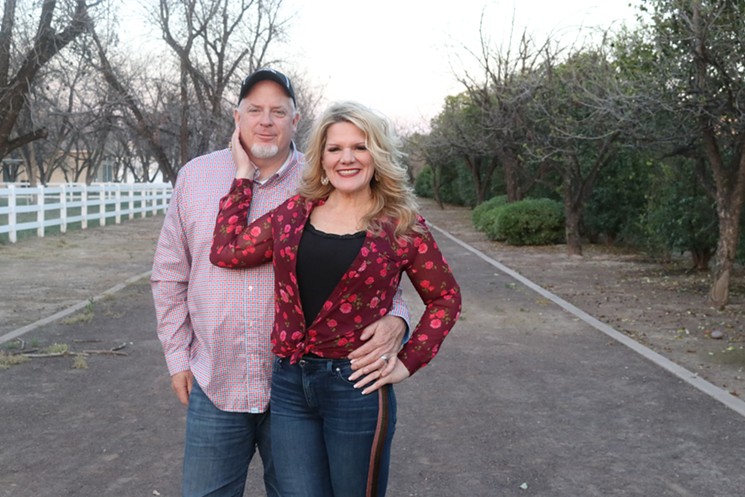 The show follows its stars, Andrea Brewer, Shanell DeRieux, and Jessica Christensen, as they help rescue members of fundamentalist Mormon sects in Utah and elsewhere that practice polygamy as a tenet of faith, as opposed to the mainstream Church of Jesus Christ of Latter-day Saints, which repudiated “plural marriage” in 1890.

Because such cultlike groups frown on defections, those assisting the defectors are not welcome and often encounter open hostility and threats of violence.

One particularly hairy encounter from Escaping Polygamy’s fourth season involved a member of the polygamous Apostolic United Brethren allegedly pointing a red laser mounted atop a high-powered rifle at the Brownings, the cameramen, and the show’s stars as they worked to help a family flee an Apostolic United Brethren community in Mount Pleasant, Utah, in the middle of the night.

Matt, a former Mesa police detective best known for his undercover work battling neo-Nazi skinhead groups, spotted the red light coming from a nearby house and ordered the others to take cover.

“With all seriousness, get behind the frickin’ car,” he snapped during the episode, as the family prepared to leave and unknown vehicles approached from beyond.

At one point, Matt asked Jesse Raynor, the man whose two wives and eight children were on the run, if anyone meant him harm. Stammering, Raynor explained that in the Apostolic United Brethren he had belonged to a “religious, militia-type organization” that engaged in paramilitary exercises in the nearby woods.

“It’s crazy, because, [when] I think about it, this is what we trained for,” Raynor told an unamused Matt.

During a recent interview with Phoenix New Times, the Brownings remembered the situation as unexpected and harrowing. Matt recalled that both he and Tawni reverted to their natural roles: Tawni as nurturer, he as protector. 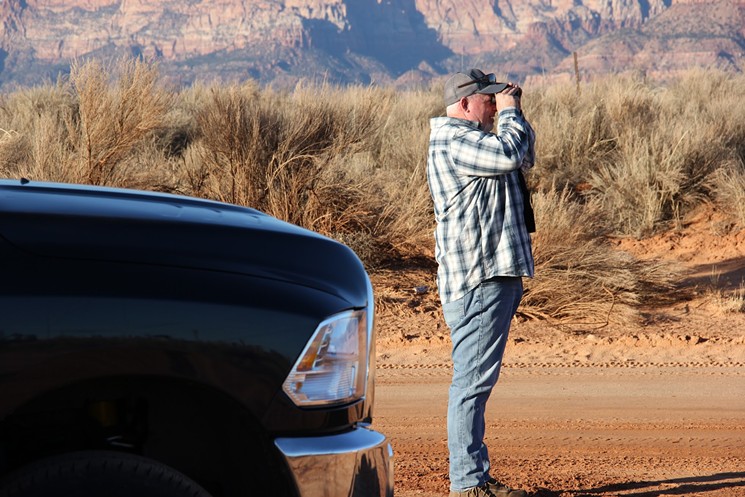 “Tawni is the love and compassion and the hugging and all this stuff,” he explained. “While I’m, 'Get behind the frickin’ car or you’re gonna get your head blown off.’”

Tawni gave credit to the actions of the show’s stars, all half-sisters, who are themselves escapees from a powerful polygamous cult known as the Kingston Clan.

“I thought the girls were amazing,” she said. “I feel like we're a real team. Once they knew the threat was legit, their focus was on making sure the children didn't feel that.”

A mother of five, Tawni normally works behind the scenes of the show, mining an endless number of sources within the various polygamous sects involved to unearth the stories the show tells. Sometimes viewers will hear her voice as she interviews those looking to get out of polygamy, but so far, she has not appeared on camera.

On the other hand, Matt, a giant teddy bear of a man, has become a reluctant real-life character on the show, playing himself as the ever-vigilant shield for Escaping Polygamy’s staff and the show’s subjects.

How did the Brownings score this gig? According to the couple – high-school sweethearts and Phoenix natives who have been married now for nearly 30 years – the neo-Nazis are to blame.

Matt became famous for hounding high-profile neo-Nazis during the tail end of his 20-year stint with the Mesa Police Department. He went undercover, joining such racist groups as the National Alliance and others, and helping bust murderous white supremacist crews.

After he emerged from undercover work, Browning went public in 2007 during a forum led by the Anti-Defamation League at the Arizona Legislature, in which he denounced prominent neo-Nazis with powerful friends in Arizona politics. As a result, he and his family were targeted with death threats. In one incident, a lamb with its throat cut was left at the Brownings’ doorstep, with local neo-Nazis as the suspected perpetrators.

Such attacks on her family motivated Tawni to get involved. She began doing research online about white supremacist groups, establishing a fake account on the former Facebook for fascists, NewSaxon.org, and chatting up the wannabe Schutzstaffel.

“They were very simple-minded, most of them,” Tawni said. “But there were some that just shocked me that were much more intelligent … then I realized they were people. too.”

Though Matt discouraged Tawni’s endeavors, she persisted, seeing herself as Matt’s assistant.

Matt left the Mesa PD in 2011, but he continued monitoring Nazi skinheads as the head of the Skinhead Intelligence Network, an organization he founded in 2005 to keep tabs on violent white supremacist groups. During a trip to Florida to check out a prominent neo-Nazi, Matt and Tawni had a fateful encounter with a TV producer interested in Matt’s undercover work as possible reality-show fodder.

The neo-Nazi angle never materialized, but the woman kept telling Tawni about another show she was having trouble with, one regarding polygamous cults.

“Finally, I'm like, what is this show?” Tawni said. “She told me and I said, I just think you're approaching it the wrong way. If you approach it like an investigation, if you go in there and get to know the people, I think you'll have more success. By the end of that week, I was on this show as an investigative producer.”

Tawni said she started out by learning about the show’s stars and their experiences, following up leads from there. Before she knew it, she was chatting up cult members, who were giving her priceless intel on these polygamous groups’ activities.

In an effort to keep her safe, Matt began helping out. And before you could say “sister wives,” he was appointed the show’s security guru.

The show has since become both a flashpoint for those opposing and supporting these fundamentalist LDS groups. Indeed, unlike any reality show before or since, Escaping Polygamy has undertaken a deep excavation into the history of these sects and their current activities.

Not only did the show first expose the existence of an Apostolic United Brethren militia group – a fact confirmed by the Salt Lake Tribune several months later –  it also broadcast for the first time secret videos of the Kingston Clan’s church services, provided by a confidential informant.

And in 2016, when federal agents from the Internal Revenue Service raided Kingston businesses in Salt Lake City, the show’s cameras were nearby, recording the event. That operation would eventually lead to the indictment of two Kingston men and a Turkish national in a half-billion-dollar fraud scheme.

The reality show has exposed other polygamist cults as well.

Escaping Polygamy has dedicated several episodes to documenting the abuses of the Fundamentalist Church of Jesus Christ of Latter-Day Saints in the twin cities of Hildale, Utah, and Colorado City, Arizona. The show also has spotlighted the children of Warren Jeffs, the imprisoned leader of the FLDS, describing the mental and sexual abuse they suffered in the cult.

Interestingly, Matt and Tawni are observant members of the conventional LDS church, which gives them a special insight into the bizarre worldview of the cults documented by the show.

“We both come from polygamous backgrounds,” Tawni said of her faith. “I mean, as far as our ancestors, five generations back, mind you, but still … my grandfather fought in the Mormon battalion and had several wives.”

Matt can claim as a great-aunt Ann Eliza Young, one of Brigham Young’s 55 wives, who ultimately divorced the church patriarch and became a fierce critic of polygamy.

The Brownings have befriended current and former cult members, both the refugees from polygamy and dissidents within these groups.

Tawni attended the wedding of Rachel Jeffs, one of Warren Jeffs’ many children, and Tawni likes to recount how young women still in the FLDS have come to her home, where some of them learned to swim in in the Brownings’ pool – fully clothed in long gowns that the FLDS requires them to wear.

And yet, Matt and Tawni have different opinions of polygamy. Like the mainstream LDS church, they oppose the practice, which is illegal in all 50 states. But Matt believes it can and will be eradicated, while Tawni says polygamy has “been here since the beginning of time” and will never be fully erased.

“Nobody can show me in the Bible where it says we need to kick you out of the church because I want to take your wife,” Matt said of one appalling FLDS custom.

Tawni takes a softer line, which makes sense for someone who at times is practically embedded in the polygamists’ ranks.

“I love the people,” she said. “I'm a guest in their community, and I’m so grateful for the opportunity to be a guest.”