Admit it, if you haven’t already binge-watched the 10-episode run of Trailer Park Boys: The Animated Series on Netflix, that’s what you have on deck for this weekend. The legendary mockumentary is now in somewhat of a 13th season, and these Canadian degenerates are ready to be ultra-ridiculous now that the laws of physics are out the window.

But what about snacks? All that talk of pepperoni and cheeseburgers more than likely makes you hungry. And you could probably go for a rum and Coke to boot. Here’s how you can dine park-style around the Valley before or after you’ve made it through the show’s final catastrophe. Spoiler — they end up in jail (or so we would assume). The Counter offers the chance to create some personal burgers.
Chris Malloy
Cheeseburgers
The Counter
50 North Central Avenue
While Phoenix unfortunately (fortunately) has no Dirty Burger run by Phil Collins, The Counter is one of our favorite burger joints. Here, you can create your own burger, making it your own, personal burger. In fact, the Counter has such a vast range of toppings that you check a few boxes on a sheet to order. But if all that sounds like too much, you can order a house burger like the Old School — all-natural beef with Tillamook cheddar, lettuce tomato, onion, and pickles. Perfect to drill into your cheeseburger locker.

Liquor
Tops Liquor
403 West University Drive, #104
Ready to let the liquor do the thinking? There are liquor stores everywhere, including some drive-thru options, but one of the most iconic in the Valley is Tops Liquor by ASU. It’s packed with every beer, wine, or spirit you can imagine, including a whole aisle of white liquor in case you’re feeling sluggish and need a snap. There’re also snacks and soda around, meaning you can get set up with chips, pop, and a bar.

Chicken Fingers
Bliss ReBAR
901 North Fourth Street
Maybe life can be about getting drunk and eating chicken fingers. Cue in Bliss Rebar in Roosevelt Arts District. There’s liquor, a big patio so you can snap for some smokes, and you’re free to order the classic chicken tenders. These are buttermilk and spiced black pepper tenders served with some barbecue sauce and chipotle ranch. And though you’re thinking the good kind of chicken fingers cost $8, these must be extra good because they cost $9.50. Get the Arizona Julian — rum and Mexican coke at Taco Guild.
Lauren Cusimano
Rum and (Mexican) Coke
Taco Guild
546 East Osborn Road
And something to drink? A short rocks glass of rum and Coke must, of course, always be in hand during all 10 episodes (plus other weekend chores like mowing the lawn, cleaning the shed, whatever). Though you can make a great one at home, how about taking on a more local spin? In additional to tequila, Taco Guild’s bar has dark and light rum, and the best part: You can mix it with Mexican Coke (which they have in bottles at $3 a pop). Head there for happy hour and channel Julian with the cocktail in hand at all times — with the other one taking down the complimentary chips and salsas. Just try to pi-zace yourself.

Pepperoni
DeFalco's Italian Eatery, Grocery & Deli
2334 North Scottsdale Road, Suite 133A, Scottsdale
What’s funny is the DeFalco family actually emigrated from Italy to Toronto, then a few other spots before settling in Scottsdale. DeFalco’s carries American Boar’s Head products, so you’re sure to get a phallic pepperoni at this place. 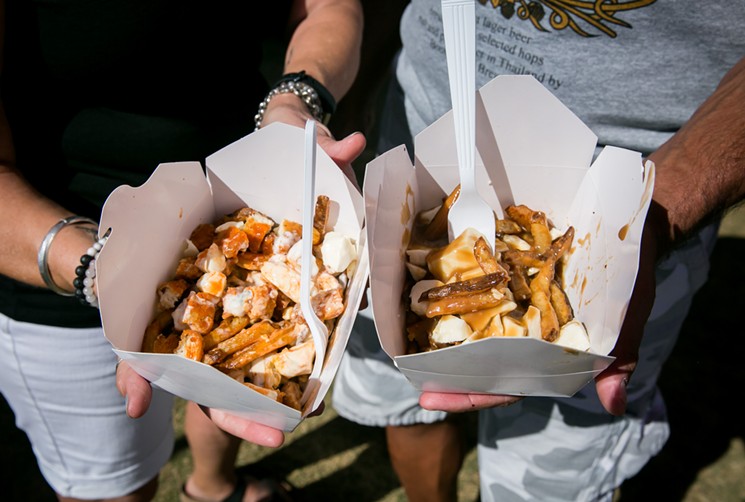 Ravioli
Salerno's Restaurant & Pizzeria
3921 East Guadalupe Road, Gilbert
We don’t encourage you to eat nine cans of this stuff (not that these come in cans), but the ravioli at Salerno’s is some of the best in town. Choose from meat or cheese ravioli, and go for the iconic pink sauce — a mixture of Alfredo and red sauce. The 1966-established restaurant is family-owned and will probably let you eat as much as you’d care to admit. 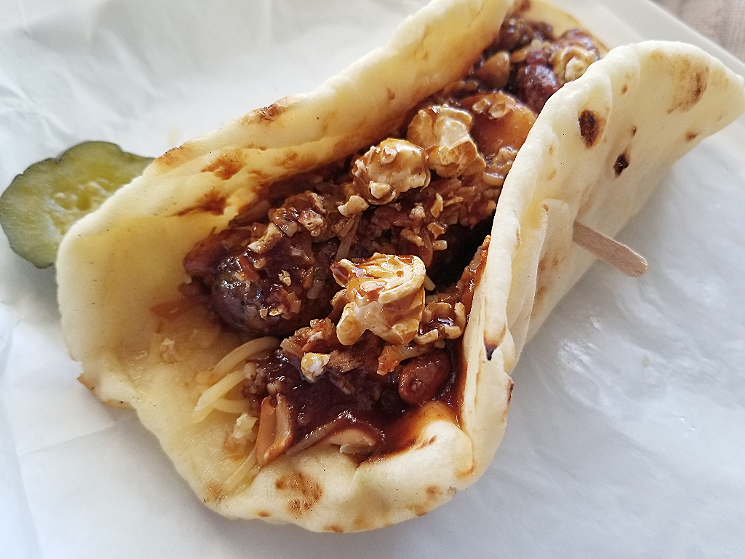 The Bear is perhaps Short Leash's craziest hot dog.
Patricia Escarcega
Hot Dogs
Short Leash Hotdogs & Rollover Doughnuts
4221 North Seventh Avenue
Short Leash Hot Dogs has been a Valley staple for unique hot dogs since 2010, back when it was just a roving food truck. Choose from meat options like beef, bratwurst, spicy, apple Gouda, chicken, or veggie, and go for the Lady, Bear, or Devil Dog. All of the signature dogs are wrapped in naan bread, meaning it would probably be the best dog even a veteran (and veterinarian) like Sam Losco has ever had. Pair it with duh, chips, or maybe spring for the poutine. There’s beer, too. 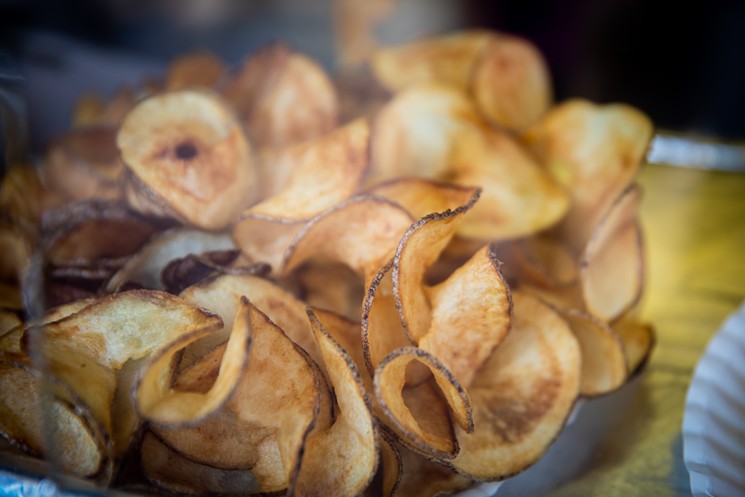 And some juh-lop-pan-noh chips, obviously.
Jacob Tyler Dunn
Potato Chips
Sprouts Farmers Market and Fry's Food Stores
Multiple Locations
What would this list be without chips? It’s tough to find Old Dutch brand chips around here, so may we suggest hitting local grocery store like Sprouts or Fry’s. No, there’s probably not all dressed or chicken flavor, but there’s definitely jalapeño and dill pickle options.