A scene from In Reality.
Courtesy of Ann Lupo

Ingrid is a haunting documentary by Morrisa Maltz. Her protagonist is Ingrid Gipson, a woman who leaves her family behind to make art.

The second film, In Reality, initially was going to be a documentary focused on Ann Lupo’s journey to find out why she found herself playing the role of the unrequited lover, but the autobiographical film’s structure changed as it developed. The offbeat movie turns the rom-com formula inside-out with its unusual structure and fully developed characters.

Both filmmakers, who met each other while touring the festival circuit, will host a Q&A session after each screening. 
Lupo is also the co-director of the 2013 documentary Documented about journalist Jose Antonio Vargas. She loved her experience but knew she had “absurdist comedy stylistic narrative” waiting to get out. In Reality began as a short film and a web series. Friends urged her to develop it further.

“I did not intend to make a feature film about myself,” Lupo says. “I started interviewing myself to tell the story, but it didn’t really work because you can’t see your own blind spots. I like to say that fate intervened because my friends (and co-writers) Esteban Pedraza and Aaron Pyrka got back in touch with me. I told them my idea and they came on [board].”

Maltz says audiences are inspired by Gipson’s self-sufficiency in Ingrid, but there is one scene in the film that has proven to be divisive: Gipson kills a rabbit for food. The act is not very graphic, but Maltz says PBS cut it from an upcoming episode of their Reel South documentary series. The documentary is currently scheduled for broadcast in May. 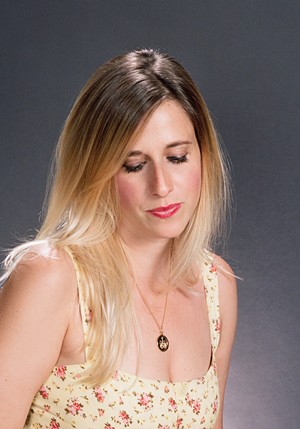 “I have seen so many films where a bearded man in the woods is doing something like that and the audience doesn’t flinch,” she says. “The fact that she meditates with the rabbit before [the act] and it’s a woman doing it — subconsciously the audience doesn’t expect it. It’s harder to swallow.”

Each director shared with the New Times individually over the phone their observations on how the filmmaking world has changed in the last few years. Their answers appear together and were edited for length and clarity.

Phoenix New Times: Had you planned on making the leap to feature films or did the story or the subject call for it?

Morrisa Maltz: Ingrid was originally going to be a short documentary, but I had enough material to make it feature length. I think both career-wise and creatively I was very ready to make a longer-form piece, but I didn’t intend on trying to make Ingrid a feature-length piece. It was what the work needed to be. It wasn’t planned.

What was the experience of raising money like and how did you work within your financial constraints?

Maltz: Raising money is the worst part of the experience. Ingrid was made for around $15,000, which was given to us by a friend of hers. I continued to raise money afterward but it wasn’t happening. I think because my work is so experimental that it is hard to show someone what the end film was going to be. It was a lot of in-kind favors from people to help make the film.

For my next film, it’s been a similar story. It’s really hard to raise money for these small independent films which is really sad. That’s where the opportunity to really create is. It sucks to have to put 90 percent of your work into raising money and 10 percent into the creative part. Everything takes a little bit longer, but that made it into a better film because it had time to breathe.

Ann Lupo: I funded the first stage of production with money that I had made editing commercials. Then we raised over $45,000 on Kickstarter. We had a couple of private investors after our original backers, Super Deluxe, shut down.

It’s really crazy when I think about it. People kept literally and metaphorically investing in this movie, which is how it grew into a feature.

I think both of your films shatter a lot of conventions and discusses the pressures society puts on women. Do you find audiences are picking up on that? How are they reacting to seeing these realistic characters on screen?

Lupo: I did not set out to make a statement. I knew by telling my story as accurately and authentically as [possible], I could tell it would be the statement that I wanted to make: that I exist, and my feelings and life experience are valid, and women can make good movies. I’ve received a lot of comments from young dudes that they never felt the female perspective before. That is awesome for me to hear.

Before we spoke, I was on the phone with a colleague and he told me that he got “Ann Lupo-ed” over the weekend. He made a catchphrase for when you get friend-zoned. I will wear it with honor. The good news is love is out there.

Maltz: Women want to see themselves realistically. I think every woman can relate to what they are seeing in [In Reality].

I don’t think every woman is like Ingrid, but they have to grapple with the same choices she had, like grappling between your family life and your creative life. Society does expect women to do it all or do one thing well. When women decide to do their own thing and be their own person, it’s very different from when a man does it. It’s looked at very negatively. The fact that Ingrid isn’t shown in the film as a bad person but as someone who led the life that she wanted, I think is something that means a lot to women. It’s important and comforting in a way.

What did you learn from your protagonists?

Maltz: I was always confident in my creative process, but I needed to reboot that in some way. Spending all that time with Ingrid did help me feel more comfortable in doing the stuff that I want and continuing to do it my way.

Lupo: Specifically, I learned how to take care of myself and access self-love and being the best version of myself. I don’t want to sound like an Instagram post, but it’s a complicated process. I learned about endurance, commitment, and non-romantic relationships. My team put a huge commitment into this. Our relationships were tested but came out the other side stronger.

Gender is a topic that has dominated the cultural conversation, especially in the filmmaking world. From your perspective, have you seen a change happening?

Lupo: I feel like I am seeing a lot more great directorial debuts from female directors and press about female directors kicking ass. It’s so inspiring and not what you would have heard about a couple of years ago. It gives me the willies thinking about how dead that conversation was when I was in film school. I am inspired by it, but I hope it’s not some weird media thing [that] goes back the way it was. I don’t think it will be because so many women are doing it and they will only grow in their careers.

Maltz: It’s such a tricky question for me because I am a woman who makes things, but I work outside of the industry. My friends in the industry would answer differently than me. I feel more like Ingrid than I do a filmmaker in Los Angeles. I think it’s just as important to go full-speed ahead without worrying about the issues.

You can’t keep talking about how awful it is because that is taking time away from you making things and making the change actually happen. I think when women consistently work hard, then the change happens. Ann’s film is an example of that. She figured out how to make it happen and now it’s done really well.