An old friend of Ann Newman’s emailed her last week. He’d heard that Metrocenter was a ghost town, that it might be torn down soon.

“Remember all the time we spent there?” Ann’s friend wrote. “Remember the picture I took of you there, standing outside in the rain one day in 1979?”

Ann didn’t remember being photographed in a downpour, but she certainly remembered all the hours she’d spent at what was then the biggest shopping mall in the Southwest.

“I could probably walk this place in my sleep,” Ann told her friend when they met at Metrocenter a few days later. It was Friday at noon, and the mall had just opened. Ann and her friend were among a dozen people who wandered the tiled walkways.

“I have to take a picture of this,” said Ann, who retired as a salesperson last year and lately has been studying photography. “It’s a morgue. Completely sad.”

Ann remembered when kids in this part of town had nothing better to do than hang out at the mall, eating and watching movies and maybe doing a little shoplifting. Spencer’s Gifts. 5-7-9. Hickory Farms, where Ann and her friends went for free samples of Gruyere and kielbasa. She remembered how exciting it was to see Metrocenter as the setting for the movie Bill & Ted’s Excellent Adventure.

“What was the name of that shop where you could make your own perfume?” Ann asked.

“Lotions and Potions,” her friend offered.

“Yes! It was next to that place where you could get an old-time picture taken wearing some ancient saloon clothes.”

Is That Another Shopper?

Off in the distance, Ann spotted another shopper. Or maybe it was a janitor. “The structure is the same,” she sighed. “It’s still space-age looking. The skylights and the beveled ceiling are all still up there.”

Ann and her friend stopped in front of a large, plaster wall covered in op art fossils. “I remember this wall,” Ann’s friend told her. 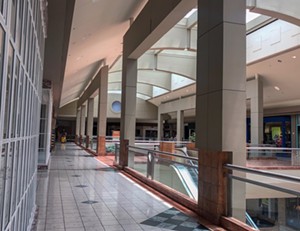 Ann Newman
“Yeah,” she said. “This was Goldwater’s.” The glass doors were chained shut now, the display windows painted over with black enamel. Ann pointed. “That would have been Lerner’s, next door. And these are the escalators that we would ride backwards on. Every kid did that.” Now the escalators were switched off, barricaded and still.

The pair passed darkened storefronts — six, eight, a dozen. Ann stopped to peer into a shop with a sign covered in black fabric. “They’ve got a lien,” she said, reading from a notice on the door. “They’ve been closed by the landlord. You don’t see that every day.”

A clerk from a sunglasses kiosk approached Ann. “Hi,” Ann said to the woman. “We’re walking down memory lane.”

Ann talked about time marching on. She had read that Westcor, the developer that built Metrocenter in 1973, had designed this mall for obsolescence. “They kept building malls that competed with Metro,” she explained. “Think about it. Before this place was here, we used to always go to Christown or Park Central. Right? This mall robbed those malls of shoppers, and then the new malls did the same thing to this one.”

And now, Ann’s friend reminded her, everyone shops online.

“Wait,” he said, and stopped walking. “Is this where the fountain was?”

“Yes,” Ann replied. “It went up two stories. And this is where you went to visit Santa, right? And then Rhodes would have been down there.”

They stopped in front of Spencer’s Gifts. “I can’t believe this is still here,” Ann laughed. “It smells exactly the same.”

Ann found a Spencer’s clerk. “Do you guys have a special scent?” she asked. “Do you still sell black light posters?”

The clerk smiled. “It’s the incense,” she told Ann. “We sell incense. The black light stuff is all the way in the back.”

“We wouldn’t have been allowed to,” Ann said, then scowled at a display of rubber vomit and giant horse flies. “Have these puka shells been hanging on this peg since 1974?”

They passed a wall of butt plugs and rayon lingerie. Ann’s friend quickened his pace. “I don’t think we’re going to find a mood ring here,” he whispered, and Ann laughed.

“My brother had a black light,” she said, flipping through a rounder of garish neon posters. She stopped at an image of a nun flipping off a vampire bat. “Can you imagine being a buyer for this place? I have to believe that kids are just not shocked by anything anymore.”

Back in the mall, Ann pointed out the Foundation for Service Dog Support and the H.A.L.O. Pet Adoption Center. “This place is going to the dogs,” Ann said, and then she groaned. “Sorry.”

They passed the Phoenix Conservatory of Music where the pretzel place used to be, and a slot car studio where a jewelry store had been. Everyone Ann knew shopped there in 1977. They used to do pierced ears for $2.

There was Phoenix Sofa Factory, and a wellness center. But no Miller’s Outpost or Jeans West or Chess King. “Remember KG Men’s Store?” Ann asked. “My first boyfriend worked there. He sold Angel’s Flight suits. They were made all of nylon.”

Ann remembered searching for a pair of Famolare shoes in the mid-'70s. They had wavy plastic soles, and she yearned for them. “It was either that or another pair of Candies,” she explained.

Not all of Ann’s memories of Metrocenter were happy. “When I was little, my mom made me come to Rhodes on Saturday mornings for something called ‘White Gloves and Party Manners.’ It was how to set a table, how to dress for dinner. We actually wore white gloves, all these little girls.” The course lasted just a couple of weeks, but it felt like an eternity.

Ann’s friend asked her to curtsy. She did, and then they both laughed. “I guess I did get some value out of it,” she admitted. “At business dinners, I knew all that stuff about which fork to use, and people would just look at me like I was crazy.”

Ann and her friend arrived at Ground Zero: a far corner of Metrocenter where they’d passed entire days of their young lives, ice-skating and going to movies and drinking Orange Julius and playing air hockey. “There was a bar shaped like a jet airliner that wrapped all around the ice rink down below,” Ann remembered. “It was probably an urban legend, but I remember hearing that a girl jumped from the first floor onto the ice rink and killed herself, and that’s why they closed the rink.”

Everyone heard that story, Ann’s friend said. They stopped in front of the place where the ice rink had been. There was a food court there now which sold pizza and wings and rice bowls.

“There’s a good Vietnamese place on Bell Road,” Ann said as they turned to go. On the way out, they passed two more people. They found an escalator that was still running, and as they stepped off, Ann paused.

“Wait,” she said. “I think this is where the fountain used to be.”