AZ Patriots via Facebook
Jennifer Harrison of the AZ Patriots in a video posted to Facebook shortly after the visit to Democratic headquarters.
On Thursday, anti-immigrant group Arizona Patriots snuck into Democratic headquarters in Phoenix by pretending they were dropping off donations for asylum seekers. Instead, they left two bags of garbage apparently picked up along the border.

As per usual, Jennifer Harrison livestreamed their antics on Facebook, though it appears there was an issue uploading the video and it can no longer be watched. But Arizona Mirror reporter Jerod MacDonald-Evoy caught the live broadcast and posted about it on Twitter.

AZ Patriots, a splinter group of Patriot Movement Az just got into the Phoenix Democratic headquarters under the false pretense of dropping off donations for asylum seekers to drop two bags of garbage picked up along the border in their office. pic.twitter.com/XmMwQP7JXd

"That shits all over the floor. Dirt, hepatitis and all," Jennifer Harrison while the group drove away. https://t.co/qV55njh3O5

Harrison denied they left trash, but she did not answer a message from Phoenix New Times asking for her to recount what occurred.


Bahahahahahahha!!! It wasn't garbage, Jerod. It was literally their pants!! https://t.co/O88wFD3aE1

The bags dumped at Democratic headquarters, located at 2910 North Central Avenue, contained more than just pants, according to MacDonald-Evoy.


And condoms, lubricant, I saw a toothbrush, some papers and other discarded, abandoned or otherwise unwanted things, also known as garbage. https://t.co/YtS6FJ8fNM

It's likely the bags contained the trash AZ Patriots had picked up near the border days earlier, as one fan's comment indicates. 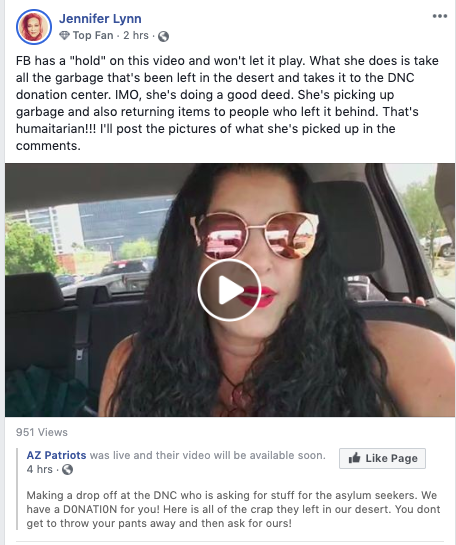 Facebook screenshot
Harrison used to be a part of the AZ Patriot Movement, but earlier this year, the group splintered and she formed the AZ Patriots.

While Harrison and her cohorts claim they are "citizen journalists" who "stand boldly for American values and conservative principals [sic]," their sneering attitude toward immigrants and asylum seekers often undermine their attempts to portray themselves as the morally justified gatekeepers of the country.

Harrison is fond of livestreaming her every waking moment, including hiding in bushes and shouting at migrants to go home. Last year, Harrison and fellow anti-migrant activist Lesa Antone protested outside the State Legislature, where, according to the Arizona Capitol Times, lawmakers and staff members said Patriot Movement affiliates singled out dark-skinned individuals and asked if they were "illegal."

Harrison denied the allegations in an email sent to the Cap Times. “First, we were a group of several white, black and Latina Americans," she wrote. "To make assumptions that we were only calling out Hispanic representatives or ‘non-white’ legislatures (sic) is a disgusting, blatant lie."