Life According to Tommy Chong

Jim Louvau
Tommy Chong at 81 — still living the dream.
There are hundreds of ways you can kick off a conversation, and I went with that old, moldy chestnut that Arizona natives say to out-of-towners when their trip to the Valley coincides with triple-digit temps, something along the lines of, “How about that heat?”

I cringed as the words tumbled out of my mouth, acting like a nervous date meeting his girlfriend’s parents at the airport. I was only 20 seconds into my interview with one of the greatest legends of the cannabis world, Tommy Chong, and I’d already wandered into fanboy territory.

Chong, who’d been invited to town for a promotion with Tempe’s Mint Dispensary in early June, smiled and told me he didn’t mind the heat in the least.

“You can always take it off.”

Turns out, that wasn’t a bad way to get the ball rolling. His answer immediately showed what kind of a man Chong is: remarkably optimistic and a source of some of the most positive energy you could ever take in from another human being.

This is a man who has legitimate reasons to be sour toward life. He’s spent decades battling cancer. He was locked up for nine months for one of the most bullshit reasons you could possibly imagine, at a time in which the federal government had far more important things to do than build a case against an aging celebrity for selling bongs. And yet there he was, with a level of optimism that’s about 90 percent admirable and 10 percent incomprehensible. 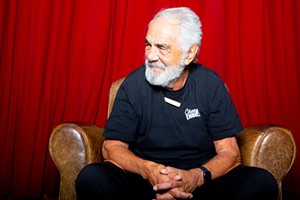 Chong was in town for a dispensary promo.
Jim Louvau
“I try to stay vertical,” he said. “I’m 81 now. I got depressed last year, thinking, you know, ‘Wow, this act’s coming to an end.’ And then I just made up my mind that I’m an experiment. I wanna see how long I can keep going. And how long I can keep going with a young attitude. ’Cause that’s what it is. That’s what keeps you here. You need a reason to be here, you know?”

So what’s his reason?

“I feel that I have a duty to show the world that, you know, smoking pot and working out and eating right has dividends.”

This couldn’t be more evident, in his case. Yes, he’s gray-haired and he moves a bit slower than he used to. But does he look like he’s in his 80s? No way, man.

When I asked him what his secret is, he had the answer locked and loaded.

“My wife,” he said, with zero hesitation. “That’s my secret. That’s my life. When I met her, everything changed. My life changed. I fell in love as soon as I saw her. Even though I was married, I saw her and something happened.”

His longtime wife, Shelby, was the one who introduced him to the world of dance, and he took to it like a packed bowl to bong water. (If you want proof, go on YouTube and check out his impressive run on Dancing With the Stars.)

The upbeat and enlightened attitude also stems from his integrity. He stayed true to himself despite being in the world of show business for what seems like a lifetime. For instance, he turned down a role in the original Lion King film and left a hefty sum of money on the table. But Chong was one of the original longhairs in the age of Nixon, and his look comes from the inside out. It’s not a costume. To sign up for a Disney animated feature would go against his counterculture ideals.

“Once you compromise, you can’t get it back,” he said.

Chong is fully aware that he’s not getting any younger. He firmly holds on to the belief that when his time is up, it’s only the end of the “semester” in an eternal state of learning.

While probably not immortal, Chong clearly exists on a higher plane.