Wikimedia Commons
Phoenix's Union Station was once a bustling hub for passengers and products.
Phoenix’s historic Union Station is for sale.

The property went on the market on Monday, according to Bob Young, of the commercial real estate agency CBRE.

Sprint Communications, which has owned Union Station since 2004, tapped CBRE to be its sole agent. No price is listed, but the agency is offering “qualified investors the opportunity to purchase fee interest” in the property.

The listing was first pointed out by Jon Talton, a former writer at the Arizona Republic and now a columnist for the Seattle Times, on his blog Rogue Columnist.

The area surrounding Union Station is downtrodden, although it is not far from the bustling and expanding hub of downtown Phoenix. It is bounded by South Seventh and Third avenues, just south of West Jackson Street and the Fourth Avenue and Madison Street jails.

For the year 2020, the Maricopa County Assessor’s Office valued the property’s full cash value at nearly $4.3 million. That value has climbed noticeably in recent years. In 2016, the assessor’s office determined it was worth $1.04 million. 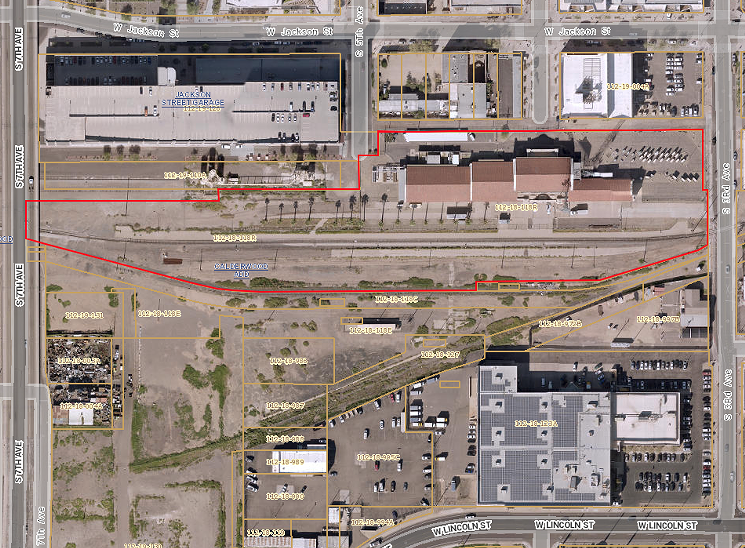 Union Station
Maricopa County Assessor's Office
Sprint uses the station as a switch center, using one of the property's two communication towers. It leases the other to Union Pacific Railroad, an agreement slated to end in March 2023.

The station is nearly 100 years old. The decline of the age of the train reduced Union Station to a shadow of its former self, and CBRE's advertising tacitly cops to the extensive repairs the station needs.

According to CBRE, the lease with Union Pacific "provides short-term income and some cushion for a new owner while they finalize rehabilitation pans for the Property." It also says the station is for sale as-is, and describes the property as an “iconic historic rehabilitation opportunity."

The real estate firm touted various sources of funding for the next owner to carry out that work.
“Depending on the vision of a new owner, the Property may be eligible for a myriad of monetary and tax advantaged programs,” CBRE’s online description of its new Union Station listing says. Those programs include local and federal tax credits and bond funds for historic preservation.
The train station was built in 1923 by the Southern Pacific and Santa Fe railroad companies. When it was completed in October of that year, the Arizona Republic called it the “finest Spanish Mission type structure in America,” with stucco walls, a red-tiled roof, and arcades.

For decades, Union Station served as a hub for various regional and transcontinental trains, linking Phoenix with New Orleans and Los Angeles through Southern Pacific's Sunset Line, or with Los Angeles and Chicago through Southern Pacific's Golden State Line. Trains lugging produce and mail chugged in and out of Union Station. In December 1986, the station was added to Phoenix’s registry of historic places.

Today, the Sunset Limited, which runs from Los Angeles to New Orleans three days a week, stops not in Phoenix but in Benson, Maricopa, Tucson, and Yuma.

"While the Sunset Limited/Texas Eagle is described to provide service between the Phoenix and Tucson metropolitan areas, it operates during late night hours, and the 'Phoenix' station is located in Maricopa,
about 35 miles south of downtown Phoenix, limiting the attractiveness of intercity travel," the Arizona Department of Transportation pointed out in a 2011 report.

Talton, the Rogue Columnist, who penned a history of the station (and an ode to trains) in 2010, called for the city of Phoenix to step up and take over the property to establish commuter train lines to other cities in the Valley of the Sun.

“City leaders with vision and vigor would purchase Union Station or partner with a private-sector developer with historic-reuse expertise,” Talton wrote. “The goal: Return Amtrak to Phoenix ... and begin commuter service to such suburbs as Buckeye, Goodyear, Glendale, Peoria, Surprise, Mesa, Gilbert, and Chandler.”

The fate of Union Station could be a litmus test for the new city council, with its two freshly sworn-in members, Talton posited.

But Matt Heil, a spokesperson for the city of Phoenix, said that real estate staff in the city’s finance department were “not aware of any department within the city that is interested in purchasing, or that has ever considered purchasing Union Station.”

Any plans to renovate historic properties have to go through the city’s Historic Preservation Office, said Angie Holdsworth, a spokesperson for the city’s Planning and Development office. “Any requests to demolish would be denied, and if that were pursued any further there is a long process,” she added.