Chris Malloy
Oxtail Pho from Basilic Vietnamese Kitchen.
Restaurants with a good lunch menu and atmosphere are important. It’s a break from your work day, an excuse to eat something aside from a homemade salad. So it’s terrific news so many new lunch spots have opened in the Phoenix area lately, from a second location of Pane Bianco to a Cajun kitchen and a gluten-free burrito spot.

68 West Buffalo Street, Chandler
This is the ideal lunch spot if you're looking at a half day. Downtown Chandler now has a Craft 64 — a pizzeria and craft beer bar (plus wine and cocktails) with more than 30 options of Arizona beer, including eight from in-house. And to eat, it also offers wood-fired pizzas, sandwiches, salads, and bruschetta. 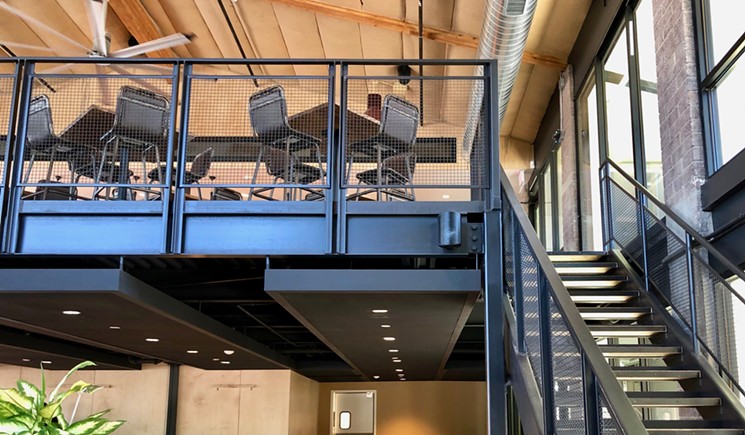 Lunch in the loft?
Lauren Cusimano

1915 East McDowell Road
The owners of La Santisima Gourmet Taco Shop opened a Jalisco-style restaurant, La Marquesa, where most of the food is cooked in a mesquite-fired clay ovens. Think chammoro (pork shank), cachete (beef cheek), marrow bone, plus appetizers and meat-heavy tacos. Yet the main focus of the menu is birria in the form of goat, beef, shrimp, and a vegan option with mushrooms, peppers, and nopales. Dress it up with freshly made corn tortillas, onion, cilantro, key lime, and salsa.

4011 North 32nd Street
George Frasher of Frasher’s Smokehouse has recently opened Mrs. Chicken — a Nashville hot chicken restaurant in Arcadia. Aside from the great name, Mrs. Chicken offers typical chicken joint entrees (two-piece breast with a side, for example). But if you like that Nashville hot chicken just that — hot — you may elect the XXXHot option. There are also wings, tenders, sides like crinkle-cut fries, and dessert options.

1505 East Van Buren Street
This is the second location of Pane Bianco, yet this one offers breakfast, like pancakes made from Hayden Flour Mills and toast. There are of course market sandwiches, including the arrabiata, or angry, chicken sandwich. And of course, there are squares of pizza al taglio. And for starters, literally, there are olives, fresh mozzarella, Francesca’s meatballs, and candied pecans.

Slices is back in a big way.
Angelica VanAuken

11 East Sixth Street, Tempe
In case you didn't know, Slices Pizza Joint has reopened as Slices on Mill with new owners, but the same East Coast-style pizza. There are also make-your-own calzones, cauliflower crust, and specialties like mac and cheese, loaded potato, and buffalo chicken pizzas. This is ideal for anyone popping around Mill Avenue look for a mid-day carbo load.

2303 North 44th Street
The Dirty Drummer has reopened as … The Dirty Drummer. There’s a new look, new stage and dance floor, and new jukebox, but the same old menu and vibe. The former chef has also rejoined the team to help keep the old dishes alive. The Drummer features domestic and Arizona beer, wings, other appetizers, and the famous Drummer burgers. There's a veggie option, the Chili Drummer, and the Super Drummer — two-thirds of a pound of beef with cheese between the double patties. The best part is watching, and feeling, it get made on the grill right behind the bar.

4712 North Goldwater Boulevard, #1210, Scottsdale
Ever get hungry while you're shopping? Of course, we all do. This Southern California-Mexican restaurant opened a Scottsdale Fashion Square location on Cinco de Mayo. Tocaya Organica offers everything from gluten-free burritos to churro bites, salads, tacos, burritos, bowls, and many a diet-friendly option.

1325 West Elliot Road, #106, Tempe
If you love Cajun and Creole food, VooDoo Daddy’s Steam Kitchen in Tempe has your jambalaya and gumbo fix. There’s also red beans and rice, po’boys, etouffee, shrimp and grits, and certainly beignets for dessert. The Tempe Cajun joint also offers a Creole remoulade sauce that is out of this world.