Audio: Kelli Ward Says McSally Should 'Be Quiet' When She Disagrees With Trump

Ward made the comments on June 12 during a Mohave Republican Forum meeting in Kingman. She criticized McSally for publicly splitting with Trump on his threat to impose tariffs on Mexico, saying the senator should have privately expressed her concerns to the White House.

"My wish is that if somebody disagrees with the president from our side, Martha or any of our four Republican congressmen, I wish that they would just be quiet," Ward said. "Or, take it up with the president and his people in private, and don't tweet about 'I had a conversation with the president, and he understands what I said.'"


Ward's criticism of McSally highlights the delicate balance faced by Arizona Republicans who hope to maintain support among Trump's base as well as the moderate wing of the party.

The remarks also point to a potentially awkward dynamic between the two women. One of Ward's primary duties as state GOP chair is defending McSally's Senate seat against Democrat Mark Kelly in one of the nation's most closely watched 2020 races.

The Kingman meeting occurred days after Trump declared victory over a supposed deal with Mexico to avoid tariffs. (The most substantial terms of the agreement were solidified months before the president's threats.)

Prior to Trump's announcement, the proposed tariffs served as a litmus test for Arizona Republicans, forcing elected officials to choose between the state's economic interests and the president's messaging on border security.

McSally broke with state party leaders who supported the president's plan, including Ward and Governor Doug Ducey. "While I support the President's intention of stopping unchecked illegal immigration, I do not support these types of tariffs, which will harm our economy and be passed onto Arizona small businesses and families," she told reporters. 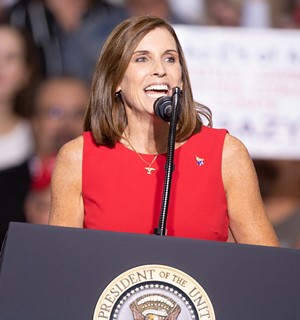 Then-candidate Martha McSally speaks at a Trump rally in 2018.
Jim Louvau
During the June Mohave Republican Forum meeting, Ward was addressing a question on McSally's non-support of Trump's tariff plan when she made the critique of the senator. She noted that several Arizona Republicans jumped behind the president, including herself, Ducey, and pair of congressmen: Andy Biggs and Paul Gosar.

"And so, we came out early because we are the fearless bunch. And sometimes people aren't brave and they're politically worried about how something's going to come out," Ward said, before adding that she wishes those who buck the White House line would "just be quiet" or privately take their disagreements to Trump.

"If you take care of it, along the right channels, you can get things done without causing political harm," Ward said. "And there's nothing that the media and the left like better than a good Republican-on-Republican fight."

Neither Ward nor McSally responded to emails seeking comment.

Ward's comments bring to mind her historically contentious relationship with McSally, who she challenged in the 2018 Republican Senate primary.

During the race, Ward questioned then-Congresswoman McSally's loyalty to the president and labeled her as Jeff Flake 2.0, the former Republican Senator who developed a reputation for denouncing Trump's breaches of decorum while supporting most of his policies.

McSally, who downplayed her record as a moderate Republican, won the primary but lost in the general election to Democrat Kyrsten Sinema. Governor Ducey then appointed McSally to the seat formerly held by the late Senator John McCain.

Now McSally looks poised to run against astronaut and Democrat Mark Kelly in the 2020 Senate race. She does not currently face a primary challenger, though Daniel McCarthy, the founder of a makeup removal company, has floated the possibility of running against McSally.