What to Expect at The Real Wild & Woody Beer Festival 2019

Real Wild & Woody 2019 is the Southwest’s largest indoor beer festival and is presented by the Arizona Craft Brewers Guild — which is in turn is celebrating 30 years of Arizona craft beer. From 2 to 6 p.m., guests of the big ol' beer event are given access to more than 40 Arizona breweries, who are then offering over 350 craft beer samples. But heads up, you’re only allowed 20 samples. The social beer app Untappd will offer the complete beer list as well as additional information on the offered brews.

Participating breweries include Grand Canyon Brewery, Mother Road Brewing Company, and SanTan Brewing Company. Plus, some lesser known breweries are looking for a little exposure, so be sure to check out Flying Bassett, Desert Monks, and Walter Station. 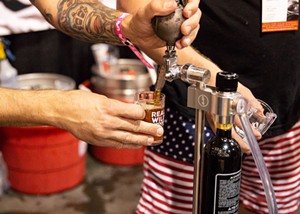 Cider Corps will be pouring at the sixth annual Real Wild & Woody Indoor Beer Festival.
Amanda Mason
There will also be food, live music, and activities like a rock wall. Participating restaurants include Angry Crab, Brat Haus, Cold Beer & Cheeseburgers, Crust Italian, and Green. There are also concessions, as well as a multicourse meals for VIP ticket holders.

“This year, I am especially thrilled to be introducing the VIP experience,” Arizona Craft Brewers Guild executive director Rob Fullmer says in a press release. “It’s going to be a tremendous opportunity for our most fervent fans to have first, full access to the entire venue an hour before we open to the public. Along with the exclusive access, there is a VIP meal option that will provide attendees with a three-taco meal (with vegetarian options) and a dessert. We’ll also be featuring distilled products from some of our breweries exclusively in the VIP area.”

This is a 21-and-over event. General admission is $60, which includes 20 beer samples and small bites, with VIP options ranging from $80 to $100 for VIP+ (where you get the meal). Designated driver tickets are $25.