Royse Contemporary
They're celebrating over at Royse Contemporary in Scottsdale.
It's possible to have fun and save money. This week, you can learn lessons from robotics during a screening of Spare Parts, connect with local creatives during "People, Places & Things," or give your ears a treat at Native American Composers Apprenticeship Project. For more things to do, visit New Times’ calendar.

What can robotics teach kids about life? Find out when Scottsdale Civic Center Library, 3839 North Drinkwater Boulevard in Scottsdale, screens the film Spare Parts, which follows the adventures of four Hispanic high school students in Arizona. George Lopez plays the school’s newest teacher, who heads the newly formed robotics team that takes on the formidable robotics championship team from Massachusetts Institute of Technology. Other cast members include Marisa Tomei and Jamie Lee Curtis.

The PG-13 film, which explores lessons learned in technology and friendship, is based on a true story. Turns out, the kids accomplished quite a lot with just $800 and a bunch of used car parts. The free screening happens from 5 to 7 p.m. on Monday, August 26. Lynn Trimble

Paris-based Iván Argote, an artist who hails from Colombia, often incorporates texts that reflect what he terms “radical tenderness.” Now, he has a new exhibition at ASU Art Museum, 51 East 10th Street in Tempe, where he’ll also be showing a sculptural installation that “considers the current cultural climate in Arizona.” His first solo museum exhibit in the U.S., the show will also include films, videos, additional sculptures, and site-based installations meant to engage viewers on both the personal and political level. See the exhibit between 11 a.m. and 5 p.m. on Tuesday, August 27. Museum admission is free. Lynn Trimble

It’s been two years since Nicole Royse opened her Royse Contemporary gallery in Old Town Scottsdale after years of curating shows around downtown Phoenix. Help her celebrate at the gallery, 7077 East Main Street in Scottsdale, from 7 to 9 p.m. on Thursday, August 29. It’s a chance to connect with local creatives, check out the Scottsdale ArtWalk, and see the “People, Places & Things” exhibit that closes at the end of the month. The eclectic art show includes works in several mediums, including painting, photography, and collage. Featured artists are James Angel, Cam DeCaussin, Cherie Buck-Hutchison, Peter Brian Klein, and Daniel Shepherd. Admission is free. Lynn Trimble

Composer, performer, and installation artist Raven Chacon has an impressive resume, including a showing at the 2017 Whitney Biennial while he was part of the Postcommodity collective. His eyes light up when he talks about assorted sound art installations created in desert and urban environments. But he’s especially passionate about working with indigenous youth. The Diné creative, who was born in Fort Defiance on the Navajo Nation, is helping youth develop musical literacy and music composition skills as part of the Native American Composers Apprenticeship Project. Hear them perform a free concert led by Chacon at the Heard Museum, 2301 North Central Avenue, from 6 to 8 p.m. on Friday, August 30. Doors open at 5 p.m. Lynn Trimble

Get ready for a slappin' good time.
Trill

Graffiti is finally being appreciated for its artistic merits rather than being dismissed as vandalism. Street art has transformed over the last few years due to slap tagging, in which artists distribute their work by placing stickers in public places. Cristina Vanko dubbed the process as “smart vandalism.” Trill will make slap art available to everyone with the Water Tower Slap Show on Saturday, August 31. Attendees will be given their own paper water towers to decorate however they choose. This free, all-ages event features lots of giveaways and music from DJs Psychopat, Fact135, and REFLEKSHIN. 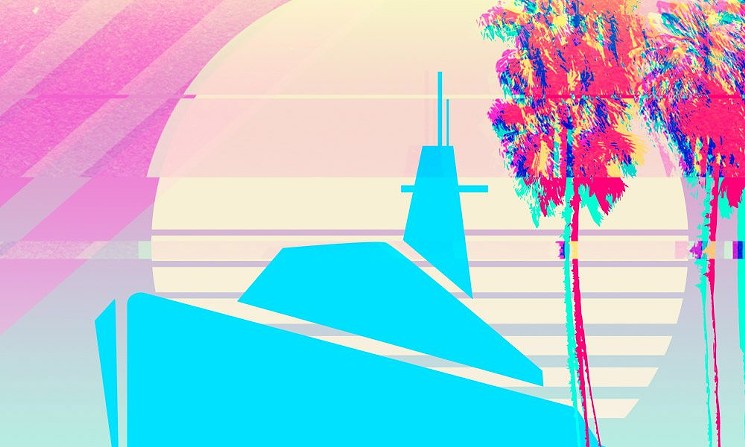 Yacht rock walks a fine line between irony and timelessness. Toto’s “Africa” is catchy as hell, but Sugar Ray’s Little Yachty may have crossed the line. Skipper hats, bell-bottoms, and brightly colored tropical shirts will always be fun.