Elsewhere, Strangelove and This Charming Band will be celebrating the music of Depeche Mode and The Smiths, respectively, while The Blunt Club will throw a party in honor of its 17th anniversary and local jazz act the Mammoth Ensemble pay tribute to the music of Cowboy Bebop.

Other highlights of the Valley’s concert offerings include gigs by Alesana, Bloodshot Bill, BJ Thomas, Markus Schulz, and Skinlab.

Details about each of these shows can be found below. And for even more live music happening around the Valley this weekend, check out Phoenix New Times' online concert calendar. The members of Alesana.
Epitaph Records

To prevent confusion in our readership, Alesana not some drop-dead gorgeous model hailing out of Milan, Italy. Nope. In actuality, Alesana six okay-looking guys from North Carolina who have done the post-hardcore thing with gusto and panache for 15 years. Take the usual experimental leanings of the genre and view them through acoustic and piano-driven goggles. At least Alesana trade vocals among four of the members to keep it varied. Over the last decade and a half, they’ve released five full-length albums, three EPs, and a 2017 box set. Their current tour brings them to Club Red in Mesa on Friday night along with tourmates Capture, Avoid, and Dead Superstar. Locals Embrace the Sun and Sleep for the Weak will open the show starting at 6 p.m.Tickets are $20. Abel Folgar 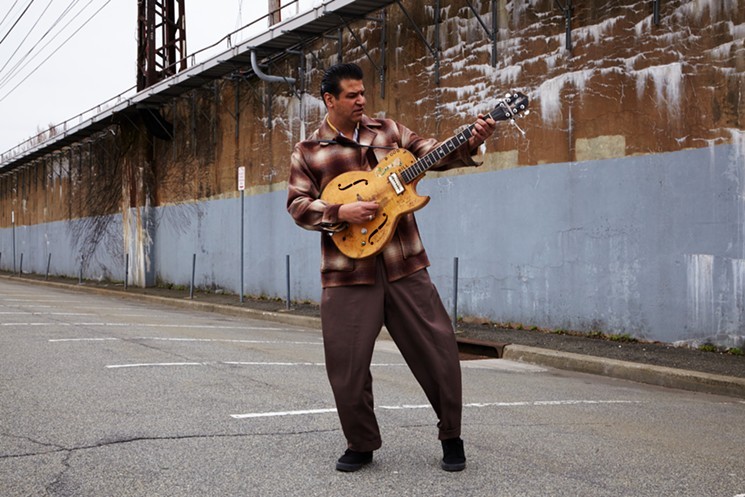 The world needs artists like Bloodshot Bill and his slicked-back hair to remind us what rock 'n' roll is all about. The Canadian one-man band has been releasing albums, EPs, and splits nonstop while constantly touring North America. Even a weird issue in 2006 at the U.S.-Canada border that banned him from the States for five years didn't slow him down.

Inspired by artists such as Hasil Adkins and Charlie Feathers — and collaborations with others like King Khan and Shannon Shaw — the 43-year-old Montreal native truly has encapsulated the sound, look, and energy of rockabilly.

For Bill's live solo shows, his setup is simple. "I have the same bass drum, hi-hat, amp, and vocal ... There's no harmonica, even though it's been reported like that," he shares. Although the setup appears minimal, Bill's energy is wild and loud. His vocals involve lo-fi roars, yelps, and hollers reminiscent of old-school blues and country. It’s a show worth seeing at the Rhythm Room on Friday night. Savage Gospel, The Limit Club, and Tin Can Screamers open the evening, which begins at 8 p.m. Tickets are $12. Catherine Toruño

One of the Valley's most notable jazz acts, the Mammoth Ensemble, bringing audiences their interpretation to the score of the 1998 anime classic Cowboy Bebop. Intergalactic Japanese bounty hunters in sharp suits are quite cool as is, but that coolness stretches for dozens upon dozens of light-years through a musical lens. See you, Space Cowboys, at Crescent Ballroom. The Mammoth Ensemble will park their starship at Crescent Ballroom at 8 p.m. Tickets are $15. Michael Palladino

The only constant in Markus Schulz’s life . Trance music is regularly part of his day, but sometimes it’s dark and other times bright. In 2017, under his Dakota alias, Schulz offered The Nine Skies. “That album came from a dark place, but in time, you realize enough is enough and we [of dance-music culture] need to be the light,” Schulz says.

This ever-changing self-expression and venting approach to music never stops. His original productions are reactive to world events. He tells stories in his 12-hour DJ sets, and a weekly podcast is in tune with the seasons. Some musicians enter the studio to make sick drops, and others tell stories — Schulz is the latter.

Schulz is a familiar name to veterans of the local club scene, as he spent the formative years of his DJ career performing at legendary Scottsdale nightclub The Works (read more about the place here). He returns to the Valley for a gig at Shady Park in Tempe on Friday. Sean & Xander, Danny Stephen, and Ericksii will open the evening at 9 p.m. Tickets are $25. Elvis Anderson 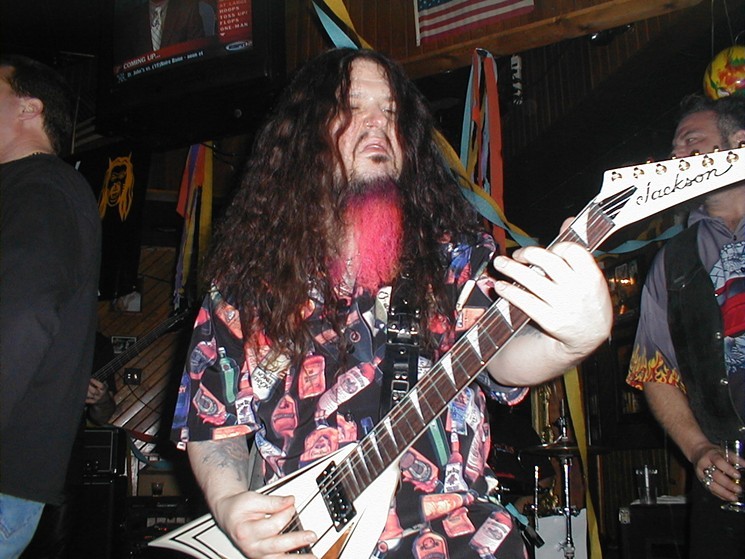 For more than a decade now, metalheads around the Valley have gathered every August to celebrate the life and music of "Dimebag" Darrell Abbott, the late guitarist of Pantera. Here in the Valley, the event was known as the annual Dimefest and took place the past several years at north Phoenix rock bar and hesher haven Joe’s Grotto. This year, however, the party will raise a toast to Dimebag’s dearly departed brother, Pantera frontman Vinnie Paul Abbott, who died last year.

Now known as Abbott Fest, it will feature performances by a half-dozen bands at Joe’s Grotto. As in years past, expect to see hard-hitting local musicians paying tribute to the Abbotts with deep metal grooves, shred- riffs, and powerful vocals. We expect to see some Pantera jams along with plenty of original material. The lineup includes sets by locals like Sectas, Prepare the Gallows, Black Wolf Mountain, Exiled, and Some F-ing Band. Rock out starting at 7 p.m. Tickets are $10 in advance, $12 at the door. Lauren Wise

DJ Tricky T is scheduled to perform at The Blunt Club's anniversary on Saturday.
Benjamin Leatherman

Hip-Hop has exploded in popularity over the last few years, and its influence is everywhere, from Kendrick Lamar winning the Pulitzer Prize to Beyoncé and Donald Glover starring in The Lion King reboot (well, their voices, but you get our point). The rest of the world may (finally) be catching on to hip-hop’s awesomeness, but it’s nothing new for the Valley’s longest-running hip-hop night, The Blunt Club.

Get into the groove during The Blunt Club’s 17-Year Anniversary at Crescent Ballroom on Saturday, August 24, from 10 p.m. to 2 a.m. This 21-and-over event is free and includes a live performance by The Stakes with resident DJs Pickster One, M2, Tricky T, Fact135, and Melo in the mix. Melissa Fossum

The music world’s first taste of BJ Thomas came with his cover of Hank Williams Sr.'s "I'm So Lonesome I Could Cry" with his original band, The Triumphs. He'd go on to the bright lights of the recording industry within a decade, teaming with pop maestro Burt Bacharach for "Raindrops Keep Falling on My Head," the musical calling card of Paul Newman and Robert Redford's classic buddy flick Butch Cassidy and the Sundance Kid.

Later on, hits like "Hooked on a Feeling," "I Just Can't Help Believing," and "(Hey Won't You Play) Another Somebody Done Somebody Wrong Song" installed Thomas in the pantheon of grinning, nice-guy singer-songwriters. By the early '80s, he was juggling fans of his countrypolitan, rock, and gospel output, after a more spiritual calling saw him praising the Lord and leaving behind the nightlife. The man can turn out a helluva — we mean heckuva — version of "Amazing Grace." His performance at Talking Stick Resort in Scottsdale starts at 8 p.m. Tickets are $25 to $65. Chris Gray


Strangelove and This Charming Band

From leather jackets to vintage synths, Strangelove's tribute to Depeche Mode is heavy on the details and made for hardcore Modies. Singer Freddie “Devotional Dave” Morales not only does a spot-on impersonation of Dave Gahan's croon, but he also nails the hip-swivels. Once he grabs that microphone stand and spins, you will question your ability to tell the difference between the tribute band and the real thing. Strangelove's resemblance, both visually and sonically, to Depeche Mode is amazing. This weekend, they’ll amaze a nostalgia-seeking audience inside the Chandler Center for the Arts. They share the bill with Smiths tribute act This Charming Band. The show starts at 7 p.m. are $19.89 (natch). Liz Ohanesian 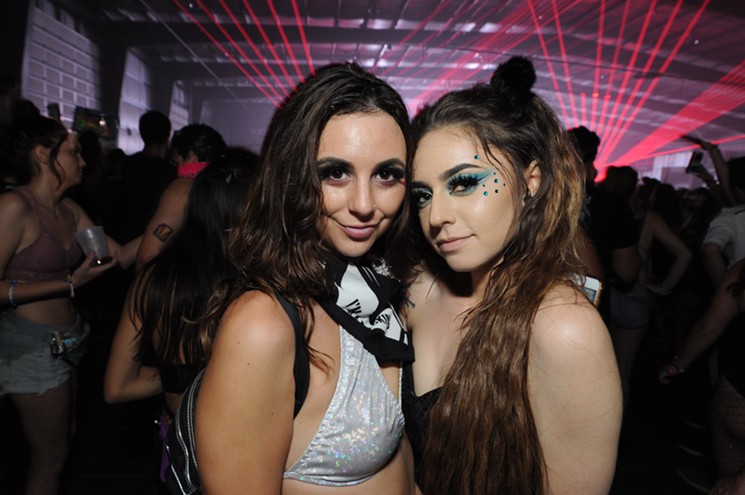 Bass music has a funny effect on certain people. Not only does it have a tendency to get hearts pounding, fists pumping, and eardrums rattling, but electronic dance tracks that are heavy on booms, low-end blasts, and sub-harmonic sounds have a way of making bodies move harder, faster, and stronger. There’s even a scientific study from years ago stating that bass-heavy music makes listeners feel more powerful. (Remember that scene from Breaking Bad where Walt revved up his new hot rod while Knife Party’s “Bonfire” played?)

Then there are those folks who just dig bass and lots of it. They will hit up EDM gigs where the speakers and subwoofers are rattling with dubstep, drum ’n’ bass, or genres of that ilk — like at Bassrush Massive Arizona 2019 on Saturday, August 24, at Rawhide Event Center. As its name implies, the festival focuses on bass-oriented sounds like , trap, future bass, the multiple flavors of dubstep, and similar genres. Naturally, all the DJs and producers scheduled to perform at the event — including Flux Pavilion, Black Tiger Sex Machine, Herobust, Riot Ten, Marauda, Zeke Beats, Sharps, Mike Dao, and Bigstabes — are big into the wub- some form or fashion. The bass starts blasting at 6 p.m. and doesn’t stop until 2 a.m.  General admission is $69 and VIP tickets are $89. Benjamin Leatherman

In another age, Skinlab might be playing bright-sheen post-biker metal à la Iron Maiden. They are with us in the here and now instead. And so, they play a mix of nu-metal and hard rock. They pretty much rule at it, too. Skinlab play with a conviction and intensity that bands like P.O.D. and Papa Roach couldn't even fake well, and it will probably mean a lot to a fair number of people. They exemplify a thing somewhat bigger than the tropes to which nü metal's marketers routinely reduce it. They are worth watching. See for yourself when they hit Club Red in Mesa on Sunday night with Arrival of Autumn, , Zherra, and Agnostic Purgatory. The metal madness starts at 6 p.m. and tickets are $16. John Darnielle