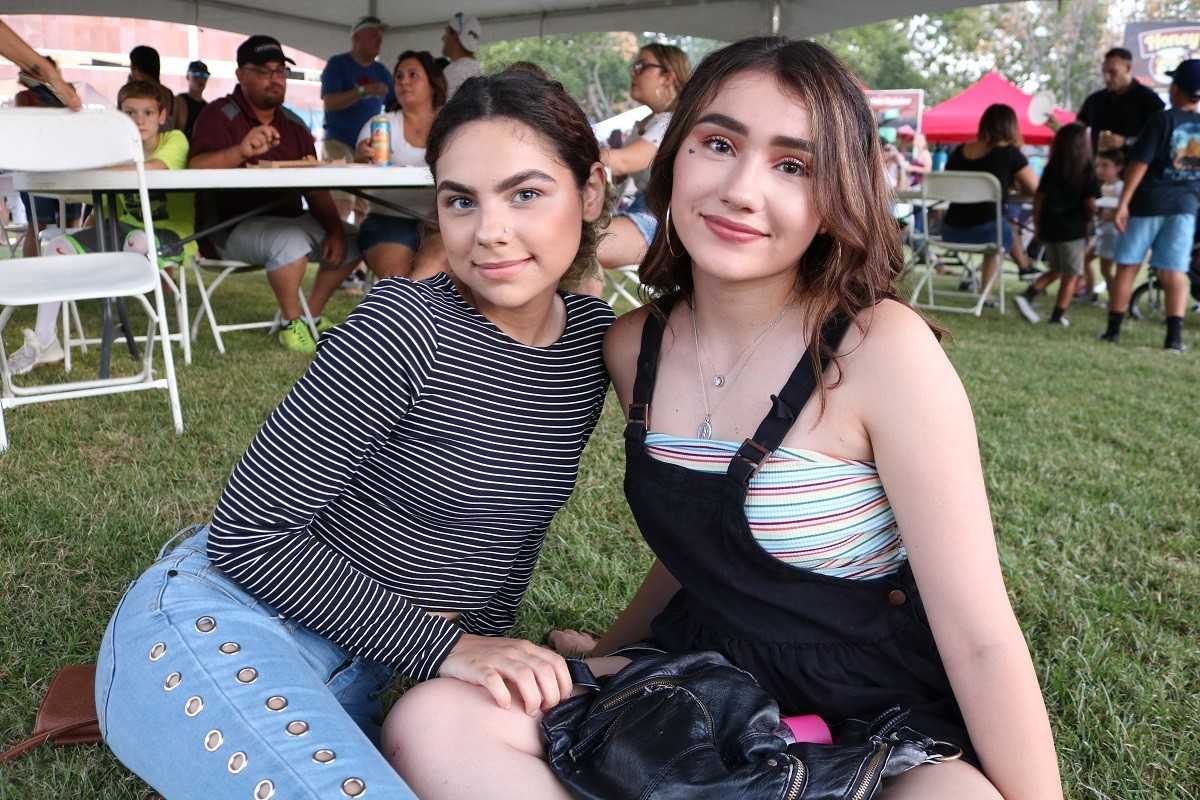 History is filled with badass women whose stories often go untold. Now, one local artist is shining a light on Latina women, with an exhibition of artworks called “Badass Latina Women.” It’s filled with artworks that reveal her perspective on iconic Latina women and remind viewers of the struggles they have overcome through the years.

Featured artist Vanessa Ortiz hopes her work will inspire fellow Latinas of all ages to embrace their uniqueness while recognizing their beauty and talents. The free opening reception, where you can see works by nine additional artists, happens from 6 to 9 p.m. on Friday, September 13, at The Millet House, 440 West First Street in Mesa. The exhibit continues through Thursday, October 31. Lynn Trimble

Dodge & Fuski
Courtesy of the artist

Remember how fun it was to play with finger paint as a kid? What if you could take it even further by transforming your body into a canvas during a rave?

Make your childhood dreams come true during the Wyld Paint Party, a rave with a huge lineup of DJs including headliners Dodge & Fuski, Carbin, and Blaize.

Put on your best swimwear and prepare to get absolutely doused in neon paint on Friday, September 13, at 9 p.m. at The Pressroom, 441 West Madison Street. Admission to this 18-and-over event starts at $20. Price tiers include goodies like T-shirts, paint tubes, and foam sticks. Melissa Fossum

The theme to The Drew Carey Show led us to believe that the city of Cleveland does, in fact, rock. Today, nobody evangelizes the Rock and Roll Capital of the World quite like Ramon Rivas. Just check out his Viceland spot where he tries to entice New Yorkers to move to Cleveland to save some money on rent. 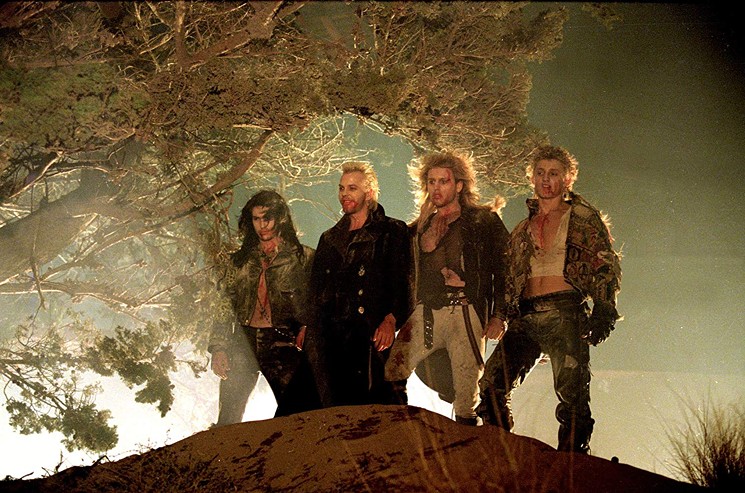 The movie of the ’80s.
Warner Bros

The Lost Boys may be the definitive movie of the ’80s. It has it all — the two Coreys, meticulously coiffed hair, summertime beach romance, supernatural terror, and Kiefer Sutherland’s role as a party monster vampire. And who can forget the greased-up shirtless saxophone player?

The fun starts at 7 p.m. at 4955 South Arizona Avenue in Chandler. Tickets are $10.50. Children ages 6 and up will only be admitted with an adult. Melissa Fossum When he was just 9 years old, Javier Zamora traveled alone from El Salvador to the United States to be reunited with his parents. The 4,000-mile journey he undertook in 1999 informed his first poetry collection, titled Unaccompanied, and his work with the Our Parents’ Bones Campaign, which seeks justice for those whose family members disappeared during El Salvador’s civil war.

Zamora will be reading from his book at Palabras Bilingual Bookstore, 1738 East McDowell Road, from 5 to 6:30 p.m. on Saturday, September 14. It’s being presented by the Virginia G. Piper Center for Creative Writing, where Zamora will teach a class earlier that day. The reading is free, but you should register online before attending. Lynn Trimble 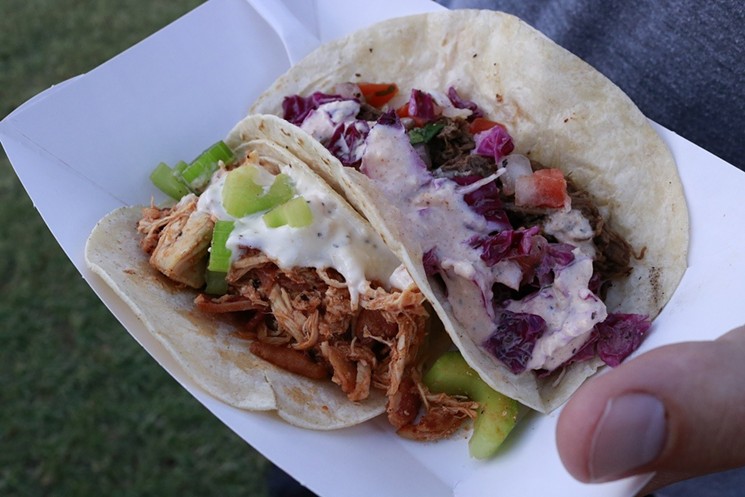 These tacos from Hungry Monk are delicious.
Michelle Sasonov

If you’re only eating tacos from the cheapest fast food joint in town, then you’re doing it wrong. The Rockin’ Taco Street Fest, happening from noon to 9 p.m. on Saturday, September 14, can help you expand your culinary horizons with creative tacos from more than a dozen local restaurants and food trucks. Expect plenty of other food options, from elote to churros. Drink choices range from margaritas to horchata. Ever wonder what happens behind the scenes here?
Courtney Sargent

Most people head straight for the bar or the bathroom when they get to their favorite theater (unless they’re eager to get right to their seats). That means they’re overlooking some of the more interesting parts of the venue. Guided tours can help make sure you’re not missing the little details in your haste to get settled in for a show.

The Herberger Theater Center, located at 222 East Monroe Street, is offering a free four-story tour of theater performance spaces at 10 a.m. on Saturday, September 14. It’s a great way to learn more about the building’s history, and discover areas you might not have explored before, such as the art gallery that often shows works by local artists. Lynn Trimble 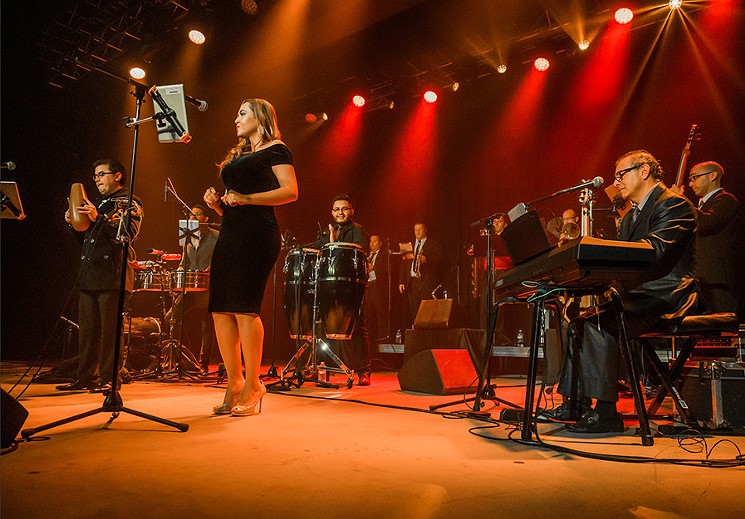 Look for Jaleo at Scottsdale Center for the Performing Arts.
NightFuse

When Gerd Wuestemann became the new president and CEO of Scottsdale Arts in early 2018, he talked about wanting to expand existing programs and create new initiatives. The longtime musician and arts leader, who holds a doctorate of musical arts from the University of Arizona, has already increased the focus on local musicians through a performance series called Live & Local.

The next concert in the series features Jaleo, a Scottsdale band that performs various styles of Latin music, including cumbia, salsa, merengue, and more. Founded in 2007, the band also brings a Latin twist to American pop standards. Jaleo: CubaCaribe happens on Saturday, September 14, at Scottsdale Center for the Performing Arts, 7380 East Second Street in Scottsdale. Tickets to the 8 p.m. performance start at $15. Lynn Trimble Part of an exhibit at the Arizona Heritage Center in Tempe.
Lynn Trimble

‘Art of the Internment Camps: Culture Behind Barbed Wire’

Nearly 125,000 Japanese-American citizens living on the West Coast in 1942 were forcibly removed and sent to internment camps after President Franklin Delano Roosevelt signed an executive order. Photographers including Dorothea Lange and Ansel Adams documented these internments, and several artists created art reflecting life inside the camp.

Winnie Ruth Judd, a.k.a. “The Trunk Murderess,” is one of Arizona’s most infamous and fascinating residents. In 1931, she allegedly killed two romantic rivals, then took their bodies to Los Angeles in trunks.

It gets even more interesting from there — Ruth was found guilty of murder, and sentenced to death. She plead insanity and spent a few years at the Arizona State Mental hospital, where she subsequently escaped at least six times. She was paroled in 1971 and died of natural causes at 93. The Miraculous Journey of Edward Tulane

Everyone has their own story of being lost and found, which is why The Miraculous Journey of Edward Tulane resonates with audiences of all ages. It’s based on the book by Kate DiCamillo, which imagines the adventures of a beloved toy and the life of the young girl who lost him.

The Childsplay production is a poignant and charming exploration of life’s misadventures, amplified by stunning sets, costumes, and lighting. See for yourself on Sunday, September 15, when the show starts at 1 p.m. It’s being performed at Herberger Theater Center, 222 East Monroe Street. It’s best for ages 7 and up. Tickets start at $15. Lynn Trimble Stretch it out.
Sara Sachs/Arizona Diamondbacks

Going to an Arizona Diamondbacks game is always a good time, especially when the roof is open. Very few fans will have an opportunity to walk onto the field, let alone stretch out into downward dog. Yoga at Chase Field allows fans to enjoy a post-game one-hour instructor-led yoga class. A kids’ class is also offered.

Stretch it out at 401 East Jefferson Street on Sunday, September 15, at 5 p.m. Tickets to yoga also grant admission to the 1:10 p.m. game versus the Cincinnati Reds and a special edition D-backs yoga water bottle. All-ages tickets start at $25. Melissa Fossum