Marc Funnell
Vic Clinco says he owns the largest collection of hot sauce bottles in the world.
Walking into Vic Clinco's home is an experience. Every side of his living room wall, from ceiling to floor, is lined with shelves of hot sauce bottles, in all sizes and shapes, from pocket-size Cholula to a glass skull containing a high-priced spicy concoction. An accidental hobby has evolved into a hot sauce museum. He has bottles ranging in cost from 79 cents to thousands of dollars — right in the west Valley.

"I have the largest collection of hot sauces in the world," Clinco says. "I think I am nearing 9,000 bottles."

His obsession with all things spice began in childhood. "I've always liked spicy food as long as I can remember," he says. "I think a lot of people's eating patterns take after the folks that they grow up with and are around. I can remember my dad and grandpa eating jalapeños and putting red chili flakes on absolutely everything. I think that is where it started."

Therefore, the love of hot sauce became an extension of his childhood. Hot sauce is an easier vessel for spicy tastes, as he puts it. "I just enjoyed the flavors. It then became a quest to find spicier and spicier, tastier and tastier," he says. 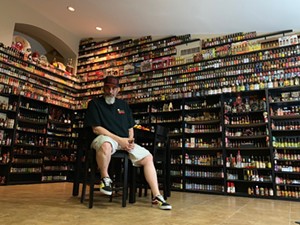 Hot sauce is definitely a passion for Clinco.
Marc Fennell
Clinco discovered he had a natural propensity for spice at a young age. As a 6-year-old, he would try jalapeños from his grandfather's backyard in New York. When his family moved to Florida in sixth grade, he recognized the food culture surrounding him — everything from Caribbean and Spanish to Cuban cuisine.

"There were all kinds of hot sauces to try. My passion for hot sauce blossomed there," Clinco says. His parents never limited Clinco's push to try new ones either. "The hotter I wanted to go, they'd say, 'Good luck.'" And through these tastings, he discovered in his mid-teens he had a high tolerance for spicy foods.


Naturally, what started as a childhood pastime became an unexpected and serious hobby as an adult.

Clinco met his wife, Wendy Clinco, 22 years ago. She gave him six or seven hot sauces for their first Christmas together. After the unwrapping, he placed them in the breakfast nook. He had already begun collecting spicy memorabilia. From that point, collecting became purposeful, and he started wondering what was out there.

One source of inspiration was Jennifer Trainer Thompson's The Great Hot Sauce Book, which he used as a hot sauce bucket list. "I wanted everything in that book. It really opened my eyes that there were people around the world collecting," he says. That moment, around age 30, is when Clinco recalls how collecting blew his mind, as he phrases it. It then became a treasure hunt for hot sauces everywhere. 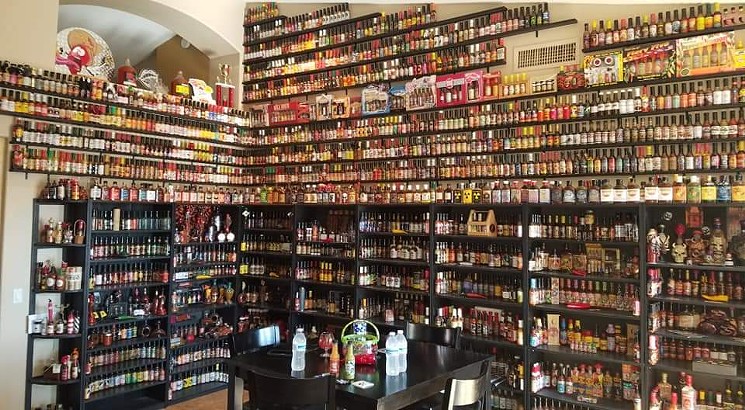 The passion for hot sauce started young.
Marc Fennell
So, how did a few hot sauce bottles multiply to thousands of bottles in his living room?

"As the internet came into play, there were hot sauce blogs. At that time I would meet with other collectors, 'chile heads,' and manufacturers of hot sauce," Clinco says. His first collection of hot sauce bottles originated in his Orlando home on little shelves. The walls were covered.

Clinco wants to be clear that it has never been a race for him. And it still isn't. "It is cool that I have the largest collection, but it was never a goal. It just really kind of happened," he says. Clinco credits his wife for allowing his collection to multiply, admitting, "There is no way that I would be able to do this without her."

He says his wife goes back and forth on whether she wants the living room space to be "normal" and entertains the idea of it being a wine room. But as of now, it doesn't appear Wendy's wine room will become a reality anytime soon.

Clinco's collection grows every month. (He opened two boxes from Australia and New Zealand during the week of our interview.) He doesn't necessarily offer reviews of hot sauces, but happily advises on the taste of a particular kind, finding the right bottle, and recommends color combinations on labels and neck rings. Clinco and his wife often travel around the country visiting hot sauce shows, everywhere from New York City to Portland, Oregon. His curation occurs when he isn't working his day job at U.S. Foods.

Clinco also has made a local community with fellow hot sauce connoisseurs, as there are about 20 hot sauce makers in the Phoenix area. He's made several hot sauce-loving friends via social media, too. Clinco curates an Instagram account called Pepperboy143. He's closing in on almost 10,000 followers and is astounded by virtually meeting people from New Zealand, Slovakia, and other places through social media. He eventually wants to collaborate with chefs and build a network of people who enjoy everything hot sauce. He considers himself a brand ambassador and is happy to feature a manufacturer or specific hot sauce on his Instagram. 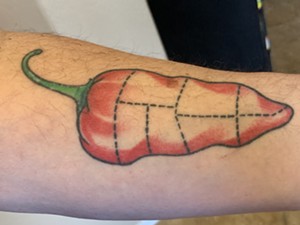 Clinco has a chile pepper tattooed on the inside of his arm.
Rudri Bhatt Patel
Clinco has simple rules on what makes a good quality hot sauce. "In my humble opinion, you should be able to read and understand what the ingredients are. It's garlic, onion, chili pepper, vinegar, and salt. When you get into ingredients you cannot pronounce, then I am pretty much out. I will try everything, but I may not come back and try it again."

The way he tries hot sauce is unique. He's considers himself a purist. "I try to stay as clean as possible. I don't use a metal spoon. I use a plastic spoon or my hand to try a hot sauce," he says. He wants to know what a sauce tastes like before he adds the flavor of a tortilla chip. Clinco looks for good flavor balance when trying a hot sauce and doesn't necessarily need to have overwhelming heat to appreciate it.

The biggest challenge for Clinco right now is space. He bought his house thinking he would have more shelf room in his living room. "I've already outgrown the space and don't know what I will do next," he says. "It is going to get massively too big."

What Clinco knows for sure is his love for hot sauce isn't going away anytime soon. The chile pepper tattoo on his inside forearm serves as a reminder. And hot sauce is intensely personal for Clinco. Every time he tells his hot sauce stories he is reminded of good memories of his dad and grandfather.

"When I tell these stories about hot sauce, it hits home," he says. "It feels good."