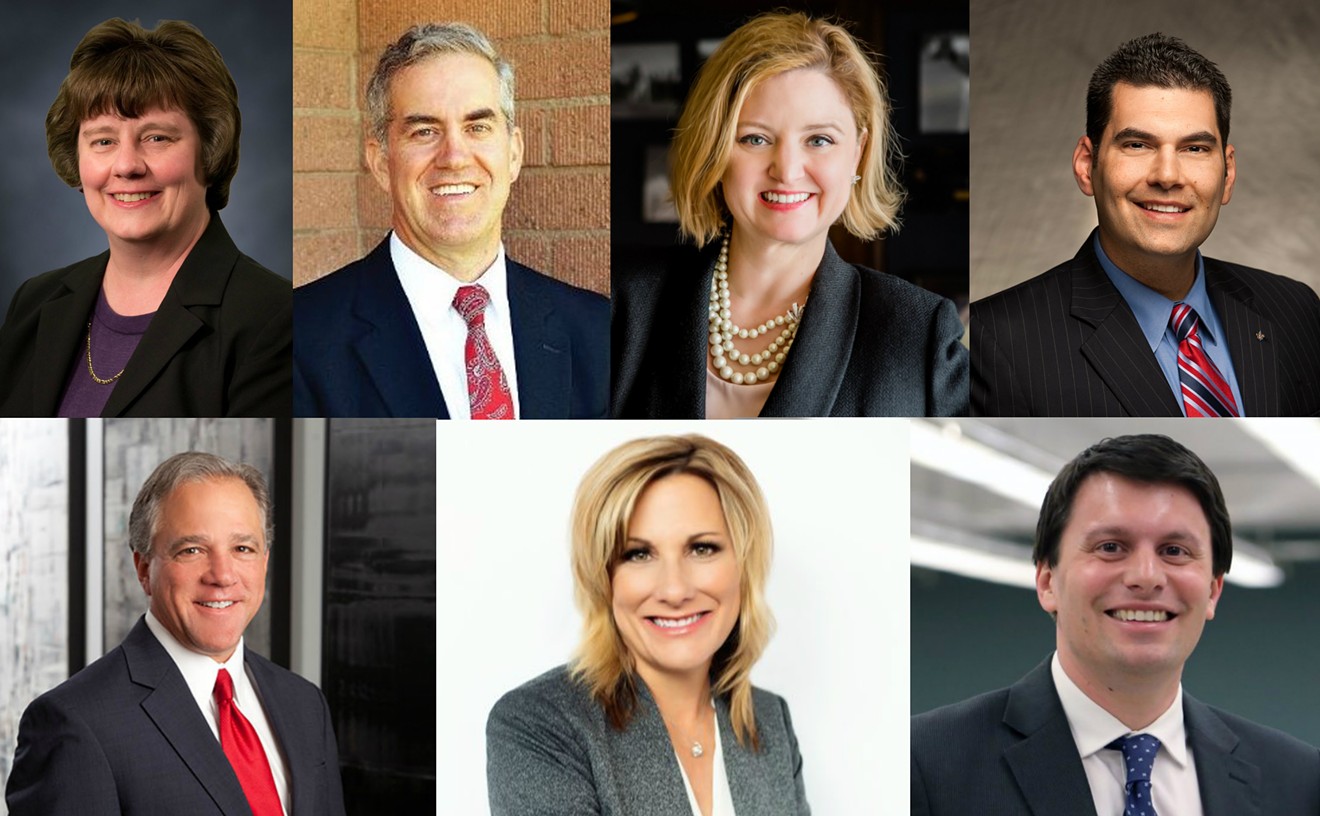 Via social media
Top row, left to right: Rachel Mitchell, Jon Eliason, Allister Adel, Rodney Glassman. Bottom row, left to right: John Kaites, Gina Godbehere, Chris DeRose. Not pictured: Lacy Cooper.
A veteran sex crimes prosecutor, a New York Times bestselling author, a lawmaker-turned-lobbyist who tried to purchase the Phoenix Coyotes: One of these people, or five other applicants, could be the next county attorney for the fourth most populated county in America.

Now that Governor Doug Ducey has given former Maricopa County Attorney Bill Montgomery a seat on the state's highest court, the county Board of Supervisors must find his temporary replacement. Last week, the Board of Supervisors put together a seven-member citizens committee tasked with reviewing applications for Montgomery's old job.

All the applications came in by 5 p.m. on Wednesday, and the committee will send some of the applicants onto the board by October 1. The five-member board will then select one of the applicants to carry out the role of county attorney for the remainder of Montgomery's term, which ends January 2021. All applicants must be a registered Republican (like Montgomery) who live in Maricopa County and are a licensed attorney. All eight say they plan to run for county attorney in 2020 if appointed.

The eight applicants are:

1. Rachel Mitchell: Most well known for her widely criticized role in the Brett Kavanaugh confirmation hearings last year, Mitchell was in charge of the Special Victims Division at the Maricopa County Attorney's Office for over a decade. Following a series of behind-the-scenes office drama, Montgomery bumped Mitchell to the second-in-command position in August, paving the way for Mitchell to fill in for Montgomery since he submitted his resignation on September 5.

2. Jon Eliason: Head of the Major Offenders Division at the County Attorney's Office. Eliason has been eyeing Montgomery's seat since April, when a Phoenix New Times reporter overheard Eliason say at a coffee shop that his best shot at county attorney would be to get an appointment from the Board of Supervisors.

3. Allister Adel: A former prosecutor for the County Attorney's Office, Adel previously worked in the vehicular crimes, gang, and drug enforcement bureau before working as a lawyer for the Arizona Department of Transportation and the Department of Child Safety. She highlighted prosecuting a case "where an illegal immigrant killed a Phoenix Police Officer" on her resume, and exalted the job Bill Montgomery has done, despite the fact that Montgomery has faced heavy criticism from civil rights groups for allegedly covering up misconduct in his office. Adel has worked as a consultant for small businesses and nonprofits since leaving the Department of Child Safety in 2015.

4. Lacy Cooper: Now General Crimes Section chief at the U.S. Attorney's Office in Phoenix, Cooper has worked for the U.S. Attorney's Office since 2013. Before that, she worked at the Gila County Attorney's Office as a senior deputy attorney. "Justice is not about accumulating sentences," Cooper wrote in her application. "Justice is about protecting the rights and dignity of crime victims. It is about keeping the community safe. It is about ensuring a fair process and respectful treatment for all defendants. It is about swiftly disposing of matters referred for criminal prosecution for which the burden of proof cannot be met. ... It is about finding the criminal consequence that best reflects the severity of the offense."

5. Chris DeRose: Currently in private practice specializing in civil litigation, DeRose is also a New York Times bestselling author with four books under his belt. In 2018, he had a short stint as Clerk of the Superior Court for Maricopa County before losing in the Republican primary election to Jeff Fine. Before that, in 2015, he worked as senior litigation counsel for the Arizona Attorney General.

6. Rodney Glassman: He is an attorney for the private law firm Beus Gilbert PLLC, specializing in — as Glassman put it on his resume — "supporting C-suite leaders in pursuing opportunities dealing with challenges." Glassman is also a major in the U.S. Air Force Judge Advocate General's Corps Reserve. Glassman doesn't seem to have much prosecutorial experience, as his resume lists an assortment of roles like director of public sector solutions for waste management in Arizona and New Mexico, city councilman in Tucson, real estate broker, and acting manager of the town of Cave Creek, Arizona.

7. Gina Godbehere: Another County Attorney's Office employee, Godbehere is the northwest Valley bureau chief in the Community Based Prosecution Division. She has been a prosecutor for over 20 years. All applicants were asked to list any lawsuits they had been named in concerning their work as an attorney; Godbehere, like most others had at least one to list, but Godbehere's notably involved a wrongful-death lawsuit. The lawsuit was brought in 2000 and involved a person who was murdered by a defendant on probation. The complaint was dismissed.

8. John Kaites: A former lawmaker who's worked as a private-practice attorney and lobbyist, Kaites works for a firm that specializes in global security, business, and finance. Kaites has also previously worked as a prosecutor in the County Attorney's Office, and as an Arizona assistant attorney general in the organized crime and racketeering division. Kaites served in the Arizona State Legislature from 1993 to 1998, where he was chairman of the Senate Banking and Insurance Committee and the Senate Judiciary Committee. In 1998, he infamously lost the Republican primary for state Attorney General. Kaites highlighted his experience creating diversion programs, restorative justice programs, rewriting criminal code, and reforming the juvenile justice system in his application.

Members of three local criminal justice reform groups — The American Civil Liberties Union of Arizona, Puente, and Lucha — delivered a letter signed by dozens of advocacy groups and lawmakers to the Board of Supervisors on Wednesday. The letter urged the board to appoint a county attorney who will pledge not to run in 2020. However, all of the applicants have said they would run in 2020 if appointed.

The letter also urged the board to appoint a county attorney who will commit to fairly investigating claims of prosecutorial and police misconduct, and who will turn over public records without needing to be sued to do so. Additionally, advocacy groups have asked the board to pick a county attorney who does not, as Montgomery had, actively work against criminal justice reform by lobbying against reform bills.