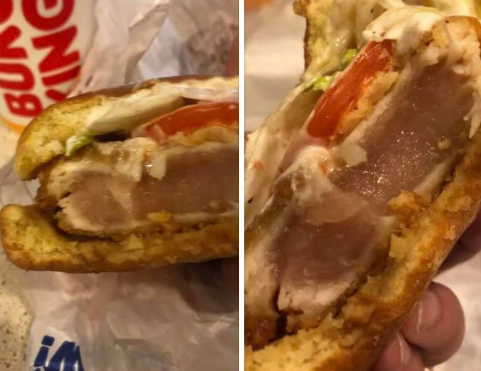 A Burger King in Buckeye served a customer a raw chicken sandwich, a manager at the fast-food restaurant confirmed. The manager who answered the phone said a customer got her money back after she was served the sandwich.

The customer, Paula Piccoli, posted a photo of her sandwich on Facebook, which was later shared by acquaintances on Twitter and a Reddit page devoted to Phoenix.

"DON'T eat at the Burger King in Verrado. My daughter received a RAW chicken sandwich. Unfortunately, she ate a portion of the sandwich before she figured this out," Piccoli wrote. "Hoping she does not get sick. Seriously how does this happen."

Piccoli did not respond to request for comment, but Andres had an explanation for the under-cooked chicken.

"What happened is there are two chicken timer cooks, and they must have put the wrong timer for that specific sandwich," he said.

Neither did Burger King's corporate spokesperson.

Hey @Wendys I know it’s hot in AZ but wanted to tell you this is how @BurgerKing likes to serve sandwiches at one of their locations. My friend’s four-year-old took a bite into raw chicken. You’re just clever and I wanted to share. #wendysforlife pic.twitter.com/MdCg8TO9gI

The Burger King in question is located at 19590 West Indian School Road.