But as recently as September, MakeUp Eraser continued to import makeup removal cloths and other products from Chinese suppliers, according to customs data collected and released by the trade intelligence firm Panjiva.

On top of the company's failure to meet its domestic production pledge, MakeUp Eraser last year reached a civil settlement in California over a claim that a cosmetic bag sold by the business contained a chemical known to cause cancer and problems with male reproductivity.

Revelations about McCarthy's business come as he faces criticism for off-kilter remarks made during his primary bid against Republican Senator Martha McSally, who he is challenging from the right.

Not long after announcing his candidacy in August, McCarthy made national headlines for proposing to annex to Mexico. A couple weeks later, he wrote a Facebook post appearing to compare himself with Jesus Christ.

Reached on Wednesday, McCarthy's Senate campaign forwarded to Phoenix New Times a statement from MakeUp Eraser that did not address its apparent failure to make all of its products domestically by 2019. Instead, the company touted its success in "giving consumers an alternative to the 1.3 billion wipes that are used daily."

The statement continued: "MakeUp Eraser is an American company, founded in Arizona, and our pledge to the consumer and the community as a whole is to continue our mission to be a pioneer in sustainable products."

Launched in 2013 by Daniel McCarthy and his wife, Elexsis McCarthy, MakeUp Eraser sells a reusable, polyester-blend cloth that removes makeup with warm water. The idea for the company came to Elexsis McCarthy when she realized that a wet robe gifted by her mother-in-law effectively removed her makeup, the married entrepreneurs have told reporters. On top of its patented makeup remover, the company's product line also includes cosmetic bags that contain sets of cloths.

In interviews, the McCarthys have been open about importing goods made abroad. The couple told the Arizona Republic in 2016 that their product line included 25 items made in Asia.

But MakeUp Eraser last year announced that it would join a growing movement toward domestic manufacturing. In a blog post published on the company's website on April 17, 2018, MakeUp Eraser claimed it was on track "to be manufacturing fully in the USA by January 2019." The post also claimed that it was slated to sew its first batch of makeup removal cloths on American soil in May 2018.

MakeUp Eraser does not appear to have met its timeline for "manufacturing fully" in the United States.

MakeUp Eraser has received products from Chinese companies as recently as September.

According to customs data, MakeUp Eraser on September 4 received a shipment of towels totaling more than 5,000 pounds from Shijiazhuang Meienbang Import & Export Trade Company, a supplier based in Heibei Province in China. Panjiva indicates that the products were marked as "MAKEUP ERASER DELUXE SAMPLE CASE PACK 50."

Shijiazhuang Meienbang touts "20 years of professional production towel experience" on its online market page found on Alibaba, the Chinese e-commerce site that is often compared to Amazon. The page is back-dropped by a stock photo of a woman on a beach, amateurishly-altered to make the model appear as if she is holding a towel that reads "DRIVE FAST, Eat ass" in NASCAR font. 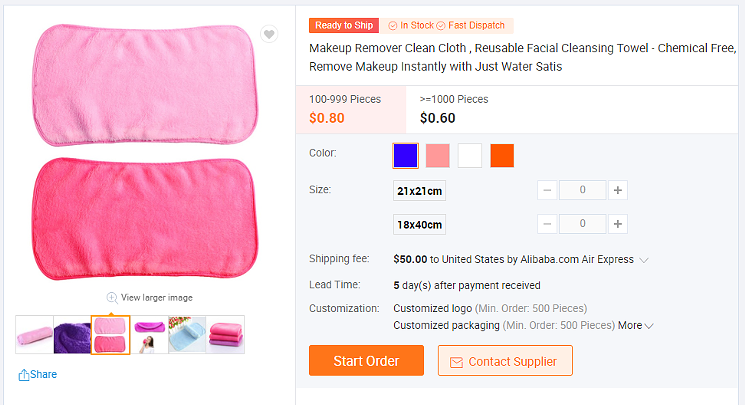 MakeUp Eraser's pink cloth, meanwhile, sells for $20 a piece on Amazon, where it's advertised as lasting for 1,000 uses. Here's what the cloth looks like on Amazon: 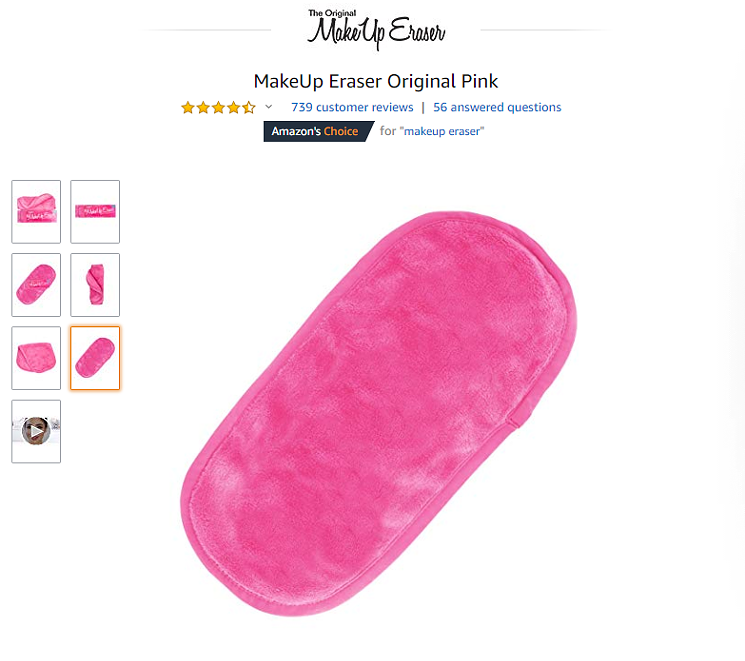 Panjiva's data shows that on July 13, 2019, MakeUp Eraser received a shipment totaling more than 11,000 pounds of microfiber towels from Hebei Laibang, another towel manufacturer based in Hebei Province.

Hebei Laibang sells its cloth for between $0.19 to $1.99 with a minimum order of 500. Here's what that product looks like on Alibaba:

MakeUp Eraser has also received shipments from Chinese suppliers that sell other products similar to ones sold by the Arizona company. Xiamen Sharetrade Import and Export Company shipped to MakeUp Eraser about 1,600 pounds worth of cosmetic bags on November 18, 2018.

Among the products sold by Xiamen Sharetrade is a watermelon-themed makeup bag that it sells for $2.20 each for buyers purchasing between 500 to 4,999 pieces. Here's what the watermelon bag looks like on Alibaba: 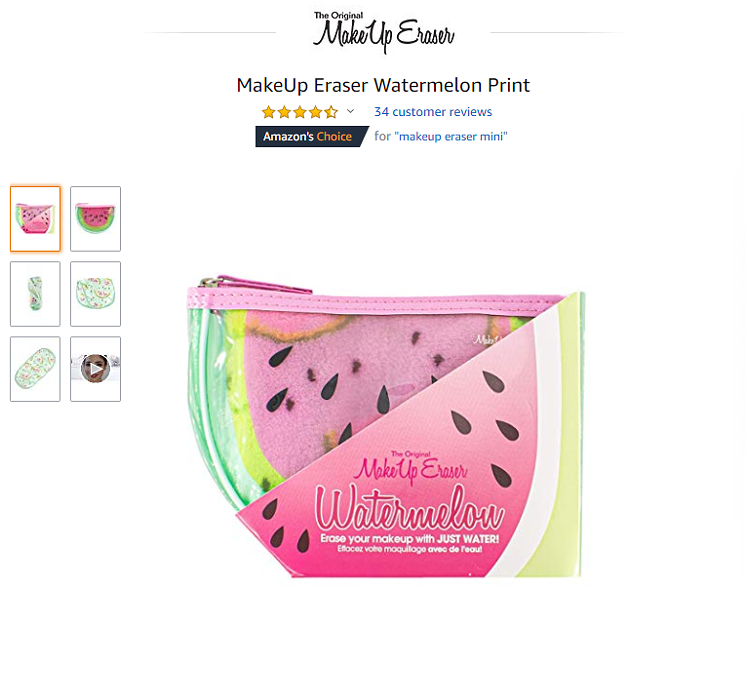 The MakeUp Eraser Watermelon Print.
Amazon.com
MakeUp Eraser's makeup bags this year led to a legal settlement in California, where advocates filed complaints accusing the company of exposing consumers to di(2-ethylhexyl)phthalate (DEHP), a chemical known to cause cancer and developmental male reproductive toxicity. According to notices of violations, MakeUp Eraser's watermelon-themed bag, as well as another bag emblazoned with flamingos, contained DEHP.

The violation was settled under Proposition 65, a California law that requires companies to label products that can expose consumers to toxic chemicals. In addition to requiring MakeUp Eraser to add a warning to its cosmetic bags, MakeUp Eraser was required to pay $3,000 in penalties and attorneys' fees.

In its statement to New Times, MakeUp Eraser did not address claims that its products contain DEHP.